Cherry Blossom Viewing- A “How To” Guide for the Novice

I`ve been remiss as a blogger covering Japan given my lack of attention to “Hanami”- loosely translated as “viewing of cherry blossoms.” I`ve felt a hesitation to do so given the ubiquitous coverage and adoration piled upon the petaled pink crack however, there are vital cultural aspects which must be highlighted prior to embarking upon a Hanami session solo or with a group of novice friends. Following these instructions will at best garner an invitation to join a tarp and at worst prevent the appearance of a tourist intent on a photo-op.

Warning: The behavior described below is not typical. During this two weeks of the year, New Orleans and Tokyo become sister cities in every aspect, thus placing them firmly in Ouisar-san`s “Top 10 Most Entertaining Cities to Visit.” Instead of fighting over beads thrown from parade floats, people of all nationalities vie for the best position under the trees.

1) It will be crowded. It will be loud. You and the 31 million other people living in Tokyo will all be in the same park at once.

On any given day in Japan, the most populated city in the world is also dead silent. No traffic noise, no honking, just the high-pitched screeching of Ouisar-san yelling at her Offspring to bring the breakfast dishes to the kitchen. I recently complained to my Japanese sensei that I speak decent Japanese, but I can`t understand a word of it- maybe because I can`t hear anyone talking back to me.

Every person in Japan abandons ship, drops all scheduled activity at the first ear drum shattering pop of a cherry blossom, snaps the blinds shut, hangs the “Closed” sign, buys a bottle of sake and a bento and trains, bikes, walks, hops, limbos, pogo sticks or uni cycles toward the cherry blossom viewing spot of their choosing.

Just like a feast fit for a Dr. Seuss banquet, most bring at least one of their clang clangers, robot bing bongers, heli pod pounders, and any other assortment of the loudest instruments banned by their apartment complex. Add to this mix of pitifully played loud instruments the sound of 31 million residents rejoicing in various octaves and pitches a cacophony of different songs simultaneously sung and any visitor can follow the pandemonium to the cherry blossoms without having a map of the exact location.

2) There`s not enough room for 31 million people under the cherry blossoms.

“no really, you first”

For Hanami only, a rarely seen behavior is observed. 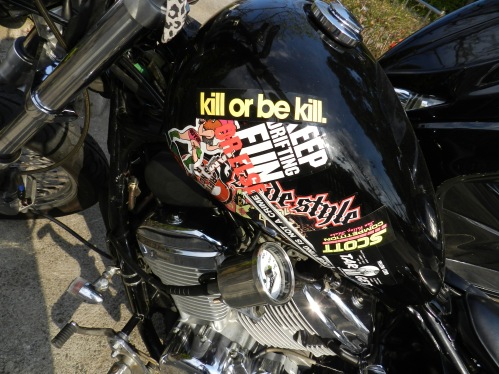 The Japanese prefer not to resort to such tactics and have employed a very effective alternative.

3) Get There Early or Send the New Guy

On April 1st of every year, the most recent class of college graduates all start their new jobs. This particular date was set many generations ago so the new recruits can go to the cherry blossom viewing site of the company`s choosing and hold a spot until everyone else gets off work. 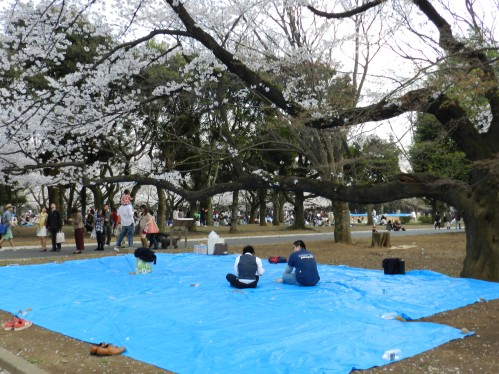 This spot is guarded closely by the junior team. This father thought to use his toddler-aged daughter as a decoy for encroaching upon the site however, one of the top-notch recruits spotted the juvenile ploy immediately. 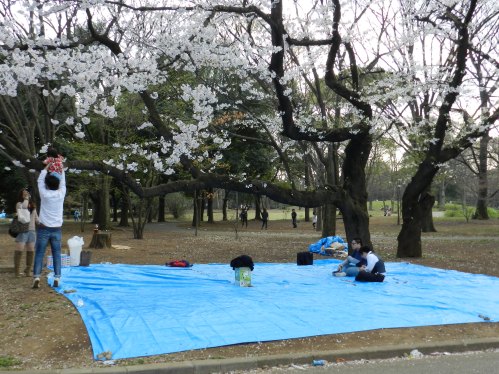 Others ensure that the spot is safe from intruders by placing heavy items of food in the middle and roping off the perimeter. If necessary, rocks are either thrown or used to beat invaders. 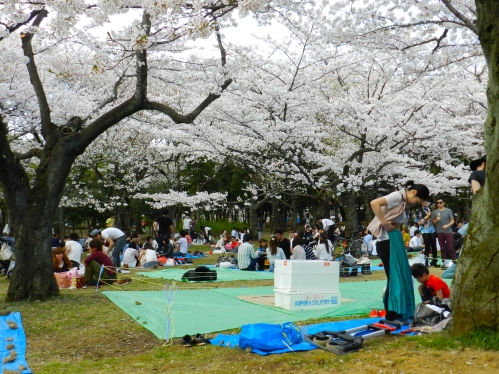 Arriving late without  a spot can be solved by scouting for an entertaining crowd in one`s best outfit. A snappy outfit and along with an “I`ll add entertainment value to your tarp” attitude may result in an invitation to join. 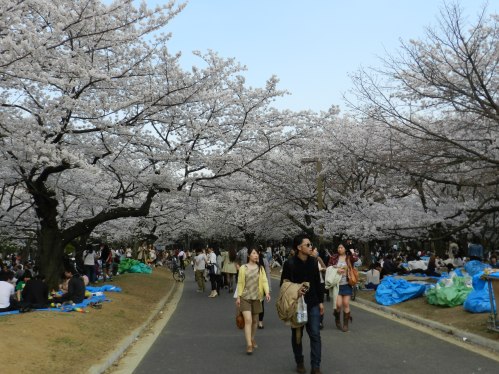 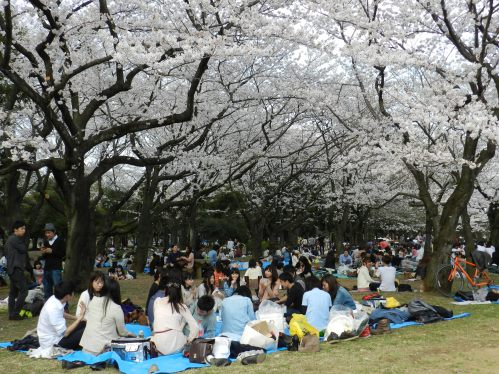 For dogs. We all know that washing hands can prevent the spread of germs and allergens.  Although many parks contain water fountains, it`s advisable to carry your dog to prevent the monotonous repetition of washing 4 paws. 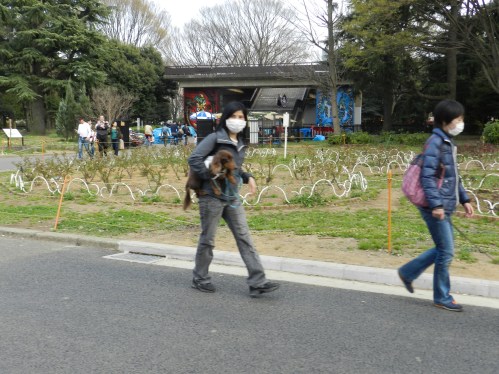 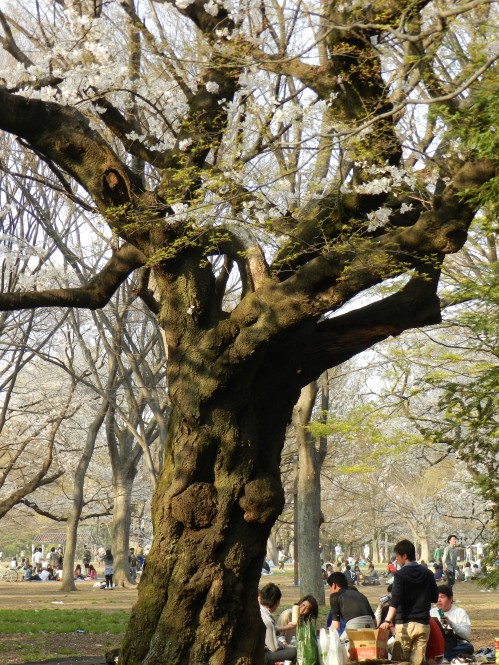 6) There are Many Places to Enjoy Cherry Blossoms.

These truck drivers have a wonderful spread inside the cab complete with alcohol free sake and Costco sushi. When I passed they were enjoying a post lunch siesta. 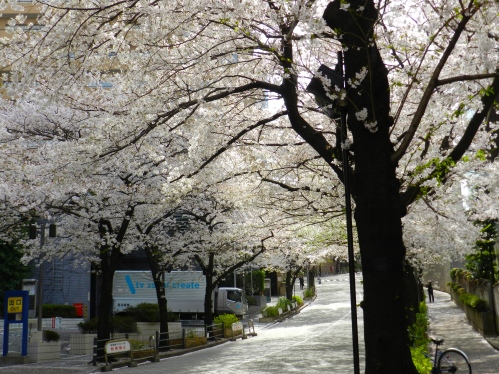 Spouse is a multi tasker. Therefore, he goes to Yasukuni Shrine where he can view cherry blossoms and his favorite sumo wrestlers at the same time. I was thrilled to hear he and Andretti-san were picked out of the crowd by sumo scouts as potential recruits based on the way they threw rival onlookers to the ground when storming their way to the front for a closer look. 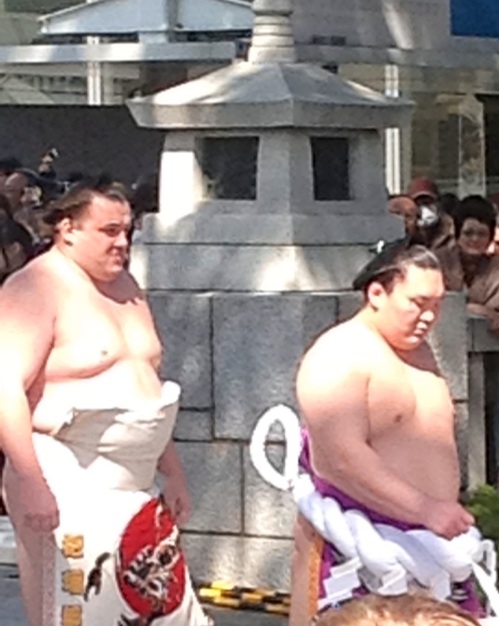 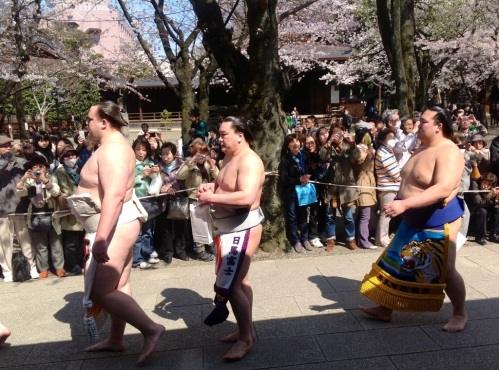 I`ve heard those big bags are sold at Costco. 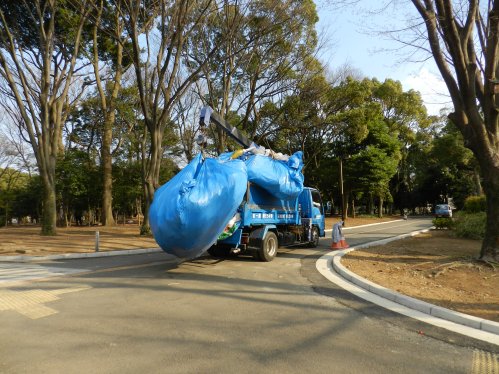 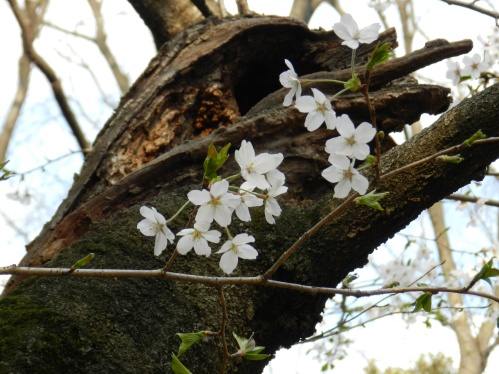 How can a tree that always looks as if it`s dying consistently surprise me when it miraculously sprouts blossoms out of nowhere?

Well- that`s the end. Of the Cherry Blossoms. 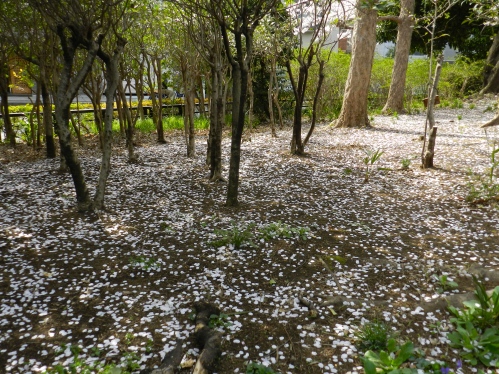 Every single town where at least two people reside hosts some sort of annual celebration for which it`s famous- and maybe even there`s a queen of said festival. What causes the folks in your town to shut down the post office for some hootin` and hollarin`?