Dear Jalen, This Won’t be Covered at Training Camp….

I’m a 55-year-old, menopausal woman who blogs about culture and travel. Most of your fan base would assume that I’ve got nothing in common, and nothing to say, to a 21-year-old Heisman trophy finalist about to take on the quarterback position for the Philadelphia Eagles.

Those armchair quarterbacks would be wrong.

So hear me out Jalen. I’ve got your blind side. You’re about to move to Philadelphia to pursue your dream job and I did the same in 1987, but there’s something I need to warn you about that won’t be covered in the Eagles’ Training Camp.

Around here it’s commonly referred to as Quaker Shock, since the original rabble rouser, William Penn, kicked off this culture back in the 1600s.

William Penn yells at people passing by from the top of city hall.

It’s going to hit you harder than a 360-pound lineman.

Here’s what you need to know about your new home in order to avoid ending up in the fetal position begging to get on the first Southwest Airlines flight home.

Your hometown of Houston is known as the melting pot. So is Philadelphia- the melting pot of weather. It has the wind of Chicago, the grey days of Seattle, the cold of New England, the humidity of Florida, and the heat of Houston. During the course of a year, you’ll experience all the natural disasters. Flooding, tornadoes, blizzards, earthquakes (potentially this one is unnatural and  caused by fracking but that’s a technicality) hurricanes, and plagues of locusts. I haven’t experienced a dust storm yet but that’s probably because it rains so much the mud can’t take flight.

The biggest issue for you will be the snow. It won’t disappear within two hours of falling like it does in Texas. It will melt just enough to turn into a black, greasy sludge. Then it will freeze into a sheet of ice overnight. You’ll be cruising down Market Street at 15 mph and 1776 will pop up out of nowhere and take out the underbelly of your new car. 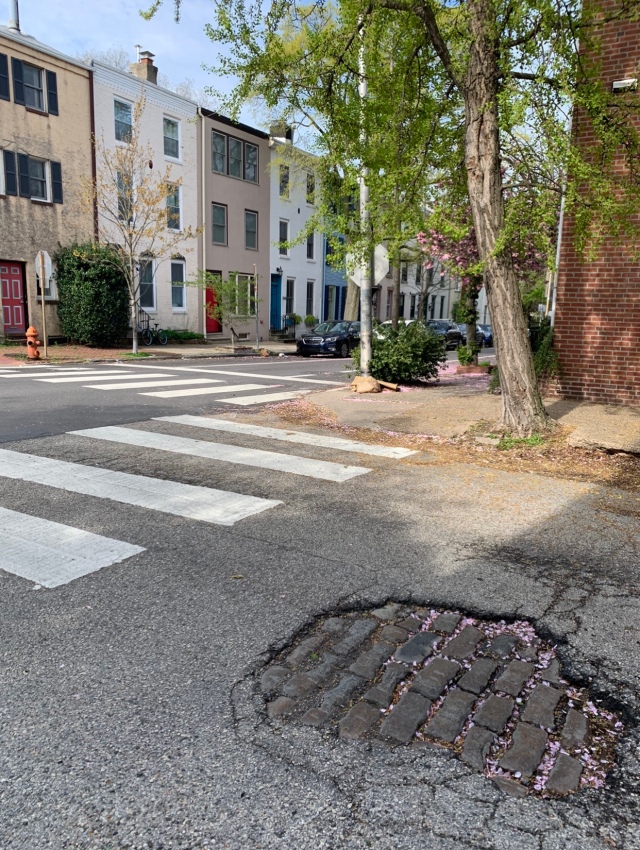 Cobblestones breaking out of the asphalt. Just waiting for you to drive over it.

Philly folks rush out during big snows to justify their purchase of that four wheel drive Range Rover. The only four wheeling it usually sees is on the highway down to the Shore.  (Translation- the beaches of New Jersey) They’ll all hit I-76 trying to outdo each other demonstrating slide techniques.  I-76 is the most dangerous place to be on a snow day. If the snowplows don’t hit you, the careening Range Rovers will.

Technically, the portion of I-76 that runs alongside Philadelphia is called the “Schuylkill”(Pronounced “school-kill” ) in honor of the river it runs along. If you can say Schuylkill correctly, you probably live here; if you can spell it you were probably born here.

Jalen, do not, under any circumstances, swim in the Schuylkill like those Country folks in Texas sometimes try to do during flood season. The pollution will kill you long before you drown. If that doesn’t get you, the eels will. If, however, you find yourself in these unique and dire circumstances, Philly is the best place to be. The river will carry your limp body right past the University of Pennsylvania Medical and Veterinary Schools. They’ll scoop you right out of the river to revive and sew you up in one of their fancy Ivy League labs.

Honey, you’re gonna need a real coat. Hopefully your parents didn’t get their education at the over-hyped “School of Hard Knocks” where offspring are forced to learn life lessons under extreme and often life threatening conditions. My Dad got a fine education there. My Canadian father, having fled that inhospitable place as soon as he could, let me fly out of Houston Hobby Airport wearing a coat that had more utility as a bathing suit cover.

I’d never seen snow before. My parents had a “Been there done that” attitude when it came to snow and made sure vacations had nothing to do with it. On the worst icy day of the year, I set out to practice driving. I thought snow and ice were the same. I slammed on the brakes in the rental car going about 45, bounced off the curbs along the street like a bowling ball hitting a bumper and flattened three of the tires. Have one of your well weathered friends take you to the King of Prussia parking lot to teach you how to drive. Or even better, get a driver.

You may have heard the infamous story of the Eagles fans throwing garbage at Santa during a half time show. There are many theories and cultural explanations for this, however, it was simply weather related. Santa bobbed out on the field in his bright red suit and it was like waving a flag in front of bull. His grinning mug and celebratory red outfit marching down the sideline wasn’t bringing a win- it just reminded the fans how damn cold it was watching their team lose. So the Eagles fans threw garbage to warm up.

Before you judge, remember that Eagles fans don’t have nice stadiums in which to learn a lot of football etiquette like we do at Alabama, Oklahoma, and Permian High School. No Friday night lights here. Fans of all genders watch football just like they learned how to play it growing up; it resembled both a football game and a wrestling match. The enthusiasm had to make up for the bottle caps and cigarette butts on the field. They warmly recall the team moms rolling around on the 50-yard line throwing punches over the kid who couldn’t play because he was over the pee wee weight limit by 2 ounces.

Anyway, you and I both know damn well that if Jesus walked on the field at an LSU game they would have pelted him with empty flasks just to see his reaction.

Philly has a reputation for being a dangerous city. And it is. When you see this:

Geese will hunt you down with more ferocity than a herd of pointy tusked javelinas. The man in the situation above was lucky. He found refuge in a bathroom before the nesting geese tore him limb from limb. Every time he tried to escape they chased him back in. They even hissed and spit at the Border Collie let loose to shoo them away. He was lucky that I didn’t take a picture of him quaking in his running shoes as the firemen conducted the nail-biting rescue. Believe me Jalen, after a few seasons here, you’ll be less afraid of running a quarterback draw through the one hole when the defense is showing a double A Gap Blitz  than an 8- pound Canada Goose.

And here that gets us to the people.

In the South, when you’re in the line at Starbucks, you generally chit chat with the people in line with you. If you don’t, they think there’s something wrong with you.

Up here, if you’re standing in line at a Starbucks, DON’T TALK TO ANYONE. If you do, they’ll think something’s wrong with you. (They’re also very hard to understand so it may take a while before you know terms like jawn, wit, whiz, souff, and wooder ice)

Just about the time you’re ready to call a Hail Mary before heading back home, something will happen like this:

I rushed out in the rain to chase down my neighbor, Mike, who was walking down the street. I had a package of his.

I called his name. No response.

I went on to the sidewalk, barefoot, and called him louder. Nothing.

I started to run through the downpour to catch him.

Then a guy behind me who looked like he had just stepped out of a huddle from Superbowl VII yelled,

“YO MIKE” in a voice you could’ve heard clearly through the din at an Auburn Alabama game.

And just like that, you’ll find you’re arguing with people about whether Pat’s or Geno’s has the best cheesesteak, or you’ll walk to the train station and be in New York city in an hour and a half, or Washington DC in about the same. You’ll go to the shore and realize that walking on the boardwalk is easier than the sand.  When people tease you about saying “Yall” you’ll pop off a “Youse” retort.

And just so you know, Auburn fans are everywhere. This Auburn fan duct taped egg crates onto the back of his car to protect it while parallel parking.

So Jalen, here’s my point. It’s different. It takes some getting used to. But you will. And you’ll have a ball.

And when you doubt that, my Clampitt family will have a meat and three ready for you when you need it.

24 Responses to Dear Jalen, This Won’t be Covered at Training Camp….