No matter what the country of origin, religious preference or family upbringing, there are certain irrefutable facts about boys. 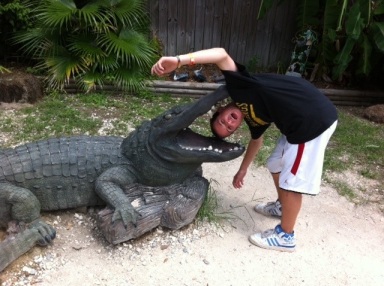 5) tend to accidentally kill small reptiles and amphibians who mistakenly cross their path- See “Kermit Gets the Cold Shoulder” from “Some Species Eat Their Young” here.

6) will jump in or over every puddle, stream or spilled beverage- with predictable results

7) and lose anything of value

Which is what happened to Offspring #1`s wallet. Since it wasn`t velcroed, taped or stapled to his person, it “disappeared” on the Tokyo Subway. During rush hour. With 25 million other commuters on their way home. With $100 his wallet- which explained where his lunch money has gone.

St. Anthony and I had our daily chat during which I asked for his celestial assistance in locating yet another lost item.

Being a responsible kid, he searched his pockets, swiveled his head up and down the train platform, and declared his search complete. Only now he had no money for train fare. He was forced to call in.

Ouisar-San to Offspring #1- ” Before I come get you, just check in lost and found at the main train station. Maybe an angel happened to find it and turn it in.” This said calmly as I kicked the window sill sending the crows flapping, the f word screaming through my mind.

Visions of the victory dance the lucky finder did upon discovery of the loaded wallet stomped through my head. Followed by images of  the dinner Offspring #1 had now purchased for this charmed finder. Or drinks. Or who knows what.

“Mom- it was in the lost and found at the station. WITH ALL THE MONEY IN IT!”

St. Anthony and I high fived, knuckle bumped, and completed our routine with a chest bump.

Only in Japan, during rush hour, would someone find a wallet, and not only turn it in, but do so without emptying first. Perhaps it was karma returning from the time I found a purse lying in the street, with the wallet inside, with all the valuables so neatly arranged inside, turned it in to the local police man on the corner. I guess the culture has transformed me. I`ve become honest at the expense of my own financial gain.

I love it here.

38 Responses to Only in Japan