As I slowly and deliberately eat my way through Japan, I`ve discovered two certainties regarding the food- first, Japanese food does not include chicken teriyaki, and second, sample even the most repulsive in appearance- it could rank as one of the best meals of your life. My latest favorite, monjayaki resides in the category labelled, “Looks nasty, tastes great,” as it closely resembles a myriad of substances one would only eat under the threat of torture or starvation. 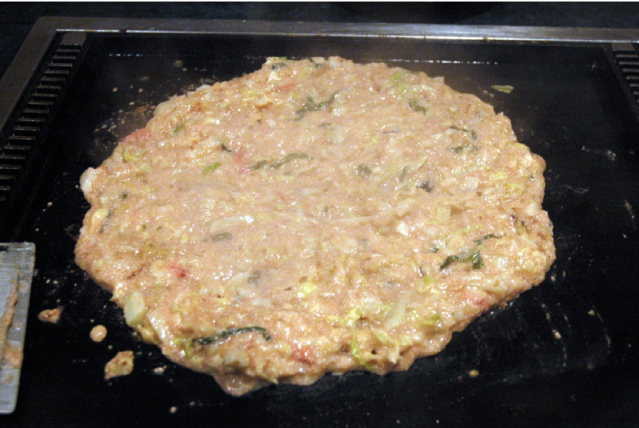 Andretti-san, culture guide and sensei to the Clampitt clan, had been bragging, loudly and consistently,  about his culinary skills most effectively demonstrated in the creation of monjayaki. It was time to hold his feet to the fire, or hand to the griddle in this case. But how to highlight his culinary chops outside of his own kitchen?  An island in the middle of Tokyo, Tsukishima. Home to an entire street specializing in monjayaki with the creative name, “Monjayaki Street.”  Patrons were allowed to ruin the meal themselves by self cooking or assure a more savory product by engaging a server to conduct the official business.  The time had come for Andretti-san to roll up his sleeves. 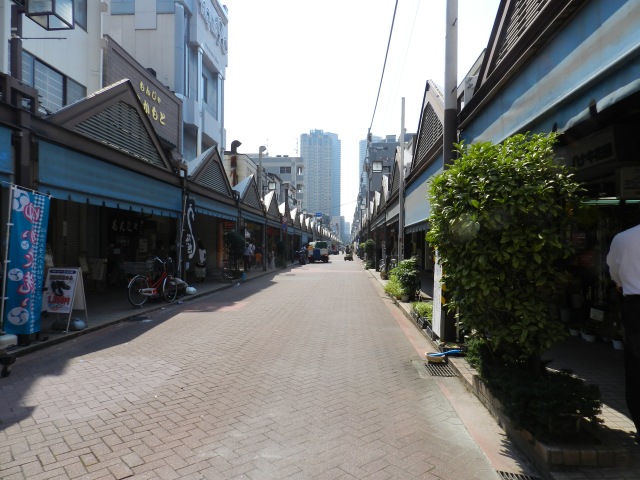 Our restaurant choice was driven by creativity of the logo rather than reputation.

The ingredients were promptly delivered table side.

Several items caught my attention as the bowl was placed between us. First, the dried shrimp on the top, meat like substance Andretti-san identified as corned beef, bonito flakes (the olive oil of Japan) and the presence of a viscous, yellow soup at the bottom. Eating any one of these items would have been difficult but the thought of eating the mixture was appalling.

He started by stir frying the ingredients at the top. I lost hope of stomaching this meal as I watched the tiny shrimp melt on the grill. 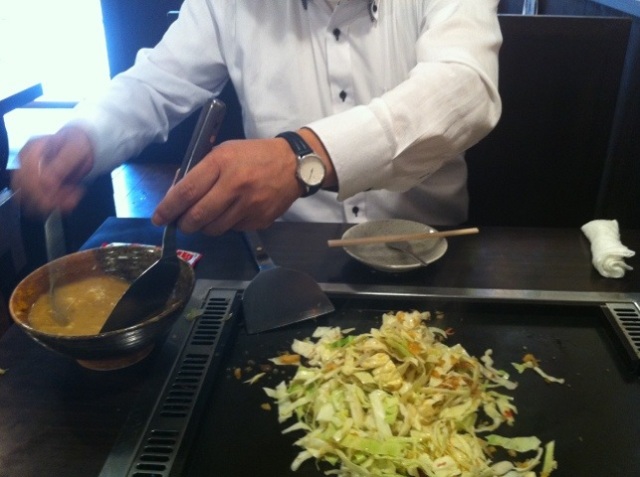 Once the ingredients were cooked, he shaped them in a doughnut. Inside the hole, he poured the liquid. Apparently his doughnut hole was perfect since the soup did not leak out of its stir fried container.

Once the mass was gelatinous, Andretti-san stirred it all together. The color changed to dark yellow. He pronounced the putrid, yellow mash “Done.” Oh God. The time of reckoning. I`d seen more appetizing mud pies.

As if tasting it wasn`t enough of a challenge, there was also a particular method for devouring this goo. Not quite a liquid, not really a solid, a special tool called a “hagashi” is used to shovel this tasty delight in to one`s mouth. Right off the hot griddle. Too soupy for chopsticks, but very gluey, it stuck to the hagashi. Therefore, it was eaten like so: 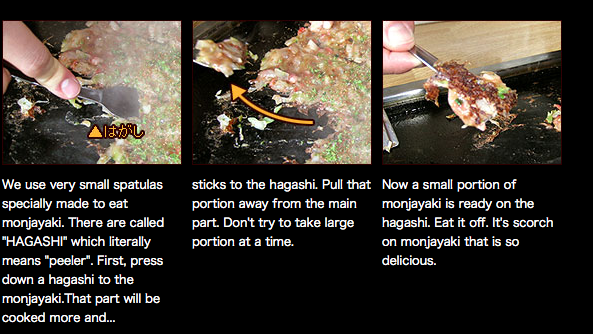 Monja aficionados claim a special technique for proper eating- placed in one`s mouth with the food facing the tongue, versus the roof of the mouth, in order to deliver a more powerful piquant punch.

In some way, which I`m certain defies the natural order of the universe, this concoction was delicious earning a coveted top place spot on Ouisar-san`s “Must Learn to Make Before Leaving Japan” list. Tiny dried shrimp and all.

Andretti-san validated his claim as Master of the Monjayaki and the Nose claimed this to be the only form of cabbage she would eat.

Check out other “Best Of Japan” at Japingu`s J festa….here

61 Responses to Please- Don`t Make Me Eat That- Monjayaki