I Found Drogon….And Flowers…. In The Desert

For the Big Money:

Q: Why is California called the Golden State?

Not the gold rush

Nothing to do with golden tans (or bronzer)

That’s right. The hills of California are usually gold. But when it rains, odd things happen. Usually in the desert. Things turn green and chaos – well you know the rest.

Offspring #2 and I had heard of a mysterious flower bloom in the desert of California due to the unusual amount of rain. We found it easily as the news had been posted at all the “Good Sam’s” camper parks throughout the US. We just followed the five to seven million RVs and Motor Homes converging on a windy, two lane country road headed in that direction. These were not the pop up camper vans many of us     camped in as kids but the super fabulous rock star type four bedroom motor coaches. They don’t corner very well so the curvy road wasn’t dangerous as we were behind them all doing about 20 mph at top speed. We got to enjoy ALL the scenery.

Including the Julian Pie Company.

This bloom happened to be at Anza Borrego Desert State Park.

Offspring #2 and I had something more tropical in mind. We were picturing something akin to a Bird of Paradise, the desert version. We weren’t sure we were actually in the park however we had seen several cars parked along the side of the road- we had passed the sign announcing the entrance. Usually a lot of cars parked alongside the road means a good spot to fish, just like a long line to a restaurant indicates a good place to eat, so we stopped to find out the source of the draw. We found many bucket capped folks wearing those hiking pants that one can zip off and make in to shorts, lying on the ground. Taking pictures. Of very small flowers. 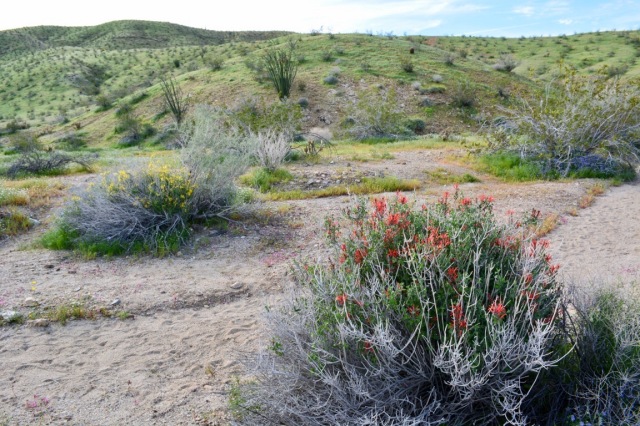 We were kind of underwhelmed. But we copied everyone else and took more pics.

We also noticed that some people just drove along a loop and stopped at various spots. It’s here where things got weird.

We did not expect to find a T-Rex.

We debated if this was St. Francis or Shrek. Hard to tell. Fiona?

But then, we found the answer to everyone’s GOT question. Where did Drogon go? Does he have a summer locale? The answer is yes. He’s snow-birding at Anza-Borrego. 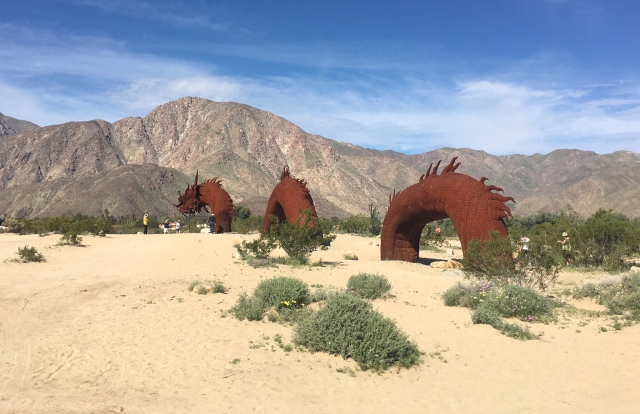 There were other sculptures but we decided to head back toward the Julian Pie Company for second round.

When the flowers aren’t in “full bloom” I guess walking the sculptures is like doing the stations of the cross.

Go early. It gets crowded! And hot. Notice there are no people climbing on the back of Drogon. He can burn you from the inside or the outside.

4 Responses to I Found Drogon….And Flowers…. In The Desert