I love shabu shabu although I’m not sure if I like eating it as well as the motions of making it. A Japanese equivalent of the Chinese Hot Pot, this dish gets its name from the sound of the stirring motion in the hot liquid and means “swish swish.” On our recent trip to Niseko, I ordered shabu shabu so the rest of the family could give it a test drive. Here are the results of the taste test:

I ordered pork shabu shabu with tempura. The covered dish contains boiling water for cooking the raw meat and vegetables pictured above. What you can’t see – because I apparently neglected to include in the picture – is a small bowl with a delicious broth.

Instructions go something like this. Drop the various raw vegetables, tofu and whatever else is given- usually it’s seasonal- in to the boiling water. Then take a piece of meat with the chopsticks and swirl in the boiling water until it turns white. 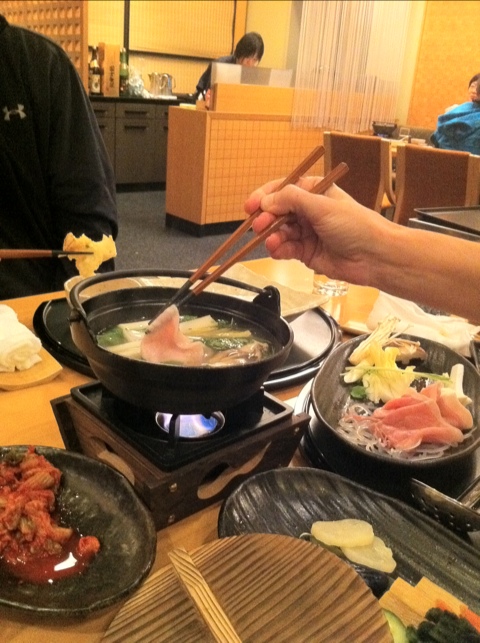 Once the meat is cooked- it is then dipped in the bowl of broth (again- not pictured) and eaten. Shabu shabu presents a challenge for the chop stick challenged. I consider myself victorious when a food makes it from the raw plate, through the cooking phase, to the bowl dipping phase, and then my mouth without getting dropped along the way and/or splashing everyone at the table. In fact, everyone else considers that a success also as I’m considered the chop stick rookie in the family.

The Offspring made it through the raw meat arriving at the table, and thought the taste was acceptable but balked at the straining the fat off the boiling water phase. 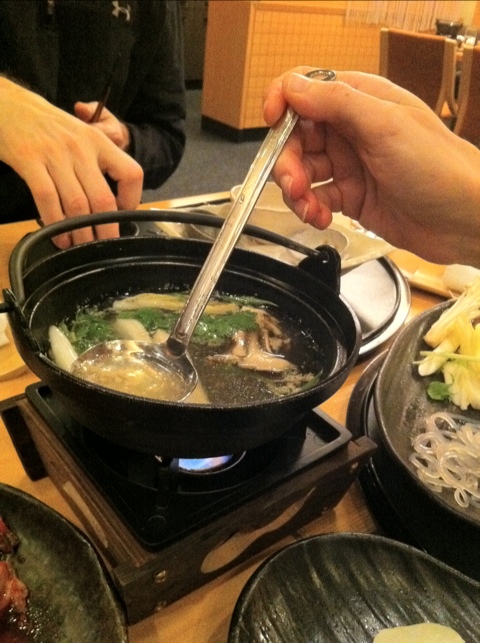 The fat does rise to the top and needs to be scooped with a special spoon. It is then discarded in another bowl. That put the Offspring off permanently on shabu shabu. Which meant more for me.

The final stage involves cooking the noodles and finishing with drinking the broth. I love an action packed meal.

Like Loading...
This entry was posted in Food, Moving to Japan and tagged Family, Humor, Japan, Moving, Offspring, Tokyo, Travel. Bookmark the permalink.