Japan changed me. In a bad way. If you had told college-aged Ouisar-san that she would skip her daily afternoon nap in order to take pictures of a flower field, I would have instructed you to put down the crack pipe. But it happened. Twice.

The first time I drug along a bribed participant, my step-sister, called Lil’ Yale. She’s about fifteen years younger than I am and whether or not it’s a good idea, tends to be game for just about anything. I’ve been dragging her around for several decades, but thus far she hasn’t realized “no” is an option. Only a big sister’s muscle would get a little sister to pay $20 for a hillbilly ride behind a tractor, driven by a faux farmer, to look at flowers.

I was caught in the spirit of “Mono no aware,” the Japanese concept that translates as “the pathos of things.” Enjoying and appreciating something that won’t last forever. In the US, we are most familiar with this term when it’s pumpkin season at Starbucks. Pumpkin spiced lattes, pumpkin frappucinos, and cream cheese stuffed pumpkin muffins turn Americans orange, the hue of our current president.

When I coerced Lil’ Yale in to visiting the Carlsbad Flower Fields in California, it was a cloudy and cold day but the flowers were in full bloom and they were stunning. Lil’ Yale won’t let me post any of the pictures of her with arms upraised to the sky, her back to the camera, in full on Instagram pose mode.

She’s somewhere in the sweet pea maze below. It took her a full 60 seconds to find her way out. I’m convinced she cheated. I think she actually saw the awning of the strawberry tent in the distance and hurdled the “walls” of sweet pea plants to be first in line for strawberry shortcake. (Strawberries are grown in an adjacent field)

The Pacific is a gasp-inspiring backdrop to the ranunculus flowers. The Carlsbad flower fields were started in the early 1900’s with just two colors. Now after generations of mutations, there are at least fifty different shades. 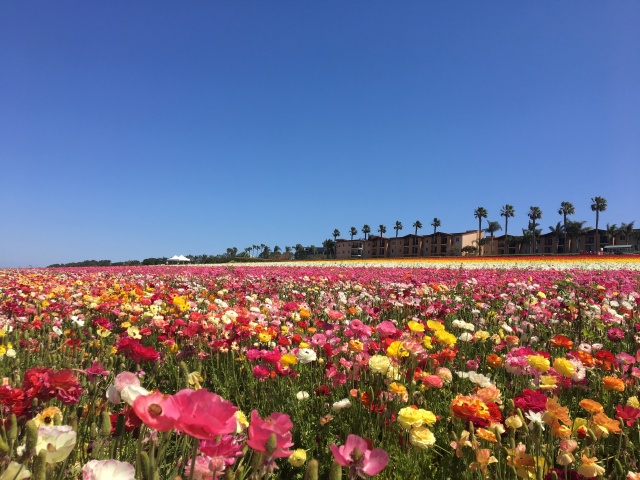 A few delphinium for diversity.

April and May are the prettiest months for flowers in California and the weather is perfect. Don’t tell.

Like Loading...
This entry was posted in Uncategorized and tagged california, Carlsbad flower fields, Culture, Flowers, Hey From Japan- Notes on Moving, Humor, Mono no aware, Travel. Bookmark the permalink.

19 Responses to “Mono no aware”