Posted on September 6, 2016 by Emily Cannell

Japanophiles think they know all there is to know about what makes Japan so uniquely unlike every place else on earth. We`ve all seen the “Top 10” lists that include the vending machines, the manga, the robot bar, and the parasite museum. But let`s not be afraid to point the finger at what so many women clad in blue suits have been sporting with such panache.

Nails as an art form.

Essie`s recent campaign does a poor job of framing this issue. 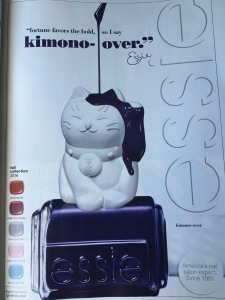 Cute names and lovely colors, but nothing near what a self respecting salary woman would sport. A great example of what we have here. A nice shade of one color.

For examples, I had to call in my favorite nail art afficionado who can`t be named. But whose name looks a lot like “name” but sounds more like “Swami.” She took a few pics of her latest creations.

Starting with the simple- in a hurry- only have to time to bejewel one nail today.

Next on to a more individualized look but still rather subdued.

And to the final piece certainly worthy of a spot in the Mori Tower:

I`d had way too much sake when I took this picture, but these even have small sculptures.

If that doesn`t impress you, how about this?

This from my friend who`s not only creative with her nails but can also help your kid write an essay that will get them in to any college, anywhere, no matter what their SAT score. (here at EXPAT Essay)

On balance, my nail salon, as in the one I frequent not own, does offer a French Manicure done with glitter. Yawn.

Next time I`m in Japan, I`m bringing back some “expertise” in my suitcase.

If you have any pics of nails to be proud, please do share so we can all ooh and aah!