There are a few things which should only be done in a lab setting. With safety glasses, a lab coat, and a glass hood under which flammables and other explosives are tested; maybe a hazmat suit for added precaution. Certain things come to mind as appropriate for managing within a controlled environment such as a lab. The Zika and Ebola viruses. Not something you want all over your person when arriving home after work as an example. Being overrun with dogs and kids upon your arrival, transferring any virus particles is a great way to ensure it has taken up residence in your own home as well as the rest of the neighborhood.  Rocket fuel. The stuff is so volatile a sneeze can set it off.

I`m going to add another thing to my list of items to be managed within a lab.Preferably an underground lab buried several stories underneath a desert.

A combination of blowfish and sake. Each is deadly in its own right. Add them together and bad things are going to happen.

Which is exactly what happened when some friends of mine and I got together for Sunday lunch at a blowfish restaurant in Tokyo. 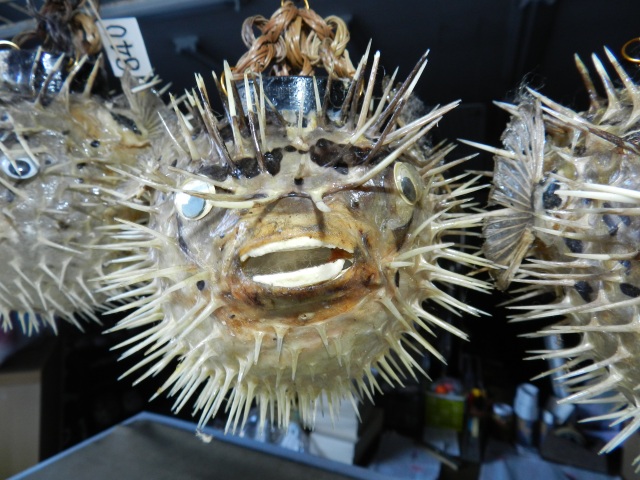 This puffer either overdid the teeth whitener or had some false teeth added posthumously.

Previously thought to be a deadly meal due to a liver full of poison, many now speculate the Blow fish eats poisonous diet which it then passes along to any thing stupid enough to eat it. As if the spines weren`t enough of a reason not to put it in your mouth.

In Japan, chefs must have a special license in order to prepare and serve Blowfish- or “Fugu” in Japanese. In general, and for obvious reasons, most places that serve Blowfish only serve Blowfish. Usually in several different ways. Rumors abound that certain insiders to a chef in the know can be served fugu with just a touch of poison remaining. This kiss of poison leaves the mouth and lips tingly which apparently is worth dyeing for. Not me, I`ll take my kicks in other forms.

Which led me to the sake part of the equation. Once all other parts of the blowfish have been eaten- eyes, skin, meat, and other, its time to serve up the fins. Roasted, put in a hot glass of sake, and set afire, this will give your mouth a tingly sensation. This little ensemble is called “hirezake.”

Note: I`m not one of the speakers in the background. By this time my power of speech had reverted to that of a primate.

This lethal combo resulted in one of our group sleeping in the booth next to us while the rest of us converted the restaurant from a “Fugu” restaurant to a “Fugu and karaoke” club by singing 70`s dance tunes pulled up on YouTube.

Seriously good and absolutely necessary to be experimented with in a controlled setting. Or else.

5 Responses to Going Down In Flames-Hirezake