Fireworks in the Taya Cavern

There are usually 2-3 people in a location that seem to be plopped there to help usher you through the journey. So I feel really guilty that I`m about to laugh at this sweet woman`s expense, but I will. (Excuse me while I take a break to laugh- again.) Because I`m already feeling terrible about laughing- and writing -about this religious, church going, homeless feeding woman, I`ll go ahead and throw my friend the Social Chairman under this moving bus. It may have been her fault. It usually is.

The last time the Social Chairman and I were at a shrine we ended up in wedding pictures. This was right before the groom starting beating us with his fan. That wasn`t nearly as funny. 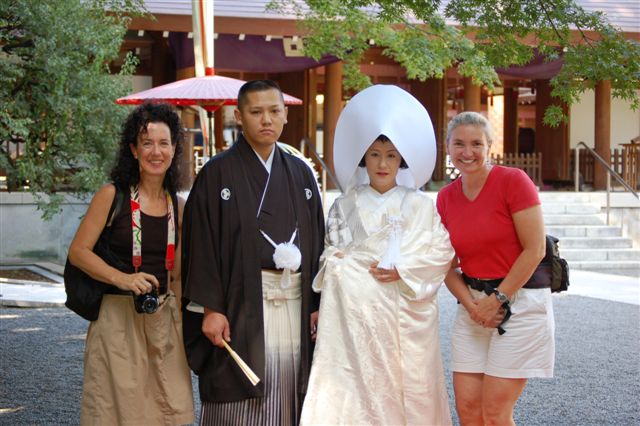 On this particular day we were touring the Taya Cavern at Jousenji Temple in Yokohama. Famous for having carved images of Buddhas and mantras in both Japanese and Sanskrit dating from 1192-1720. Not the easiest place to find. Follow the giant head you can see from the train station, from there start asking people. 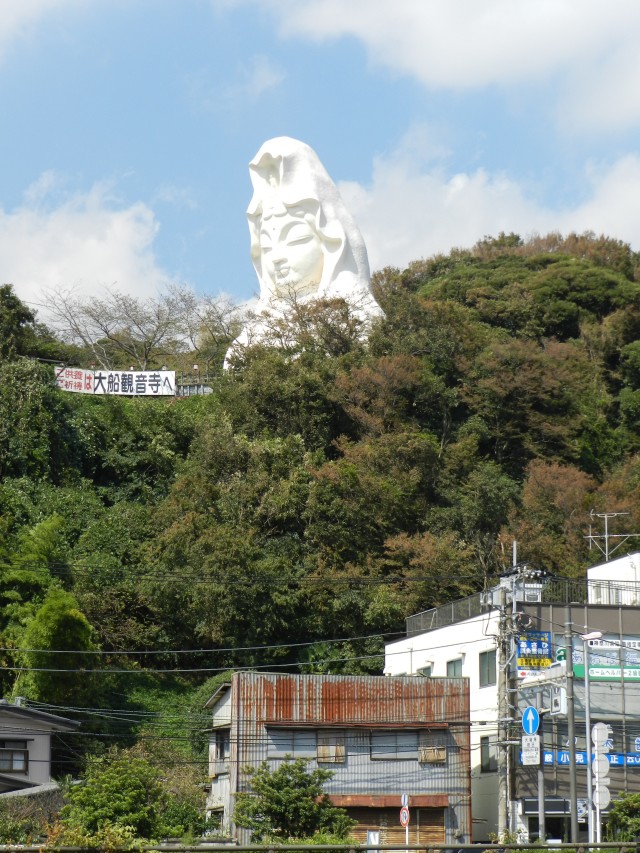 Not a part of the Taya Cavern- it would`ve been nice if her eyes had pointed the way.

The victim headed in to the caves. 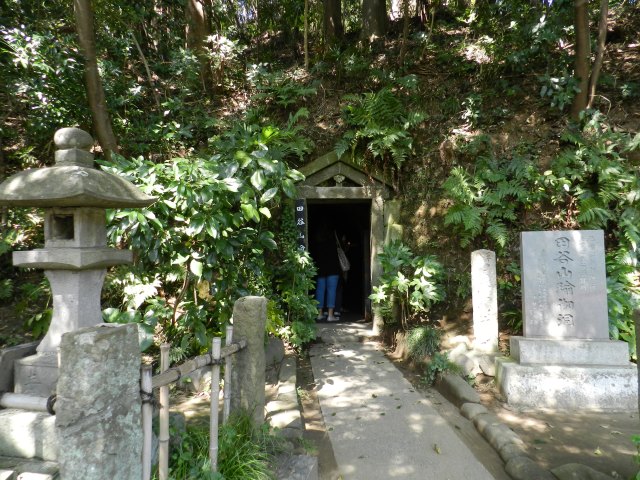 There are no lights in the caves so we were given long candles. No pictures were allowed either. Apparently flash is dangerous to sculptures. If Church lady wasn`t watching our every move we might have snapped a few pics, but doing so would have precipitated our ex communication. We would have to use great stealth in order to do it behind her back.

We followed Church Lady closely. I would then distract Church lady from the front – ask a well-timed question, invite her over to interpret some Sanskrit while the Social Chairman attempted to snap a few pics without using her flash from behind. This meant being absolutely still for the camera to soak up the little light present. My distractions had to be time-consuming and loud to flush out the sound of the camera. We shouldn`t have done it with so many deities present. The mojo was too bad and lots of sacred carvings, serious faces illuminated by candle light, were watching us. Disapproving.

SC moved the candle to her left hand as she tried to stealth snap with the right, Church Lady still positioned in front.

Then her hair went up in flames.

Our sweet church going, homeless feeding Social Chairman was on fire, framing the back of Church lady`s head with flames. I began to beat the top of SC`s head with my handouts. Which then caught on fire. The inside of the cave was now spectacularly lit by the human hair torch. All the other women on the tour seized this great opportunity to snap pics of the temple cave now warmly lit with the glow from a fire. Church lady continued down the hallway, talking and pointing while behind her a rebellious group of Catholic women were snapping pictures haphazardly hoping at least one would turn out.  One of the more quick-witted ladies, and might I add the only one to follow the example of the great saints, doused the Social Chairman with her precious bottled water, which I couldn`t do for choking on laughter and smoke fumes.

Her head smoked while the other ladies ran away from the scene as the Church Lady turned to make sure her charges were in tow.  The BBQ`d Social Chairman pulled chunks of long blonde hair off her shoulders. It was hard to breathe for laughing. Don`t get mad at me for laughing- she still had at least half of her hair. For weeks after, short random pieces of hair that had been burnt spiked off the tops and sides of her head.

I guess one should expect karma when in a temple. Other rule breakers and rebellious types have posted pics of the inside of the caverns- but I`ve messed with the karma there enough without linking to them from here.

Here`s a  link for Japantravel.com with lots of good info on the cavern…

7 Responses to Fireworks in the Taya Cavern