Dear Spouse, I`d like an RV for my Birthday

During the six days of driving it took Offspring #2 and me to cross this great country, I came to the conclusion that an RV would have preferable to the Toyota we had to push half the way to California. In fact, there are several reasons that I NEED an RV- and I think you`ll want one too once you get to the end of this post.

So, the question is, why would I want an RV in the first place?

Interactions with People I Don`t Know is Close to 0

I`m an introvert which means I prefer to keep conversations with people I do and don`t know as short as possible or, in an ideal world,  avoid them all together. In general, people like me much better the shorter the interaction. So, when I can avoid conversations with a smile and a wave, I am much more popular. Win-Win. Driving an RV would allow me to minimize all those conversations forced when staying in a hotel.  The higher end the hotel, the more employees will follow you around trying to engage in conversation.

There are always at least four people one has to interact with prior to reaching the safety of the hotel room. The more stars attached to  hotel, the more people and the more interested they are to have a long conversation. And now that Trip Adviser is ruling the travel roost, everyone wants travelers to have a positive, high touch experience. One bellman told me in lieu of a tip, he`d prefer an enthusiastic endorsement on Trip Adviser.

“Done, now every time you talk to me my glowing endorsement will dim proportionally”

Although I`d like to just silently toss the keys to a valet (If there is one, if there isn`t even better) it embarrasses my family. It doesn`t matter if there are 15 , 500 pound trunks loaded in to the car, I`ll lug them up myself to avoid talking to the bellman. In fact, I`m a better tipper if allowed to drag up my own bags. When the bellman`s in charge, it takes an extra 15 minutes to get your stuff because they are busy talking to all the other guests, who like to chat, on the way up- or worse- letting all those people ahead on the elevator thus slowing down the process further. Then there`s the front desk clerk interested in where you`re from. I learned a long time ago to hide my accent in order to avoid discussing how we hid from tornadoes in the trailer park. Room service?  I usually just have them leave it in the hallway- sort of like a delivery to solitary confinement in prison. (I`m assuming here) Then there`s the unbearable situation that can occur the toilet clogs, a light is out, I forgot the code to the safe holding a crisp $5 bill and someone needs to come in to the room for an extended period of time. Maintenance people don`t mind you looking over their shoulder if there`s some conversation in it. Add all these seemingly small conversations up and that`s 10 minutes I could`ve spent on Netflix.

For those of you not as well versed on the art of the road trip, without an RV, the best alternative to a regular hotel is a motor lodge where the rooms are lined up in a row. They are designed for sneaking around- whatever the reason. Park right in front of your room and walk the ten steps to the door. Almost as good as an RV except that at some point you have to stop for a key to that room. No one will complain about your dogs or the other things you shouldn`t be doing because they`re doing them too.

See Things You Can`t See from the Plane

I`m not very intellectually curious. I never got in to healthy debates with teachers or other motivated students about a topic because I really don`t care that much. But I do suffer from travelers fear of missing out- TFOMO hits me hard.  Which is the part of flying that urks me the most. As I look down from the window of the plane- my preferred seat – I wonder what`s below that I`m missing. Probably something thrilling- like the world`s largest golf tee, or something entertaining, like the road signs from my home state: 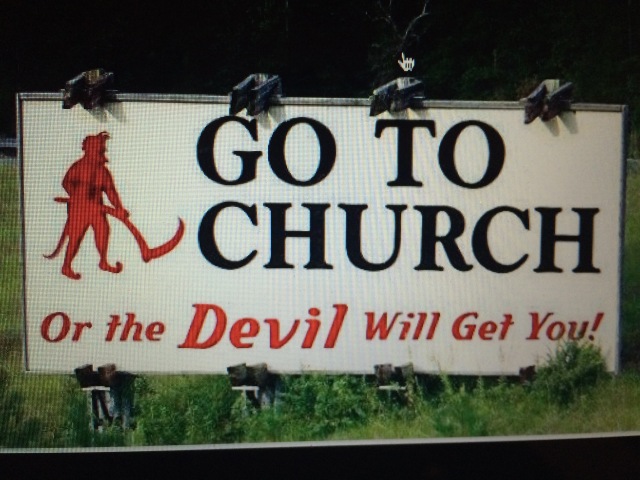 In a car, the more miles covered, the more in a hurry to get to the final destination, and the less likely one is to pull over to investigate some small, but potentially entertaining spot. With the handy RV,  pull over whenever the smallest stop promises even a small amount of entertainment because there`s always a Wal-Mart in the next small town when it`s time to call it a day. (Parking for free in the Wal-Mart parking lot has got to be fabulous. Just hang the “Beware of Dog” sign in the window to keep other RVers from inviting you over for s`mores)

As I discover every time I take a road trip, there are always places that I would never fly to see but I would stop if I happened to pass in my new RV.

Like- Santa Rosa, NM. Driving down historic route 66, which is now a parade of ghost towns, we found the home to the Blue Hole. Who knew it is a major dive destination. 100 ft. to the bottom- clear as a bell. 150 degrees outside and hardly crowded at all. Maybe because the dive in to the 65 degree water is dangerous to the heart. 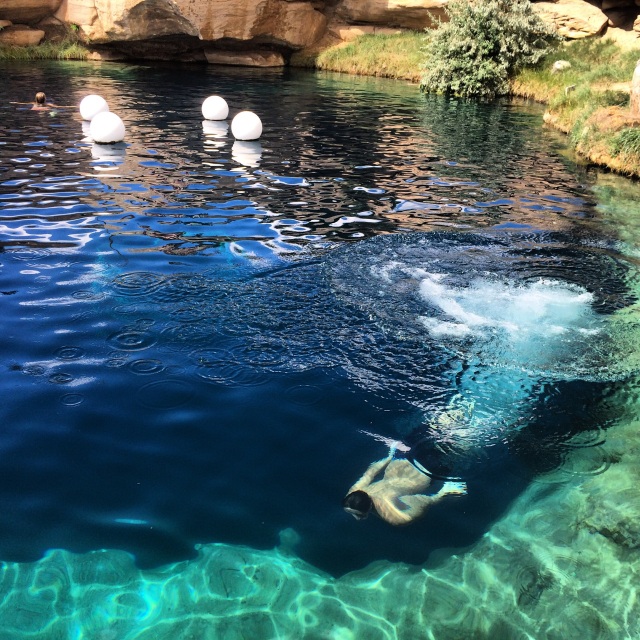 We got Spouse a new coffee cup- 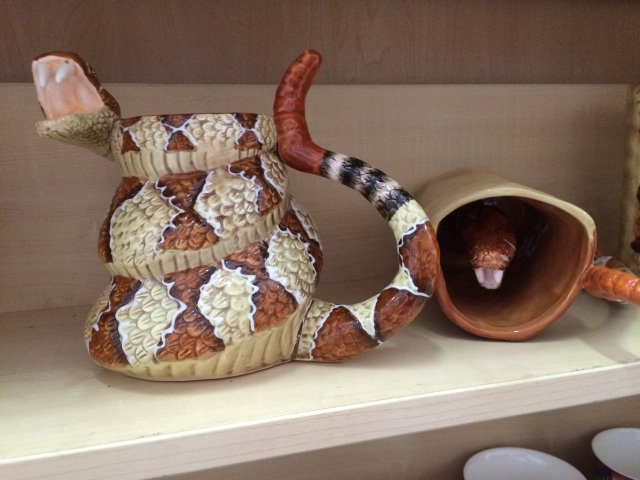 Further down the road was Sedona, AZ. Supposedly a vortex of crystal energy of all sorts. My mother was excited to know if the universe had shocked me upon exiting the car.  I don`t think I felt the shock of the macrocosm but it was certainly worth stopping for a hike. 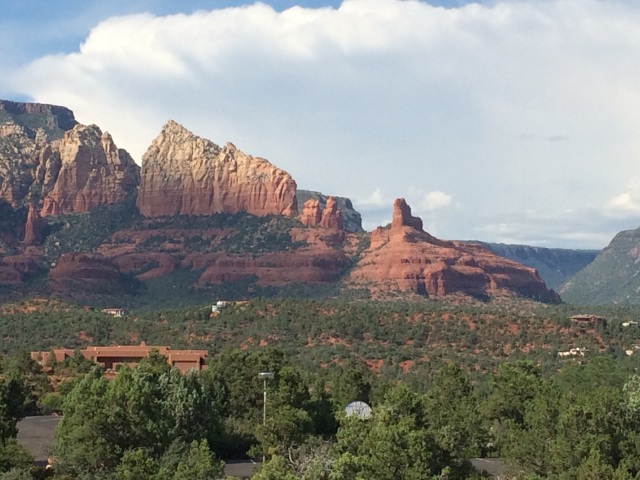 And coming in to California, these dunes appeared out of nowhere and disappeared just as quickly:

After reading ThirdEye Mom`s blog post about the Crazy Horse Memorial http://thirdeyemom.com/2015/09/09/pride-and-hope-at-the-crazy-horse-memorial/  I`d stop in if I happened to motor by in my RV.

A hotel room provides unlimited opportunities for injury. Take for example the suitcase jutting in to the middle of the room during the night.

I didn`t take this with an electron microscope but it is equally scary. My toenails aren`t black they`re just painted to look that way.

When the Drive is Boring, Turn it Over to Someone Else and Nap

We saw a lot of this on the Western side of our trip:

And a lot of this on the Eastern Side:

That`s when having your stock of coffee, half and half and sugar come in handy. Give the keys to anyone capable of driving in a straight line, grab yourself a cup, and relax on the couch playing Words with Friends. Or nap.

So there you have it. 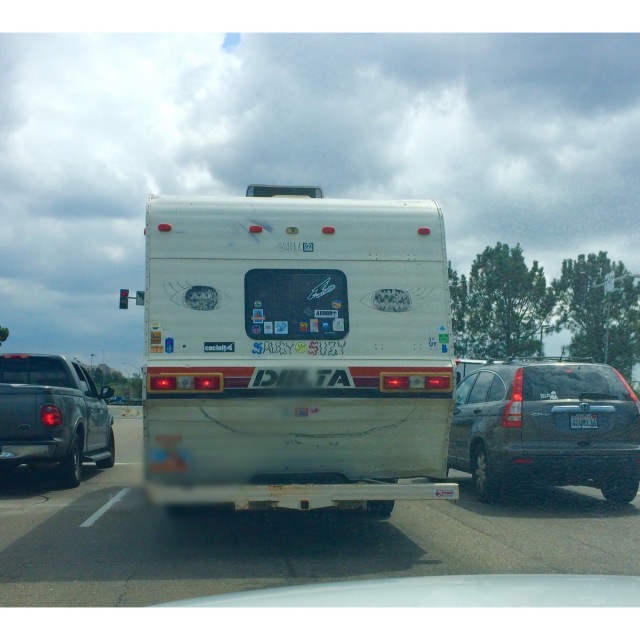 If you need more info on RVing- read Kathy`s account of driving one with her 90-year-old Godmother  https://reinventingtheeventhorizon.wordpress.com/2015/06/29/cold-feet-nylons-knee-socks-and-my-rv-adventure-with-a-spanish-dancer/

It`s a little more balanced in terms of pit falls…..

12 Responses to Dear Spouse, I`d like an RV for my Birthday