For the past several days I`ve been trying to figure out how the Cloud ate all my photos. The ones that hadn`t been consumed were permanently frozen on my phone, no longer available for sharing, emailing, or converting in to captivating blog posts. My computer became wary that I would carry out all threats made against it and embarked upon  a self healing process where poof! All my photos reappeared. My computer winking at me in the background. Some of these pictures have had me reliving painful memories of culture shock. So of course I thought immediately to share them with you. My culture shock seemed to revolve around withdrawal.

There`s not one grain of sugar in all of Japan. We immediately went in to sugar withdrawal, our serotonin levels dropped and we realized that the milk and pumpkin ice cream was about as sweet as it was going to get. 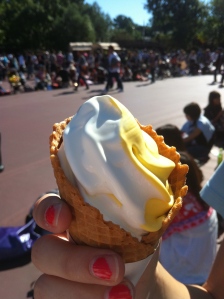 I kid you not. Cucumbers on a stick. No ranch dressing in sight. Salt? Only in soy sauce. My blood pressure plummeted in the absence of all dietary sodium. I became the zombified version of my low energy self. Spouse had to slap my face to force blood in to my brain. I traded salt and vinegar potato chips for dried fish with peanuts and shrimp fries.

The architecture seemed to be rated R. Asahi claims that this building is a replica of a frothy foaming beer in a mug. OK- what about the thing beside it? Is staring and pointing at a building as rude as doing the same to a person? I rolled my eyes toward the building and made grunting noises at Spouse to get him to look in that direction.

He was engrossed in the car covered in grass. The Chia Car benefited greatly from the rainy season and would take up two parking places until the next trim.

Peter Cottontail in a baseball cap was a morning commuter.

My “no touch” zone dwindled down to the small area on my face used for breathing. Where was my giant American car with space enough for all of these people to sit comfortably? Me yelling “Don`t touch me or my stuff” did not resonate. 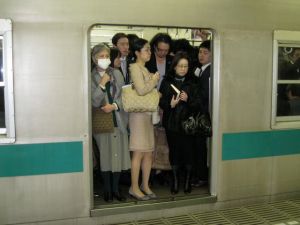 It took six weeks for this to become normal. In no time I was napping on my neighbors in the subway, yawning at the buildings, and happily chowing down on anything that sat still long enough for me to grab it with chop sticks.

10 Responses to Culture Shock In Photos