The Canada Goose – An Animal to Love or Hate?

The answer depends on which side of the border you reside.

I will speak on behalf of all Americans- We`ve all slipped in green poo.

Most of the infamous Canada geese who purportedly fly south for the winter end up in the state of Pennsylvania. My personal belief is that the mixture of corn fields and huge landing pads makes for a perfect goose Nirvana. Majestic when heading south in the V-formation, these super flyers morph once hitting the ground, becoming a different species all together. Something along the lines of a winged, attack dog. I`d rather run up on a flying monkey.

The company I worked for had hundreds of acres of pristine country farmland which  doubled as a much-loved rest stop for the geese. A blinking neon wing unseen to the human eye pointed out this geese oasis. As attractive as a road side Cracker Barrel, most never bothered completing their trip further south and settled in for good with a “This is far enough” mentality. The geese were so overjoyed with these new digs they started producing millions of goslings. They even over ran the rabbit population.

Which if I had my pick, I`d go with rabbits every time as they tend to run away as you walk toward your car versus gathering several buddies to run at you, beaks snapping and gargantuan wings flapping. Oh- That doesn`t sound scary to you? Those gigantic wings tend to get very buffed on the flight down. SO buff in fact, that if you happened to gently lay an arm in the armpit of a goose- it could break it.

Fear not, no need to get up close with a goose in order for it to break an arm. One poor colleague learned the hard way when one of the zombie geese jumped out from behind a parked car hopping and snarling. It scared him so bad he ran into a parked car and broke his arm. True Story. We`re still laughing at him. I mean with him, with him.

These monsters from the North are so ferocious that the Border Collies hired to chase them ran away yelping after a run in or two. The plant manager finally realized that netting over the courtyard would prevent the monthly ritual of the goose parade through the hallways and outside. (Followed closely by the janitorial staff cleaning up the poo as the geese honked and hissed their way through the building) Heaven forbid your office had a window overlooking a nest. Mama would constantly harass the occupant, pecking the window, threatening and pointing- 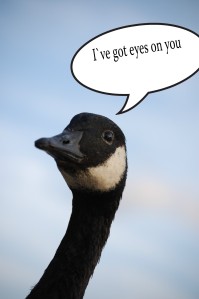 As with many species, the reason they continue to prosper in the state of Pa is that the babies are cute. Even a garbage throwing, Santa Clause booing Philly fan has a hard time running over a family of geese crossing the road.

However, I`ve found a Canada Goose even an American can love. 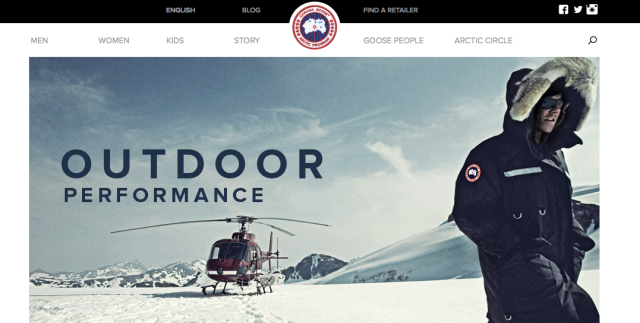 I used to laugh at the hood too until the wind froze my nostrils together.

The Canada Goose Parka. An American`s path toward loving the modern-day T Rex.

Living in a climate with temperatures to -70 ? ( C or F- doesn`t matter- it feels the same at that level) This is the coat for you.Technically speaking, it`s a parka. As a person who didn`t own a winter coat until I was 23, this was a nuance of language lost on me.  Without my beloved Canada Goose, I`d be forced underground for 6 months. Since we`ve got to eat, I would have to venture out to the grocery store at least once. Otherwise my alternatives were either a starving family or one living a pioneer life off frozen mushrooms scoured from the basement garage. Emerging from winter with scurvy, mange, and no teeth would undoubtedly color the Offspring`s perspective of Canada toward the negative.

I know, some of the Canadians reading this are calling me dramatic- or histrionic, because they know that one can in fact live an entire winter in Montreal underground. And Further, most Canadians think of the geese as logos since none have ever encountered one live. But those are different topics left for warmer times.

Until winter ends folks- mush on. 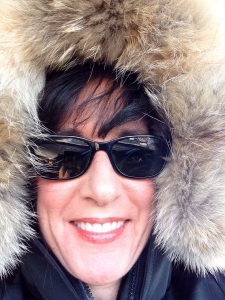 Aunt Suzie sent me this after I posted. Looks like the folks in Seattle may feel the same way… 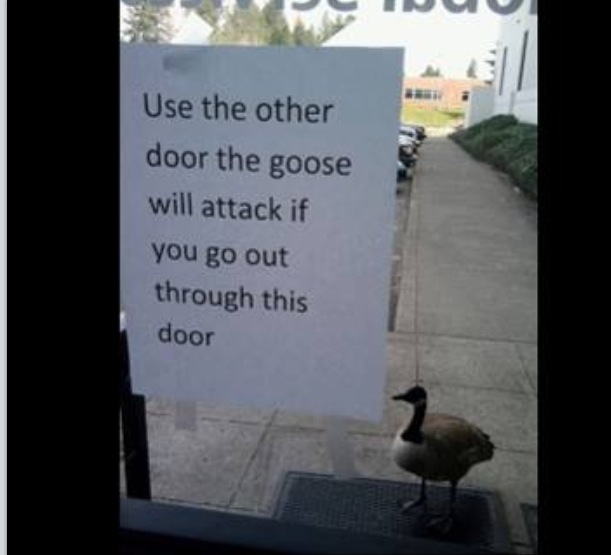 23 Responses to The Canada Goose – An Animal to Love or Hate?