A Forced March to the Terracotta Warriors- Xi` An China

I`m the only one who wanted to go. Two of the Clampitts flat refused. One actually had a good excuse being that he is living in Canada at the moment. The other got a lecture on culture, missed opportunities, and a stern warning not to blame me for not seeing the Terracotta Warriors in therapy later. The last Clampitt accused me of over packing the agenda, “Like you always do.”  The travel agent was skeptical- but he didn`t understand that a fast walker with a short attention span cuts an agenda in half.

Offspring #2 and I marched toward China. In her case, it was a forced march. As much as she enjoys her time at the pottery wheel, I couldn`t get her to rally any interest around these fellows. We connected and flew an additional two hours to Xi` An. Home of the Terracotta Warriors. 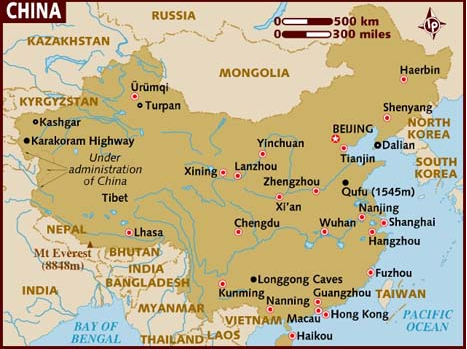 Raise your hand if you`d never heard of Xi`An (pronounced Shee Ann) before you saw this. This city we`d never heard of is as big as New York City. Population 8 million. It`s all under construction. (Beijing is 20 million, Hong Kong 7 million) 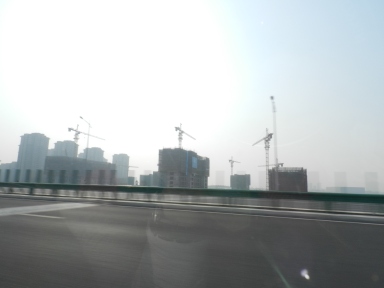 A drive by. I would like to be the owner of the crane company selling to China. This was taken about an hour outside the main city.

An hour from Xi` An is the excavation site of the Warriors. In the 1970`s some farmers were digging a well and happened to dig in to the very corner of 8,000 buried life-sized Terracotta Warriors.

Fearing they`d unearthed a Zombie apocalypse, they commenced to hashing and slashing. They soon realized these zombies were not the fighting sort and took a closer look.  Unfortunately for them, they had dug up something significant on their now former farm.

A mere 2,200 years ago, Emperor-Qin Shi Huang, the first Emperor of China and the first to unify it commissioned the creation of the warriors. They took 37 years to complete.

The museum was built over the excavation site. 1,000 of the soldiers were uncovered however, the rest remain buried. Each soldier is unique and painted to be lifelike, however, upon exposure to air the paint disintegrates. At this point the technology doesn`t exist to prevent the degradation of the paint so the remaining 7,000 will stay buried until they can be excavated safely. Since they are different, I guess you can`t say if you`ve seen one you`ve seen them all.

A picture from the Travel Book shows how they looked painted. 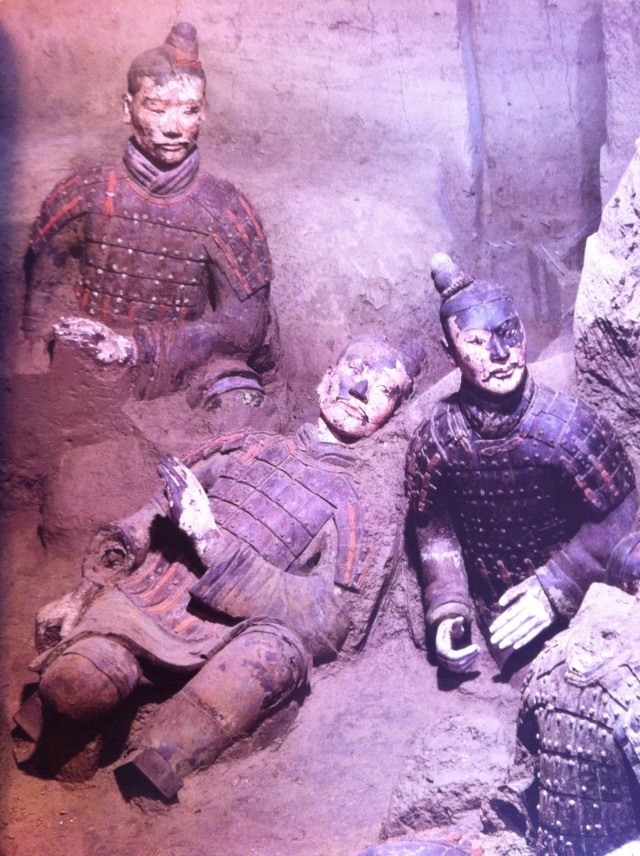 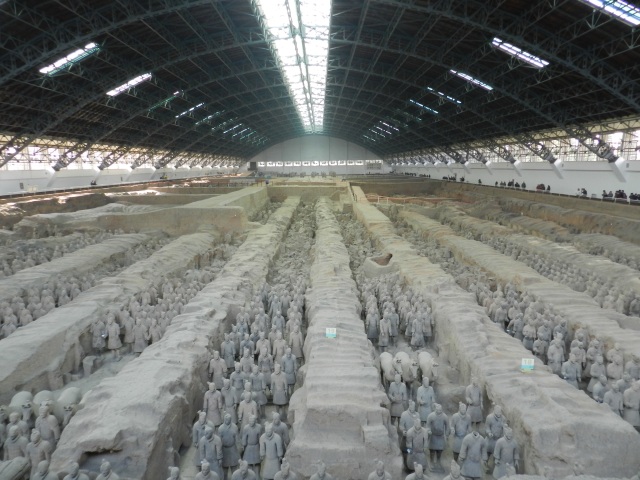 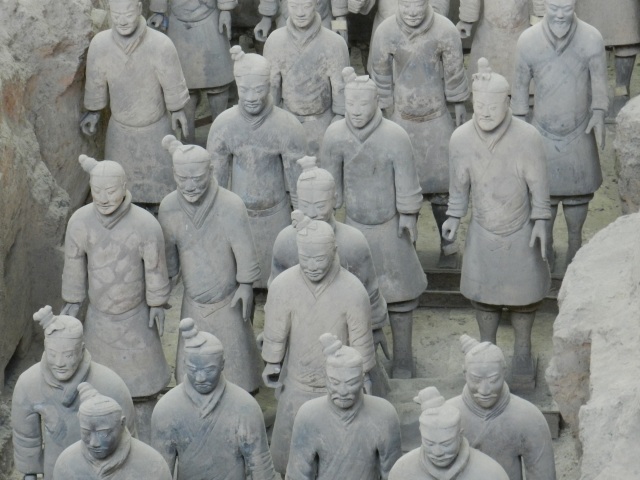 The Warriors are lined up in battle formation. Or so I was told. Infantry in the front. Further down the line, soldiers wear armor. That`s all I can recall of that conversation. Something else about horses being in a certain spot, and guardsman in another, and maybe certain people face different directions? Each also had weapons however, most were stolen during the last two millennia. Anyway, I`d prefer not to give away any Chinese military secrets as their military police are the scariest most bad ass dudes I`ve ever seen anywhere and I`m still afraid. Here. My lips are sealed.

I guess a flat top never really goes out of style.

Generals are stationed at the corners. (Our little secret)

The reins are long gone.

This is how they originally looked.

Two sets of bronze chariots and horses were unearthed. 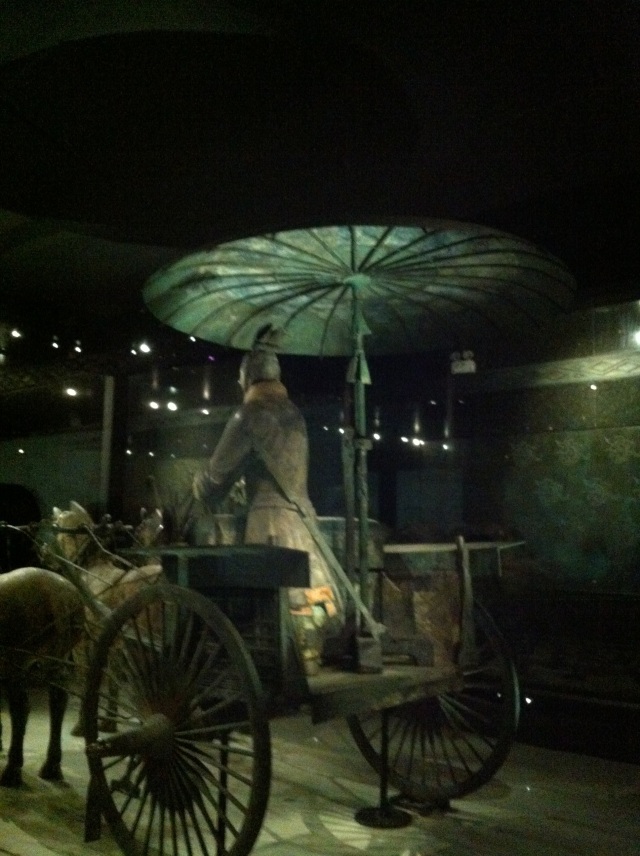 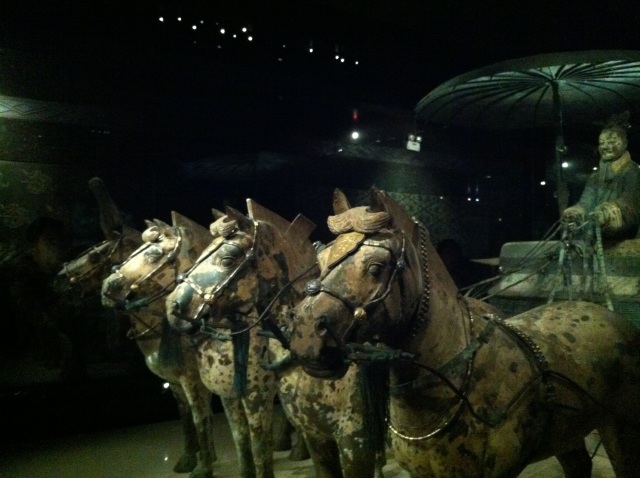 Following are pictures from the “Valiant Imperial Warrior 2200 Years Ago” Guide which highlights the level of detail on each warrior.

Hair Tips. I did this over the weekend and it came out really nice.

I sprung for the autographed copy. Naturally the farmer just happened to be on a “break” when I was in the gift shop. Probably a bunch of ladies in the back signing these.

After all these years, still happy to pose with tourists.