You Can`t Judge A Book By Its Cover- the Kimono

The kimono. Long thought by Western cultures to be an elegant robe, loosely wrapped and cinched with an elaborate belt allowing Japanese men and women to conduct the business of daily living devoid of the discomforts associated with ties and stockings. The kimono  transcends fads such as those producing leggings and minis on a woman too old to know better. I recently discovered this traditional dress worn for centuries is the example of a wolf in sheep`s clothing. Their robe like appearance belies the vice-like constriction which categorizes them as a little known instrument of torture. It is also possible that the kimono could be used as a diet aid since eating is impossible while wearing one. As is breathing.

Recently I attended a traditional New Years Luncheon hosted by a group of Japanese women.  Hidden among the sky scrapers of downtown Tokyo, Happo-en is an oasis of old Japan. The imposing wooden gates mark the entrance in Japanese. A large garden containing 500-year-old Bonsai trees, cascading waterfalls, and cherry blossoms surrounds the building. A picturesque tea house sits beside a lake. I expected powdered Geisha to parade around the perimeter to complete the picture. 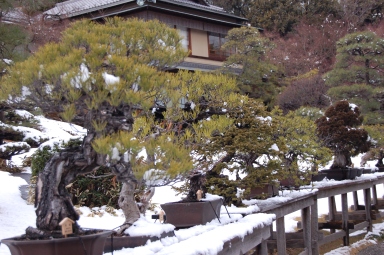 It seemed appropriate to wear a kimono.

As I investigated renting a kimono, I discovered two unfortunate facts. The first was that renting the kimono along with the other undergarments would cost between $600-1000. As if. And, it takes two to get one in to a kimono. So difficult, in fact, is the tying of this robe that training is required. Huh? So when one of my friends offered a kimono of her mother`s for me to wear I pounced and requested something indestructible and preferably not a family favorite. My own clothes leave a luncheon looking like I sat in a high chair. Wearing a bib over a kimono might appear disrespectful even if I did have its welfare in mind.

As is typical of the Japanese, my friend called having already thought through every detail.

“Ouisar-san, I have dropped off the kimono. Be there at 10:40 to get dressed. I have made all the arrangements. Bring some dish towels.”

I know not to ask. Just do it. There is a good reason for everything.

When I arrived at the Beauty Salon, several of my friends were already getting their hair done. Two tiny ladies ushered me in to a tatami matted room surrounded with mirrors. The kimono appeared to be a small portion of what I was to wear. I had no idea what was to come.

That`s when the man handling started. The two ladies dressing me may have been half my height but prior to being dressers they were sumo wrestlers.

First came the underwear. It is the only part that isn`t painful. 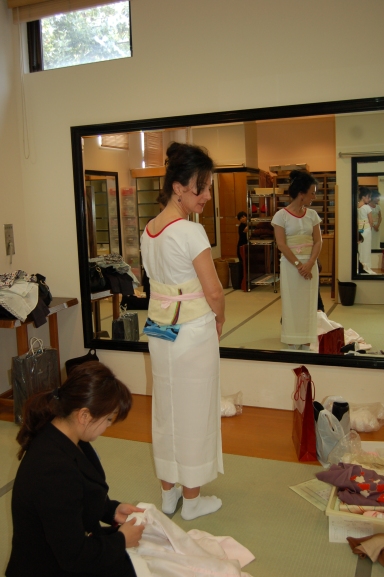 Here I am in my underwear- don`t pass it around the internet.

“Ouisar-san- are those dish towels strapped around your waist?”

Why yes. They are in fact dish towels wrapped around my waist. Their function is to flatten out the buttocks region. A woman in kimono should appear as a perfect cylinder and flat when viewed from the side. (I didn`t require any stuffing for the front as it was already perfectly flat) She also put cotton along my shoulders. Probably to absorb the impact from any falls I might take once fully dressed.

Next came an under kimono.

Sash number two above. She was wrapping them as tightly as she could. I soon lost track of all the sashes. I renamed them “Sashes of sufferance.” The Social Chairman documented the process. Not all sashes are included. 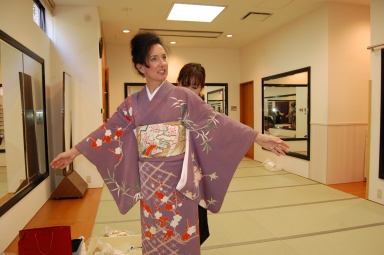 I struggled to describe “Too tight” in Japanese.

The evil ladies laughed and pulled harder thinking my ability to talk indicated a failing on their part to get my waist down by 15 inches.

At this point I blew out my stomach to gain room as they pulled. Knowing all the tricks, they smiled sweetly,waited for me to breathe, and pulled tighter. A mother boa constrictor would have been proud if her offspring could accomplish such constriction. They must know something about saddling horses. When they heard ribs cracking, one declared the obi drawn.

All my organs were now either above or below my obi. My lungs and stomach were both fighting for space in my throat. The more discomfort I felt, the happier these ladies became.

And I still had to squeeze in to the shoes.

Also designed to be irritating, the zori sandals and tabi socks are supposed to be three sizes too small. The heel of the foot must overhang the back of the sandal as a marker of proper fit. 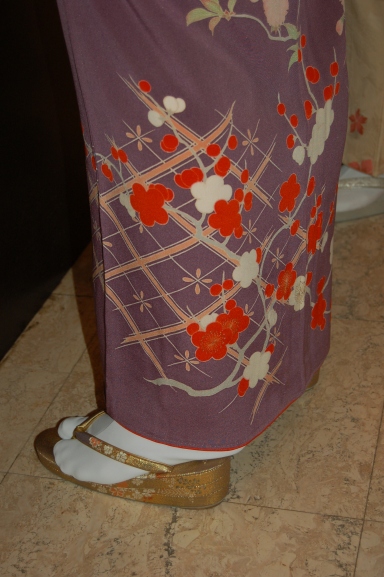 Did I mention I was roasting from the inside out? Between the layers, the stuffing, and the tightly bound clothing holding in body heat, I was concerned that my spontaneous combustion might ruin the party.

The kimono and obi I wore were antiques. Many of the kimonos are handed down through the generations. These are stunning works of art as opposed to my mother`s red,white and blue paper dress from the 70`s.

Hair is usually worn up to highlight the back of the neck. The poor woman in the salon attempted to hairspray the hair on my neck away; she didn`t know it only responds to wire clippers and dippity doo.

In Japan, if you want something a Japanese friend owns, simply compliment that person on it. Chances are good they`ll feel obligated to give it to you. The Social Chairman learned this lesson during the luncheon. She complimented the hostesses on the choice of sake. Soon the bottles were back out and being passed around. Then one of the uber sophisticated ladies hurried behind the bar to snatch a bottle. And put it in her purse.

My purse wasn`t quite large enough to carry a bottle of sake. However, my kimono was. It was then the ladies showed me the hidden pockets in the kimono. The sleeves are cavernous pockets, large enough for several bottles of sake, the flower arrangements, some desserts, and anything else I may have wanted to filch on my way out. 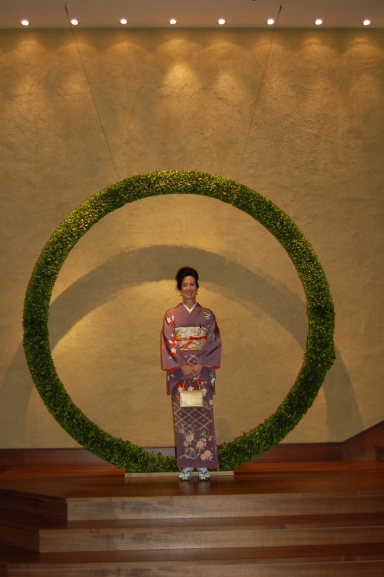 All dressed and ready to go

A kimono makes every woman beautiful. Elegant. Graceful. It`s no wonder they`ve been worn for centuries.

All photos taken by Heidi Sanford