What Not to Do While Visiting an Onsen

Several years ago I left my persona as a corporate climber and established myself as a trophy wife. That pesky full length mirror in our shower insists, however, that I am in fact a consolation prize won for participation only. I`m not alone among American women in my discomfort with the naked form. Generations after the Puritans settled America, their influence is still felt.  Or this is the group on which I`ll pin the blame as many other cultures, including the Japanese, don`t suffer from the same aversion to appearing unadorned. At least in a public bath.

The Japanese have been partaking of the daily bath ritual for centuries. It`s most likely the Japanese opposed the black ships sailed by Admiral Perry due to the stench of the sailors. While we were avoiding a good dousing with soap and water due to concern that cleanliness was the first step toward the plague, our Japanese counterparts had perfected the notion of a relaxing immersion both for body and soul. 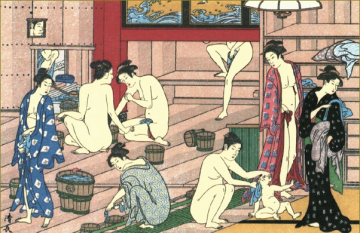 This was the baggage I carried with me on my first trip to an au naturale onsen.

The site was an outdoor onsen surrounded by gasp inspiring views of the snow-covered mountain landscape beyond. And koi. This would certainly be a welcome ending to a day spent filming Offspring #1 careening down, through and over mountains on a snowboard. Whatever the rabbit can do to the stump (go over, under, through, around, inside, on top) OS#1 can do to the mountain. I am not as facile with a stump and often find myself in a prone position with a nose full of snow. If I could get through my modest tendencies, the hot onsen could breathe movement back in to the joints and muscles in early onset rigamortis.

As is tradition, I put on the yukata for the trip down the elevator. I`d been in the elevator on numerous occasions with yukata wearing individuals, however, it felt to me like walking through the hotel in my pajamas.

I tried to recruit Offspring #2.

“No way. Sitting in a bath tub, naked, with your mom is weird.”

Then Offspring #1 pointed out a significant mistake on my part.

“Mom, the yukata is folded wrong. Left side over right side.” A significant face-saving piece of advice since right over left is reserved for funerals.

I prepared myself for the pajama march through the hotel. I was vaguely aware of the “process” for entering. Strip down, clothes in a basket, carry a small towel in to another area for showering, and finally, jump in the onsen. Getting caught studying the other bathers for guidance could be embarrassing.

I stripped down and put my clothes in the basket. 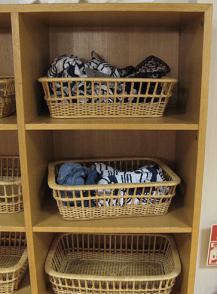 The other ladies paraded around the room shoulders back and chin faced forward. Like a prepubescent teenager, I slinked to the shower room. 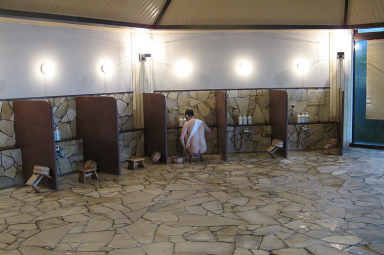 For illustration only. He was not in our onsen. tokyopog.blogspot.com

Here`s where I encountered several issues. First of all, unlike the other bathers, my colossal buckethead loomed large above the partitions. I would have to keep my eyes firmly pointed to the front. Not 100% sure of the proper use of the accoutrements, I took a peek at my neighbor. She was rinsing with the bucket and sitting on the stool while I was sitting on the bucket and missing the stool. Once the stool was located several concerns attacked me at once. How long can viruses and such live on a stool? Is this even more dangerous to one`s health than placing ones cheeks DIRECTLY on the toilet seat? Should I put the towel on the stool and then sit down? I suppose if onsen participation were a health hazard it would have been noticed during the last 10 centuries. I sat. I draped my towel over the partition.

It promptly fell in to my neighbors bath cubby. Unsure if poking my noggin over the top and asking her to toss it back was impolite, I decided to act like nothing had happened. A life skill I use to avoid embarrassment in many situations. Paper towels could be used for drying in a pinch. When I sprayed her with my shower nozzle, on the other hand, I felt an apology was in order. She wordlessly placed my towel on the partition.

After a thorough soap scouring, I was ready for the onsen.

The other women walked casually to the onsen as I streaked past more hunched over than the hunchback of Notre Dame.

I had read somewhere that it was best to fully immerse one`s self in the water versus wading in an inch or two at a time. The author claimed the bather would feel discomfort at the heat for about a minute before becoming accustomed to the hot temperature. I took this approach. The other bathers politely ignored my “hot hot hot” breaking their meditative moods. It`s true that after about a minute the heat is no longer an issue, for the nerve endings in the skin are completely burnt through and no longer function in a sensory capacity. The process enlightened me to the plight of the lobster headed to the pot, the hissing upon hitting the boiling water, the desperate pinchers grasping for an exit, and finally the fiery red color indicating doneness. I too hissed, grasped for an exit, and finally settled in to the bath a violent shade of red previously only seen on my fingernails.

It was then I realized the Japanese ladies` porcelain skin was still porcelain. While I needed a burn unit, they perched languidly on the side wall and gazed nonchalantly at the view.

The other women sat in two and half feet of water with the white towels on top of their heads. For some unknown reason, towels on the side are a no no which leaves the head as the only resting spot. 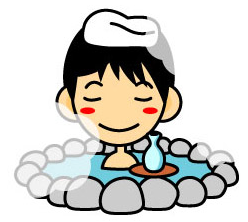 I would have liked some sake....

I realized too late that my towel was a bath towel whereas these ladies had hand sized towels. They all pretended not to notice as I wrapped my towel turban style however, curiosity at the foreigner unaware of towel size proved irresistible and on que, all snuck a peek at once.

Nervous laughter from me followed by an involuntary response by the body of turning an even deeper shade of red -which I thought impossible.

I turned to the side and saw an American woman I know. Under normal circumstances, a friendly hello followed by the pleasantries would have been expected. But naked?

“Well HEY- how are you? I notice your boobs are a victim of gravity too! Sweet!” or

“Hey, there`s a mole on your hind side you may not know about. You might want to have that checked.”

I sat for a minute hoping she hadn`t seen me through the steam. Apparently she was also tongue-tied and slowly moved toward the opposite end. Will the image of her in my memory always be of her naked? Will she always carry a naked image of me? Not a pleasant thought.

I made my way to the edge to watch the koi. Then I looked at the view. Then I got bored. It had been 5 minutes.

Maybe I`m not the bathing type. I swam through the 2 feet of water to the exit for the second most painful part of the experience. Walking from the onsen in snow weather to the door. Although watching the steam rising off one`s body is very entertaining to watch.

All total, I spent about 40 minutes getting ready for a 5 minute dip. I`m certainly the minority, however, as onsens are ubiquitous in Japan and everyone, including the foreigners, loves to visit. 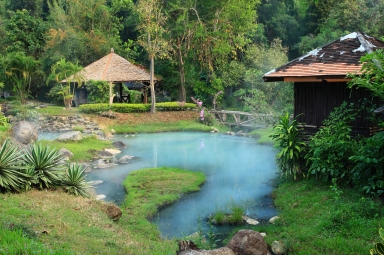 And of course the snow monkeys. 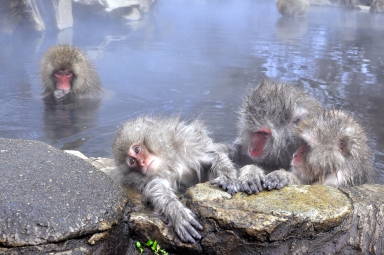 30 Responses to What Not to Do While Visiting an Onsen