The Making of a Tree Hugger

Thanks to a liberal education and a couple of teachers militant about saving the rain forest, Offspring #2 embraced the concept of the “Eco Friendly” vacation with arms, legs and soul. I feebly cooperated in a futile attempt at bonding with a teenager. According to the source for all useful information, Wikipedia, “Environmentally friendly (also eco–friendly, nature friendly, and green) are terms used to refer to goods and services, laws, guidelines and policies claimed to inflict minimal or no harm on the environment.” Somewhere during this vacation to Borneo, Offspring #2 fully metamorphosed in to an ozone saving, eco- friendly, tree hugging member of the green planet while I quaked at the danger such close contact with our rain forest friends presented. The threat of dying quite missing from the eco-friendly definition.

Our electric motored tour boat glided through the water minus the accompanying smell of gas allowing Offspring #2 and I, along with a dozen of our new best friends, to blend seamlessly in to the landscape. So unassuming were we in our scentless boat, animals got dangerously close, to the delight of many not aware of the myriad of disasters potentially accompanying close contact with wild animals.

The guide heard the shuffling of feet moving through the forest and we all strained our eyes to see what might emerge.

“Pygmy Elephant!,” someone shouted. The cameras started snapping. I looked in the same direction as the others hunting for this tiny specimen. Not until it lumbered in to the water for a bath did I see it. Unperturbed by the noisy exclamations of delight, primarily coming from OS#2, the elephant sprayed itself with water and disappeared under the water.

“It`s blowing bubbles under the water.” I said to no one in particular. Soon giant balls of poop popped to the surface and the elephant emerged apparently relieved. Now 10 feet from the boat, it went under again. I watched for tell-tale bubbles moving toward the boat indicating an elephant intent on capsizing our craft.

What if this diminutive pygmy elephant had decided the audience annoying thereby warranting a shower of poopy river water? Additionally there were the massive tusks rivaling that of that great behemoth the Wooly Mammoth. What if the OS2 and I were both gored and carried off impaled on those tusks? Her on one side, me on the other?

OS#2 leaned in for a close encounter with the bather. I snatched up a large chunk of her shirt just in case she fell in. Next time I`d prefer like a plate-glass window between us and the wildlife.

Eventually the elephant tired of the game or got clean and retreated to the forest leaving us to search for the next forest resident. Once again came the cry from our guide,” Poisonous Yellow Cat Snake in the tree!” All eyes strained for the snake while I tried not to burst in to tears. To my horror, OS#2 tried to stand for a closer look as the guide parked the boat directly underneath the sleeping reptile.

“MOM- GET OUT THE CAMERA!!” Did I bring a camera? The fear that had frozen me had overtaken all rational thought. The tour guide searched for a paper bag in which I could hyperventilate.

If the snake fell in to the boat I`d become the second person in history to allegedly walk on water.

If the snakes weren`t enough to keep one out of the trees, monitor lizards might have been a good second reason. All appeared to be sleeping- invisible- on the branch. Watching him taking leisurely yet assessing looks at the folks below brought on visions of his cousin, the Komodo Dragon, hunting us down.

Although not a fan of lizard types, OS#2 was elated at the numerous examples found dozing in the trees.

Someone in the back of the forest let out the Proboscis Monkeys for our entertainment. Even they came with a warning.

“DO NOT make direct eye contact with the monkeys. Ever.”

Now added to my bank of useless trivia was the news of monkeys wiggling their ears- prior to attacking. Innocent bystanders, or boaters as was the case.

The Proboscis Monkey- one dominant male lives the life of a sultan with a harem of females. On becoming the alpha male, his nose mysteriously grows to gargantuan proportions. The ladies like that.

Ouisar-san-  ” Diarrhea rash from too many spicy leaves?” 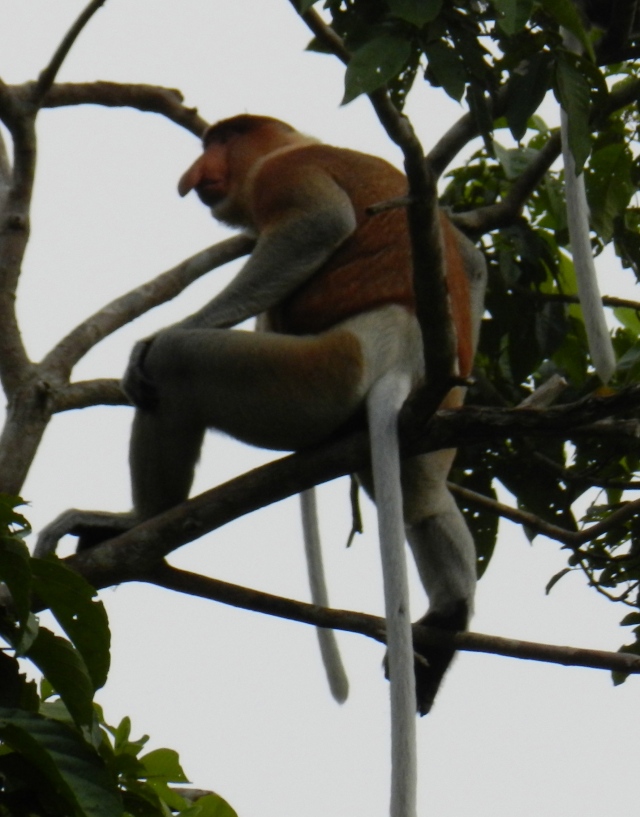 And then we found one of the reasons rain forest animals stick to the trees. 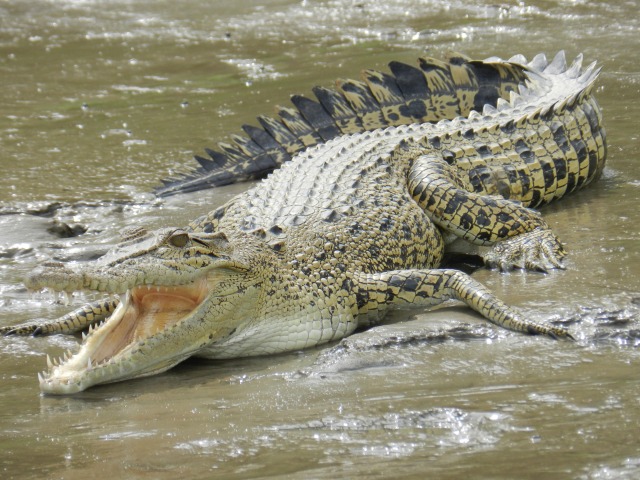 If that picture didn`t discourage the boat crew from disembarking, the leeches did. Once out of the boat, all were required to wear rubber boots with a covering of plastic socks  outside the boots to protect our precious blood supply.  7 blood sucking types call Borneo home. Luckily I don`t have pictures.

I do have pictures of the largest flower in the world. Also the most deadly. Up to 3 feet in diameter, the Rafflesia, smells like rotting meat, blooms for 3 days a year, and eats whatever happens to come its way. Including rats. It holds a well deserved nickname- the “Corpse Flower.” 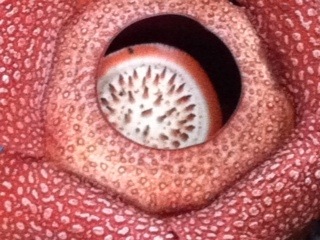 OS#2 was so disappointed that a mere fly corpse was inside.

OS#2 was now reeling off a list of the awesome (dangerous) things she had seen. I just wanted to go home.

AHH- the oasis of our Eco-friendly lodge….

After a day of gawking lovingly at animals that could kill or maim us, I was as ready for a shower as everyone else was for me to take one. Gas lamps lit the outside corridors to each room, cisterns of rain water sat outside waiting to flush the toilets. No bottled water. To this I decided saving the planet is an admirable goal, but not at the expense of air conditioning and a hair dryer. I prefer the fully loaded hotels.

At dinner, the general manager shared his new find. He had caught a baby reticulated python on the main walkway in to the dining area. The python`s brother was found dead after someone “accidentally” stepped on his head. 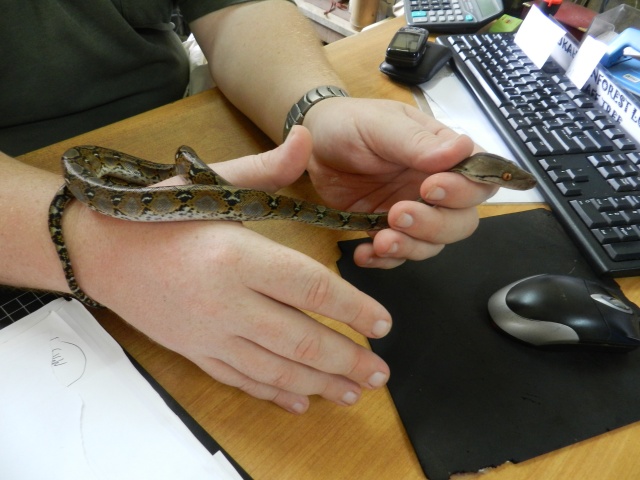 OS#2 was practically jumping up and down as the snake was pulled out of a canvas bag.

“His skin is so shiny and the design intricate- wouldn`t he make a great handbag?” This brought a ubrupt end to my conversation with the tree huggers. They don`t find humor in jokes about animal pelts, the ozone layer, or eating dolphins. OS#2 was the only one willing to talk to me for the remainder of the visit.

The baby snake had the last laugh as sleep eluded me that night while I envisioned super-sized mommy escaping her hiding place under the deck to come up through the toilet and bite my big butt during a middle of the night trip to the bathroom.

Thank God the next day would be a tamer day searching for orangutans.

In the meantime, how can you tell the difference between a monkey and an ape?

48 Responses to The Making of a Tree Hugger