We Interrupt Our Usual Programming to Provide This Emergency Message- Typhoon

An emergency message from the US Embassy is always an unwelcome addition to one`s inbox. 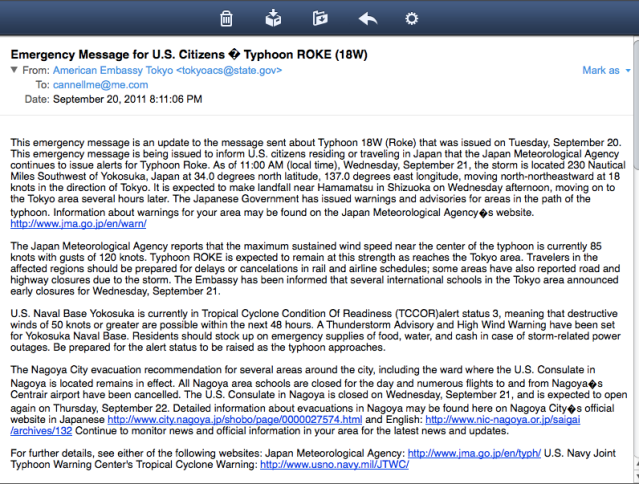 Next came an email from school announcing its closure and the imminent arrival of the elated Offspring and their celebrating compadres. This was more distressing than the typhoon as I had a full day planned and nothing in the pantry to keep the hostiles fed for the next 48 hours.

Andretti-san and I scurried around Tokyo getting provisions for the typhoon sit-in. The rain waited for me to run in the grocery store and come out to the street before it launched the assault with an initial big, wet deluge. Through the gloom I could see Andretti-san laughing as he locked the car doors barring my entrance.

Within minutes the street was flooding.

The trains stopped running about 6:00.

As usual, anything dangerous grabs the attention of Offspring #1.

Ouisar   “No.” Incredulous at this inane request, I was proud that “Where did you leave your brain, son?” did not pop out instead.

Offspring #1  “Nothing`s going to happen.” Disgusted with my superior ability to suck the fun out of the thrill seeking afternoon he had envisioned. Visions of being blown across a field while held three feet off the ground by strong sustained winds were dancing in his head. Yet another adrenaline induced high to add to his growing repertoire.

Ouisar   “Branches come off trees- then fall on you- then kill you dead.”A visual would have helped make my point.

Offspring #1   ” Like that`s going to happen.” In his head, “Mom, you ignorant slut.” He parked on the balcony 3 feet from the trees now spinning in the wind.

I knew it was just a matter of time before the proof would prevail thus preventing me from releasing those annoying words, “I told you so.”

The Yoyogi Park walkway was a green carpet of fallen leaves.

A large tree had fallen across the pathway to the park, its neighbor uprooted and leaning precariously toward the ground. 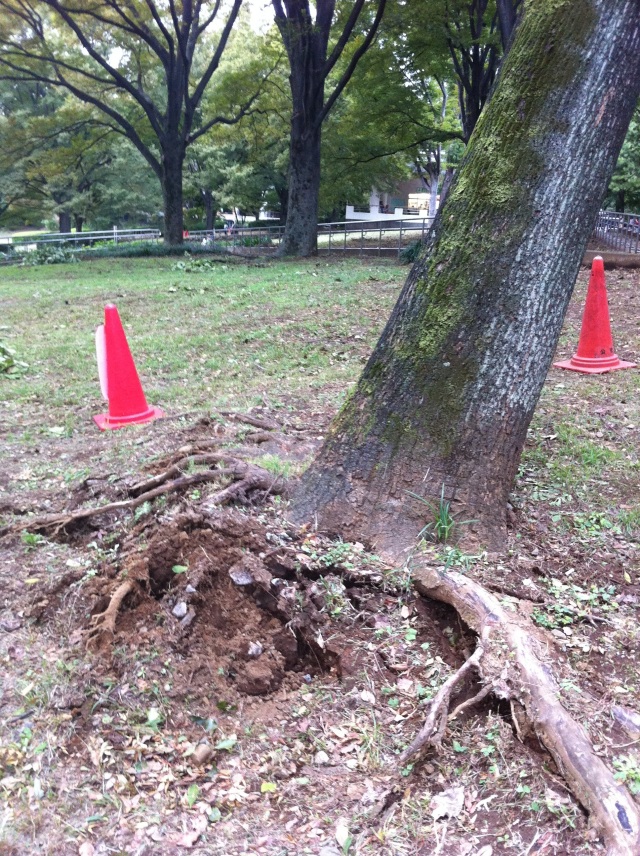 I prefer for the pictures to say, ” Look what could have happened while you were being blown hither and yon….” 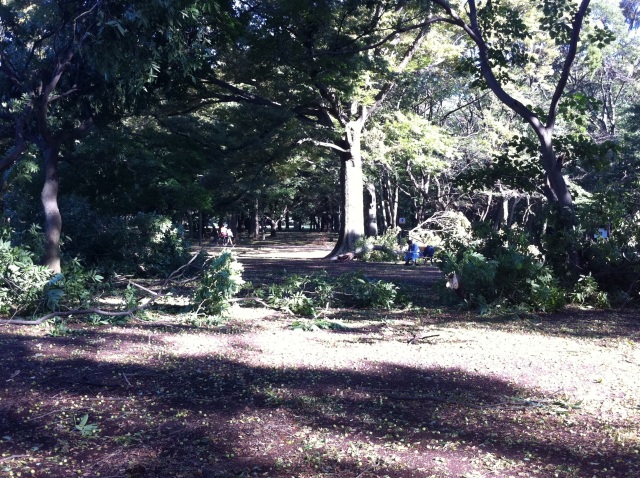 Um hmmmm… Did I say that? 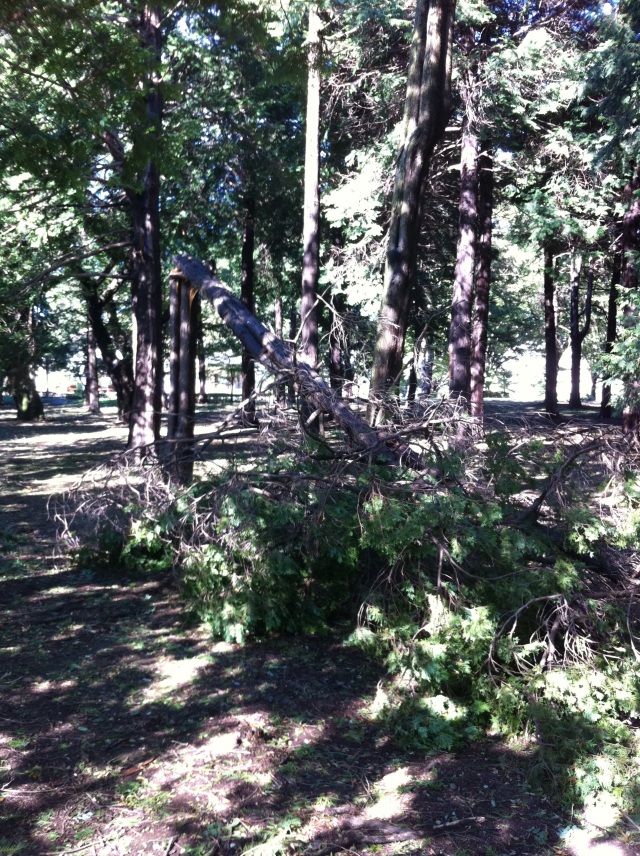 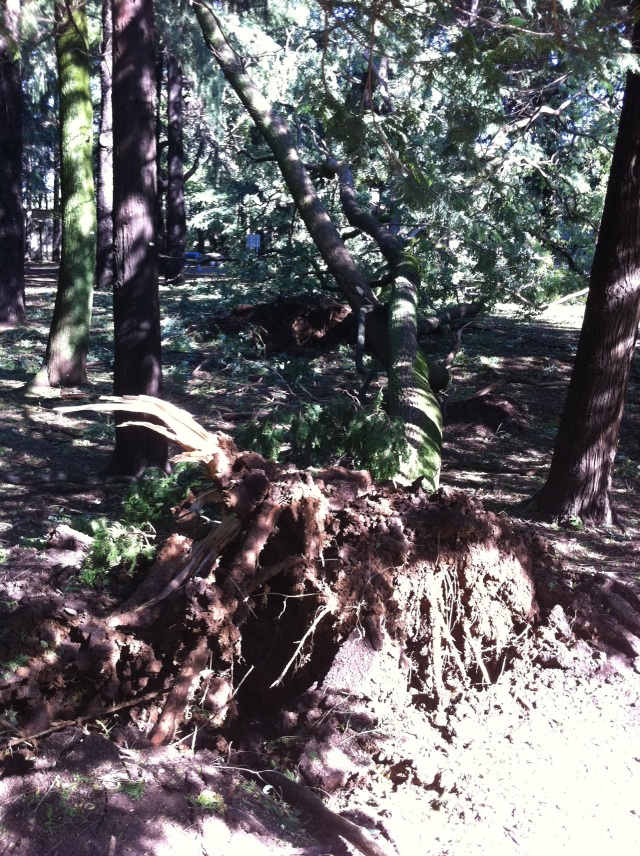 I never pass on “before and after” shots in the National Inquirer. These aren`t as entertaining as celebrities transforming themselves in to cartoon characters but certainly the trees also felt like their beauty lost when the typhoon relieved them of the pink blossoms. 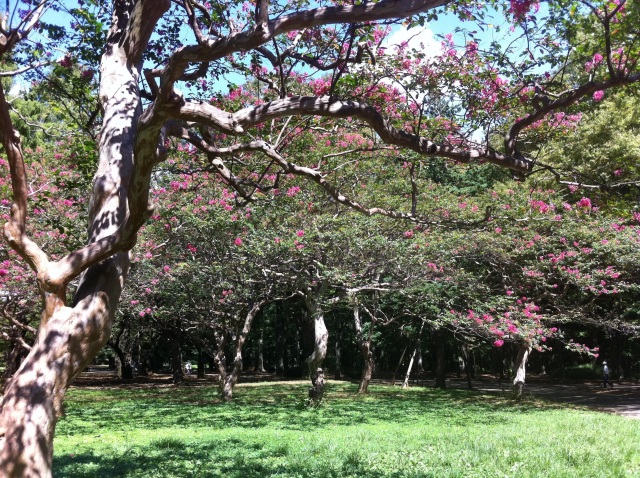 Just like you, I have often wondered the best way to scour a park of fallen leaves. A witch`s broom:

Somewhere during the chaos, an earthquake occurred. I didn`t notice the increased shaking in the building nor did I hear the tell-tale squeaking of the ceiling preceding a quake since the typhoon was providing all the sound effects necessary to help one feel the power of mother nature.

Never did I think I`d experience an earthquake and typhoon at the same time. Andretti-san claims the wind caused the Richter scale to register a magnitude 2. In an earthquake that small it`s very difficult to tell if it is an earthquake or just Spouse walking down the hallway.

The Offspring have been complaining that the number of typhoon days are much fewer than snow days causing them to attend more school than before we arrived in Japan. To this my only response is, “I`m hoping the next country in which we live has a shortened summer.”

A scarier thought than a typhoon seen through the eyes of a teenager.