Hoist the Sails- Kentucky`s Not Just for Horse Lovers

What do two tired middle-aged sisters do when faced with the dilemma of entertaining 4 kids each capable of rendering an adult speechless in under 60 seconds and too big for confinement within a dog crate? Hoist the sales and throw them all, protesting and hurling insults at being separated from electronics, on an 80 foot houseboat with a hot tub, slide, diving board and 4 bedrooms.

The Nose and I didn`t give much thought to the consequences of this idea conceived over a glass of wine while the hooligans tore the house up as background music. Escape from the yelling, fighting, dogs barking and door bell ringing accelerated the execution and curtailed the planning. Feeding the banshees, immersing ourselves in wine and threatening the plank to those who dared mutiny was the all-encompassing strategy for bliss. “Takes action slowly” is not the usual criticism aimed in our direction.

A floating playground for kids and mothers, all of whom were now completely wild after 2 months off from school, the Nose and I l envisioned an evening spent on the fly bridge engaged in something like this:

Muffin tops safely concealed below the water line, kids nowhere in sight, dudes left safely at home as they bring the kid count up to six, and add a cocktail. Our plan.

Which unraveled as soon as we left the dock.

A 10-year-old boy instructed us on the boat`s operation. I adopted the name “Maverick” on my practice radio call to the dock while the elementary schooler navigated us off the dock. Another boat picked him up and we were alone. It all sounded so simple when he explained it.

The Nose, having come by her name due to her ability to navigate, was the obvious choice as captain. With a hearty “aye-aye Cap`n” I proceeded to the fly bridge to fire up the hot tub. Operating it would have been so much easier if the Nose was driving in a straight line. Not really understanding the instruction of,” Make small corrections while driving,” the Nose immediately drove the boat in a circle causing half the water to slosh out of the hot tub. Another hard turn left emptied it. Clearly she needed my help.

As any responsible older sister would, I poured a glass of wine, pulled up a chair, and instructed her on proper driving techniques.

4 junior volunteers shot up their hands.

“Why yes I would,” handing over the wine to her.

I demonstrated my captain`s skills by driving in two perfect circles at full throttle.

“Aunt Ouisar- you SUCK at driving!” the deck hands were vying for my position.

“Maverick re-assigning command to Captain.” I handed her back to the Nose and threw out the wine.

Someone had to communicate -sober- with the 5 other house boats now blocked from marina entry by our circuitous attempt to get out. After 30 minutes of circling, the Nose finally got the boat pointed toward the main body of the lake. Driving in a straight line was a technique neither of us mastered. Like a side winder rattle snake, we moved in a semi-forward motion down Lake Cumberland.

Our goal was to drive 30 minutes toward the dam and find a place to dock inside a cove for the night. The hooligans mistakenly thought they had input rights. One harassed the Nose to drive, one harangued me to re-fill the hot tub, one begged to pull over NOW, and the fourth told us how to properly drive the boat. As wine was no longer a viable option, I considered ear plugs while watching the Nose snake her way down the lake surrounded by the four spawn who now resembled a squawking band of obnoxious crows fighting over a worm.

Unfortunately our crisscross pattern down the lake meant getting to our destination half as quickly. We picked the first available spot. It looked like a fine place to throw the junior mates overboard.

The only task separating us from the hot tub was tying up the boat. The Nose dove in with a rope and the objective to tie it to a tree. She tied the first of four ropes while I attempted to keep the boat in one spot during the process. Successful after 10-15 failed attempts, she moved to the second rope on the opposite side of the boat. A successful tie down occurred at the expense of the first rope- which promptly came untied. After the Nose swam in circles around the boat for two hours we realized the cove was too wide to tie up the boat. But the Nose had gotten a fantastic work out in the process.

The cove was too narrow to turn the boat around so I backed out of the cove and into the main body of the lake. It was then I discovered my superior skill at piloting a large boat in reverse. We proceeded to the next cove- in reverse. Positioning a hooligan on each corner of the boat to give directions ensured they were all still on the boat.

The rental process didn`t involve many qualifications- any in fact- therefore the Nose and I reasoned these houseboats must be of hearty design. I turned the boat around and beached her on the bank of the next cove. It made the tying up process easier.

“Man Overboard” announced the Captain`s decision to open the slide. All kids were now happily scaring the fish at which point I begged the Nose to drive off and leave them. Not only would she not abandon the minions, she slid in.

As is usual for kids, once the slide wore the butts out of their bathing suits they were ready for a new form of entertainment.

” I`ll give you something to do- Swab the decks- I only want to see `Elbows and Assholes`.”  I`d been waiting all day to throw around my Navy slang. They took to the news with shouting, stomping feet, and waving burning stakes eventually turning to the Nose who promptly came up with a preferable alternative.

Apparently the Nose found a geode during her tying excursions on the bank. The kids hopped off the boat like rats on a burning ship in order to be the first one at finding the next specimen. Soon the stern was resting at the water line under the weight of the geodes and I was getting concerned the bottle of wine would never make the trip to the hot tub. 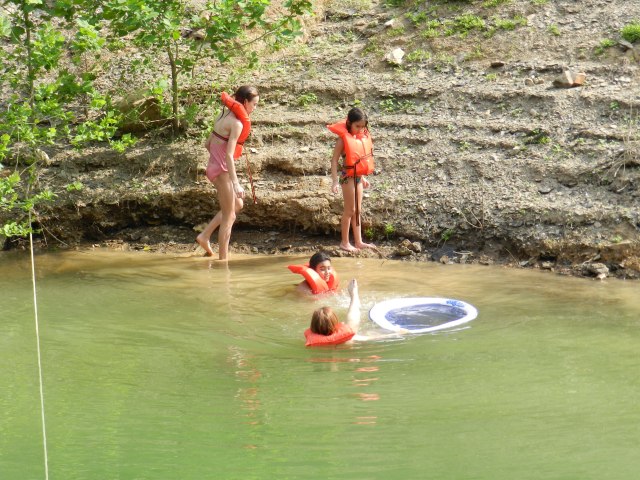 The round float made a perfect rock basket

The kids were soon more focused on getting the “best rock” than Indiana Jones on a quest. To get them back on the boat, we employed a few of  “Mothers` Techniques for Submission.” Understanding “Monkey See, Monkey Do” and “Make it Look Interesting,” the Nose and I entering the hot tub brought them all clamoring over the side of the boat. The hooligans jumped in filling our pool of serenity with water guns, toys, and floats, all the while spilling neon colored drinks.

The hooligans were getting out of hand on a geode induced high. The Nose fired up the grill thinking food would calm the savage beasts. The elbows thrown and Neandertal  manners employed were enough to make any sailor proud as the kids wrestled for every piece of meat that came off the grill. The Captain only suffered one bite which in a twist of fate failed to break skin. Dinner with a table of drunken Vikings would have been more pleasant.

“Time for Bed!” I yelled from the head of the table.

Lord have Mercy- I was afraid I`d entered a prolonged nightmare. If I go to Hell it will be filled with eating stuffed bell peppers and reliving this day.

God eventually tired of his joke and allowed more warm water from the hot tub to drain the energy out of the motley crew.

We eventually tucked them in to bunks too exhausted to be scared or beg for another glass of water. Our final moments of that day were spent enjoying the sunset and contemplating new ways of wearing down the hooligans we had released upon the world.

The next day as we made our way home, each kid got to drive. An observer from the bank would have been hard pressed to tell who was manning the helm- an adult or kid. We circled and zig zagged back to the marina.

Where everyone gave us lots of room.