When Comfort Food is a Must

Who knew Offspring #1 and I would be snowboarding on April 10th?A particularly bothersome trip for several reasons. First, the terrain park closing meant he must improvise by creating his own, thereby turning the rest of the mountain in to his own version of home-made, disastrous fun, with me following closely behind matching his Indy car speed, video camera rolling, short of breath and having heart palpitations. Watching him take flight over the side of a precipitous drop momentarily stopped my convulsing, probably bloodless heart until I was instantaneously revived at the sight of a rising helmet on the other side.

All in the rain.

A balmy 58 degrees turning the snow to a slurry sludge.

Only the fully committed testing their limits at Happo One, Nagano, Japan in these doleful conditions.

A studied and consummate liar, the biological make up of all teenagers, he’d tell me anything for a Facebook photo-op.

Ouiser   “Isn’t that the start of the Olympic Men’s Downhill? I’m not sure I can get down from there- aren’t there at least two mogul courses between there and the next run?”

OF#1 (Pinocchio)   “No- anyway- if there are moguls- just go down the side where it’s flat,” Why didn’t I notice the rapid lengthening of his nose?

His lie burned in my memory as my legs burned the 200 yards – 2 football fields- down the mogul course, my chin black and blue from close contact with my knees. I attempted to traverse a course on which I should have been immediately ejected, careening completely out of control down the “slope.” I had to find the flat part which was clearly not visible through the bouncing. Offspring #1 had the audacity to lie at the bottom laughing when I crossed the course attempting to escape the moguls, and through a miscalculation and a snowboarding first, across a large patch of newly emerged mud and thistles. The board baulked at the difference in consistency between snow and mud, abruptly stopped, whilst I continued on. Now thoroughly encased in mud, my helmet and bindings harboring numerous clumps of 24 inch grass, I snowboarded the remainder of the day impersonating a Special Ops Commander more suited to hiding in the bush.

The torturous journey allowed for at least one benefit. Documentation that I’ve snowboarded in the path of Olympians although that might not be the appropriate term. However, I did make it to this spot with a snowboard strapped to my boots. 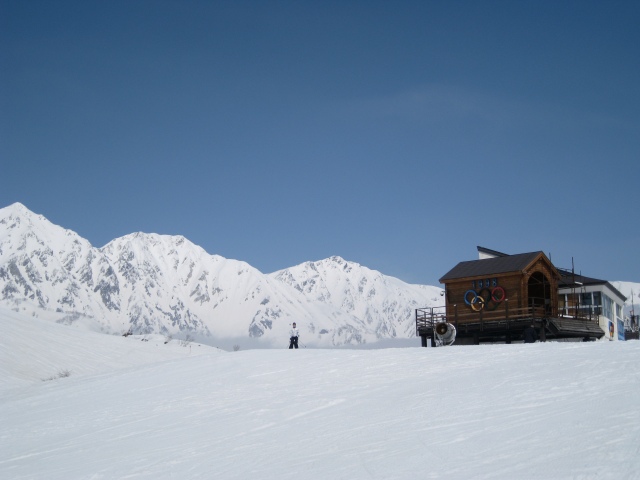 On through the next course toward lunch.

Following the bobbing point ahead that was my son, I learned that when traveling at Mach 3, in the rain, one’s eyes tear and vision tends to blur. Everything became suddenly clear when the point I thought was my son materialized as a restaurant in to which I crashed with a clunk, my last impression being the many “O” shaped mouths facing my direction as I gently slid down the glass in a mass of wet gloves and drool. Offspring #1, unaware that most parents don’t enlist the aid of ski school children and buildings for deceleration, grabbed me by the boots and in a show of blossoming chivalry, pulled me feet first in to the restaurant.

My first thought was, ” The only consolation for this level of humiliation is a cigarette, a drink heavily laden with alcohol, and maybe some other substances of which I haven’t partaken since before the onset of age spots.”

All of those things OF#1 would might happily fetch for me. And then use himself.

Comfort Food would be a good alternative with an Offspring present.

I clutched his arm, stared intently in to his eyes, and forced yen in to his hand, “Kare to mizu o onegaishimasu.”

“Mom- I can speak English. I know what you want.”

Who knew there was such a thing?

And the national comfort food of Japan.

Not the curry taste of an Indian style curry, with varying levels of heat, and a rich flavor. This dish can be served several ways, as above, over pork katsu (a fried pork cutlet), with stew meat, vegetables only, cheese, or ground meat.

Easy to make- saute’ onions with vegetable oil in a skillet with stew meat until meat is browned on all sides, set aside. In a large pot, cover cut potatoes, carrots, and turnips with vegetable broth and bring to boil. Add meat and onion mixture and the mix below- bought in any Asian grocery store:

The curry is packaged in blocks which look like fat hunks of chocolate. Crumble blocks in stew to taste. Cook on low until meat is tender- at least one hour.

After a lunch of comfort food Japanese style I might make it through-until nap time.

26 Responses to When Comfort Food is a Must