The Offspring headed off for school an hour earlier with a drag in their step and cacophony of complaints on their lips as I merrily pushed them out the door to catch the bus for the first day back. Having not seen another soul in the building other than the receptionist, whether they would have company on the bus remained a mystery however, much to their consternation, I consoled them with the news that as in life, they would always have each other.

I, on the other hand, had given myself a week off from Japanese schooling with valid and compelling reasons such as, “I need to find bottled water” even though we’re guzzling it out of the tap, “I must volunteer to help those in need” which usually involves the time-consuming task of entering my credit card number on-line, and “The Tokyo American Club has asked ME personally for donated items- I can’t let them down,” which involves one trip to Costco.

I immediately called the intrepid Andretti-san, interrupting him from his gossip session with the other drivers.

“Let’s go- we’ve got important business to take care of.” I could hear the tires screeching before I hung up the phone.

Our first stop was the local Catholic church for rice ball making- Onigiri- on behalf of the people hardest hit in Northeast Japan. Truthfully, and some of you who have been reading a while know this, I’m not the volunteering sort, I prefer to write a check which is why I really enjoyed working. I could honestly say when asked to volunteer,”Sorry, I gave at the office.” No looking at forlorn, downtrodden faces, no listening to sad stories, just going about my life oblivious to the plights of others. The way I like it. Unfortunately for me, Japan – and you are not going to believe this- does not have a check writing system. Cash, credit, or Paypal. I’ve had to alter my preferred method of giving. I decided that onigiri making might be a good alternative- no interactions with the actual people involved. Down I went toward the basement of onigiri making for positioning in to future sainthood and what do I find? 45 Filipino evacuees– many of them children- housed in the basement! By the time I was done with the rice balls I was in the fetal position, my rice balls salty from my boo hooing. Not only that, I had a mesmerized audience of 5 children WATCHING me fill bags with rice balls. What was God doing? Punishing me for do gooding? I could hear his booming voice, echoing through the basement for all to hear, “Slap on the wrist and 10 Hail Mary’s for imagining yourself with a Mona Lisa smile, a rose clasped in your hands and flowing, saintly robes. No canonization for you. On to your next challenge.” Poor Andretti-san didn’t know what to do when I came out screaming with my eyes swollen shut. 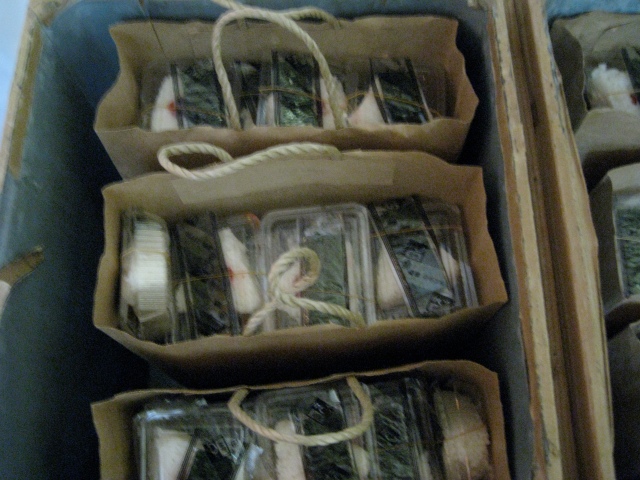 “Costco” I managed to spit out. We needed supplies for our next stops. Tsk, tsk Costco. Toothbrushes, toothpaste, canned goods, diapers, but not one bottle of water. (Which by the way, a case is selling for $40. We just buy them out of the machine for the same old price. We’re just street smart that way.)Delivery volunteerism I found to be more to my liking. Buy all the goods at Costco, sit in the car while Andretti-san drives all over Tokyo hunting for the secret locations in which the relief organizations hide themselves, then I deliver the goods and receive all the credit.

Our next stop was Hands On Tokyo- items needed: toothbrushes, toothpaste and hand towels. Apparently without these items, diseases spread more readily. Andretti-san and I delivered enough for a small town. I never saw the woman’s face who took the items, but I would recognize the top of her head for as she was busy bowing in thanks, I not knowing what else to do, packed the items myself and left. Andretti-san would have been extremely helpful in this situation, however he, as is his usual habit, had parked the car  just inside the foyer and needed to keep an eye out for the popo in case he needed to make a quick exit. If I came out not to find him in the spot where I left him, I knew eventually he’d come speeding by with the window open for me to jump through as he briefly slowed down.

Our last stop was the Tokyo American Club where we dropped can upon can of tuna. No doubt the creepiest stop of all. The usually haunt for all ExPats was truly spooky. The ex packed club looked as if we had entered during the wee hours of the morning, not a patron in site, and a skeleton crew. All the lights were off, the elevators not working in order to save power, the restaurants all empty save one specterly server floating in the background. In to the dungeon I descended, looking for the drop off location. I found three pale ladies ecstatic to see me when I arrived, either to see another human being or because supplies had arrived- or both. One handed me two lists of needed supplies. They could’ve saved paper by condensing to one list which said,

All this dropping off stuff had worn me out. Kids texted that the bus was on the way home. School stats were in. First day back and 54% of the Middle School kids returned, 74% of the High schoolers, and 43% of the Lower School. However, the Offspring disputed these facts citing alternative numbers: 3/12 students in homeroom- Offspring #2. Offspring #1 reported that watching movies was his preferred method of learning. Both thought going to school in the dark, with the heat off, would certainly ease pressure off the power grid. Further, both thought starting and ending school earlier by an hour were appropriate measures for decreasing power consumption during peak utilization hours. The jury was out on the virtual learning their out of country contemporaries were currently experiencing, however, given the caliber of the teaching staff, I’m sure it will be benefit everyone in the future. All things considered, I’d rather expose my family to radiation than home school. I think the Offspring would agree.

The Offspring like the new schedule but dislike the individualized attention a teacher can now devote to five students. I’m learning to spend money on others, a habit which the Man upstairs has been trying to teach me for some time, and it would take more than several back to back record-breaking natural disasters, a nuclear meltdown and a hormonally infused family to alter Spouse’s daily routine. This is why I feel secure in our relationship- I’m a firmly entrenched part of that routine- it would take a lot to shake me loose.

So, there it is. The new normal. We’re flexible.

24 Responses to The New Normal