My view of the beach.

I lie loose limbed on the beach. Hammered. Spouse patiently pushes Offspring #2 to the start position surfing while Offspring #1 tests various versions of surfboards in order to find the one which will guarantee injury. One of the ubiquitous tourist families tramps dangerously close to my invisibly cordoned off area.

I roll on to my side, point at the youngest tow-headed blonde with my mai tai- “Hey- kid- want to hear the story about the time I was shipwrecked- with only a volleyball to keep me company?”

The mother “Hrumphs” and pushes the kids with her body, her hands fully occupied with floats, towels, beach bag, hat, while her body is layered with a folding chair and bottled drinks. I plop back down. Where was I before I was so rudely interrupted. Thinking. Worrying. Wondering.

About the last 7 months. What I’ve learned. Has it changed me. Have I done it right? In the early stages of planning the move, I read that cultural differences between the Eastern and Western peoples were insurmountable to business conduction, not until as late as the 1850s did Japan open to trade with outside countries forever changing her face. I gathered dirt in my fist letting it gently fall through, raised my eyes to Heaven, and vowed with heart-felt conviction to assimilate, mix with the locals, learn the language, and follow the local customs except in the case of eating eyeballs which I will not do again even if it requires feigning a seizure. Through out the last several days, I can see Japanese cultural values dictating their actions and I wonder just what it takes for an old dog to learn a new trick.

The day after the earthquake, the government announced rolling black outs, citizens were encouraged to curtail the use of power. Happily I complied by putting the washer and dryer in full shut down mode. Spouse questioned my motives by pointing out these appliances had been in non-working order for at least a week as he was out of clean socks. Unfortunately, the dishes could be hand washed. Well- that’s what I had kids for- so they got to work. Much to my amazement I learned that most businesses in Japan voluntarily implemented a reduced work day, with retail establishments – other than food or restaurants- operating only 5-8 hours per day. Many closed all together. Had I owned a business, I would have kept that sucker open 24/7, especially knowing my competition was closed, “Being there for you in your darkest hour.” I might be forced out of business during the coming black outs and uncertainty ahead. Giving away some free chotskies to ensure everyone knew I was open would seal my reputation as the go to gal. In the process, I would have driven a stake through the heart of my business because my actions would not consistent with the Japanese value of Giri. A duty or social obligation, doing what society expects of you. In this case, society expects all Japanese to preserve power in order to help those working on the power plant thus helping all of Japan, especially those most hurt by the tsunamis. Anyone not actively supporting the voluntary power reductions would not be seen as showing appropriate giri- and would suffer repercussions in a very quiet way- like through an empty store. Ninjo is the human counter to Giri- what the individual wants vs what society expects. 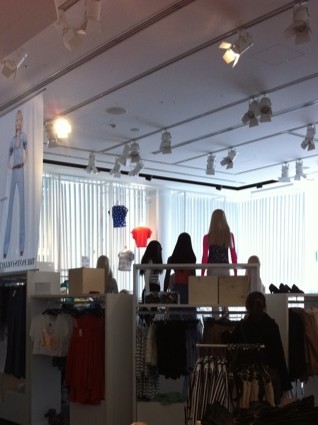 Thus far the majority of the people I’ve seen on tv have been foreigners. In one instance, a Japanese news crew attempted to cajole a passing group of Japanese folks in to an interview in the Sendai area. They were met with flat refusals. Me? Before being asked I would have scribbled a big note on my Mole Skin to hold behind the reporter, “Have the Air Force drop Chocolate.” Flash a peace sign. Humility. When I see a camera in Tokyo, I run for it, when the Japanese see it, they run from it.

Tokyo is home to 23 million people most of whom commute on a bus or train. Immediately following the earthquake, all trains were stopped, the only means of transportation available to the working public were the buses. Since average ride time for a commuter is one hour, most of the commuters had the pleasure of spending the night in subway stations or restaurants until Saturday morning. I go rabid when putting myself in a commuter’s shoes. After spending the night on the floor, suffering  a 9.0 earthquake, and dealing with uncertainty regarding family, these commuters now had to compete with 15 million other passengers to get home- all at the same time. And they all stood, patiently, in line, no pushing, no shoving, no yelling. No matter what, the Japanese are Polite. In this case, I would’ve walked home. It’s a shame I find astronomy so incredibly boring because it would’ve been extremely difficult to navigate home not knowing how to use the stars to find my coordinates. Always using the subway has left me in the precarious position of not knowing how to get anywhere above ground.

I’m from the South, as in the Southern United States. We’re huggers. It’s not affection, it’s a form of greeting. It goes like this, an ear crushing “HEY!!!” followed by a hug. A most appalling interaction to the Japanese when the Social Chairman and I greet each other- she’s a native of Tennessee and we are always so glad to see each other that a LOUD “HEY” ensues. Followed by a long, tight, hug. Japan is a “DO NOT TOUCH” society. Greetings are done with bows- unless a westerner is involved in which a hand shake is acceptable. Public displays of affection are considered rude and classless. Immediately after the earthquake, I returned to our apartment and one of the receptionists walked out to greet me. I said “HEY!!” and gave her a hug. A brick would have been more responsive. Just don’t do it.

Japan has been criticized for not requesting help in light of the disasters she faces. Resources from generous individuals and countries pour in regardless of Japan’s position. Japan will struggle with a concept called On– or being indebted. The Japanese are very careful to repay all gifts and favors shown. If one gives a gift to a Japanese person, that person can expect to receive one of equal value soon. The repayment is made in kind. Gift giving is a post on its own and one that I’m learning very well. I hope that On does not extend to natural disasters.

As I stirred my mai tai with a salty finger and  pondered these concepts, I was rudely snatched up by the back of my tankini,

“Honey, no more terrorizing the natives. You’ve had your fun for the day. Let’s go.”

23 Responses to Can Ouiser Walk the Walk? Culture Lesson #13