Shinkansen Travel. The Japanese Name for “Bullet Train” and the Clampitts preferred form of long distance travel. Tokyo, one of the largest cities in the world, becomes grid locked on the weekends with city folk desperate to escape. A 2 hour drive in or out on the weekends becomes 4-6. On the flip side, rocketing along the tracks at speeds of 210 mph is not only hypersonic, it guarantees even the most finicky frequent flyer a momentary thrill. Middle Schoolers make them appear as first time flyers when it comes to exacting demands for scrumptious snacks, expectations for superior treatment, and deluxe accommodations, therefore, given the choice of being locked in a car for 5 hours or reclining comfortably in a Shinkansen for 2, Spouse and I readily opt for the Shinkansen whenever possible.

Get too close to the tracks and the station master waves the red flag your way...

Why these aren’t all over the US and exactly how they can travel at such speeds without being derailed by a well placed penny is beyond my comprehension. Japan is about the size of California, slightly larger than Great Britain, and slightly smaller than France. Most areas in Japan are accessible in a day via Shinkansen and a bus, subway or taxi ride on the other side.

I might as well say it here, now, for all of you to know. There is English on the Shinkansen, and all the other trains as well. No need to worry about one’s exact location, disembarking at the wrong stop, or accidentally touring the entirety of Japan and ending up where one began- the announcements are in Japanese and English. Further, yes- there’s more to this confession- signage in English is posted through out all train terminals. The illusion of my superior Japanese speaking and navigational abilities now remains solely in my head. I’m a thief and a liar- well- more like an exaggerater extraordinaire. Dang it.

Here’s the grandmother of the Shinkansens…She’s slower than the new version- but roomy. 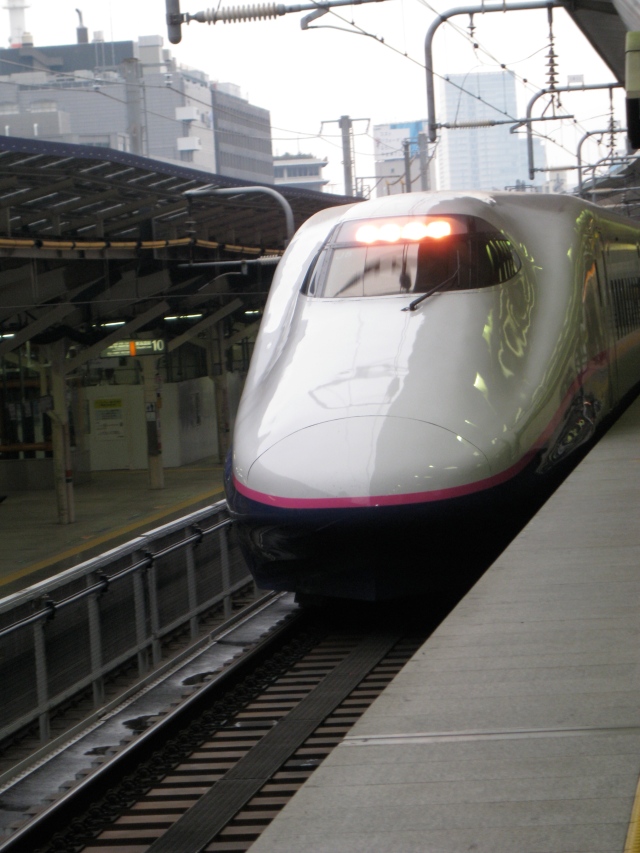 Three sections are available- non reserved, reserved and green. Green stands for “First Class,” perhaps after the “Green Room” used by actors awaiting their time on stage? I can hear all the New Yorkers now- “Fu git aboud it! We got dose up heya.” Except my grandmother in her long nightgown, with her Dobby knees and her walker could outrun the Acela express. Unlike train travel in certain parts particular to the US, most specifically in the Northeastern portion, along a precise route, geographically limited to the Nation’s capital, the city famous for birthing “Rocky,” and the third of the trilogy, the Big Apple, one does not have to endure the conversations of every passenger on board, simultaneously, all talking with their outside voices. Me yelling standing and yelling “SHUT UP” never seemed to do any good. Or it didn’t in my mind when I did it.

The Rocket of the NE United States- the Acela

I have excellent footage demonstrating the superior speed of the Shinkansen however, upon reviewing I started to get a tad queasy- which I did not experience on the train- and I fear it can only be attributable to my video skills. I’ll try again on our upcoming trip to Kyoto.

The big buzz in these parts is the new Shinkansen:

Pretty soon the Clampitts will go from this: 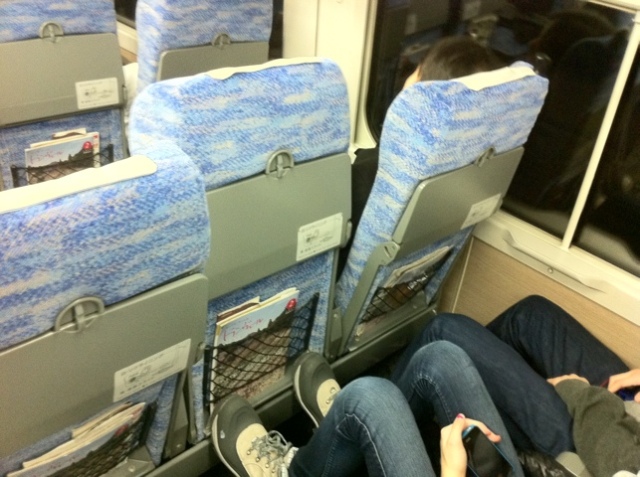 Show of hands- Shinkansen or the family van?