One of my favorite pastimes and one missing from my current ExPat lifestyle is “junkin’,” a term used for dotingly, carefully, and surrepticiously clawing through piles of used items while being careful not to arouse the attention of other junkers lest you draw attention to a particularly good cache of tossed treasures or trash, thereby causing a potential throw down in what is certainly an establishment on the brink of foreclosure. For a hilarious, knee slapping description of this phenomenon embraced by hobbyists and tree huggers alike not to be detailed in this post, please refer to the instruction manual and rule guide written by Dana of Zona Pellucida whereupon she describes certain codes of behavior and details of this form of recycling in  “Thrift Score Wednesdays” (Read Here) which I will include here as a reference. Then, one of the Seven Lucky Gods of Japan – probably Daikoku the god of wealth and retail shops- was somehow alerted to my withdrawal symptoms and threw some luck my way through one of my other most favorite blogging divas, Tokyo Jinja. 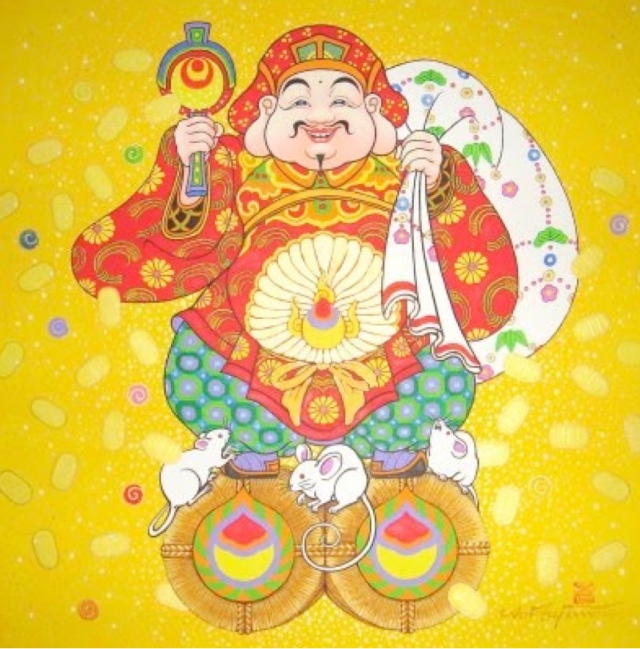 By apprising me to a source for junkin’ in Japan-The Shrine Sale-A flea market/Antique sale on the grounds of a shrine, the trendsetter for Asian influence in the home set me on a new course for filling our house with Nihon-jin kitsch.  As soon as I read her post, I emailed myself the schedule, Andretti-san downloaded the information, plugged in the GPS and we hit the road “with our hair on fire”. Junkin’ terminology for “Fully anticipating a successful day of shopping ahead.”

After weeks of pristine, crisp winter weather, the skies had their fill and disgorged buckets directly on me and Andretti-san. But the Shrine sale was on. Perfect- the rain would wash away my competition- no hagglers with which to compete for the precious booty laid at the foot of the buddha. My costume was chosen carefully. Gloves to hide jewelry highlighting any telltale signs of misconceived wealth and affluence, cross body bag freeing the hands for close examination of items, camera placed in pocket, holster style for quick draw, and money hidden in various pockets and purse locations so vendors would be unable to assess my financial worthiness when I claimed items “Tokai des ne”- so expensive. I just had to focus my eyes on those of the vendor for an inscrutible poker face as looking away is the best predictor of a liar, and prevent my nose from growing as I morphed in to haggling mode.

I was thrilled to see the van unloading the lavish load of  treasure when Andretti-san and I roared up the Tori gate:

Having forced Andretti-san to practice negotiation tactics in Japanese for the hour ride to Kawagoe, I declined his offer for translation and he sped off, tires screaming in the direction of the Eel House for lunch without even a backward glance. He didn’t understand my excitement.

Andretti-san- “Ouisan-san- why do you like old things? Japanese people like new things. You can find all this stuff in the dump. One time I found a two-year old Apple computer at the dump and I sold it for 500,000 yen. ($500 US) Do you want me to take you to the dump?”

Since Spouse thinks our dwelling should not contain items picked from the neighbors’ garbage (embarrassing when they come to visit) and I’m hesitant pick side by side with rats, I politely declined even though I expect to pay at least a 10% surcharge on all bought garbage.

It looked like the vendors were tardy given the weather so I bought a bowl of curry udon while I waited. 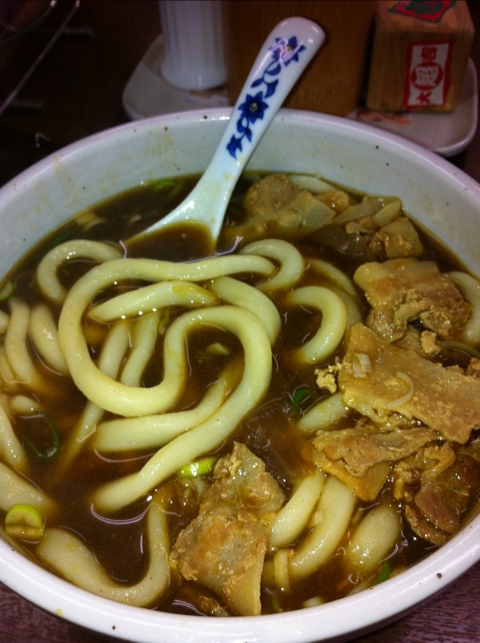 Udon’s not my favorite- the big, fat noodles dilute the taste of the broth and eating it makes me take on its appearance- big and fat. Just my opinion.

I finished, rechecked my costume, and proceeded in to the Shrine. In this case, Narita-san Betsu-In Temple in Kawagoe. One of the finest examples of its ilk. I hoped I could still babble in Japanese- I was beside myself with excitement.

Ahh! Not a person in sight- this hallowed ground was mine for the taking. 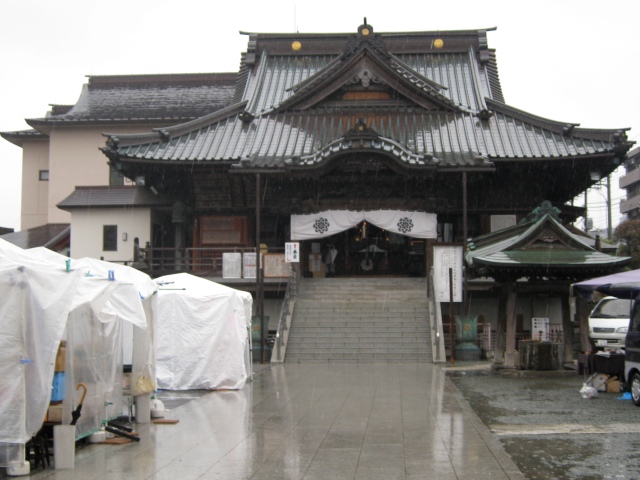 And then I saw this: 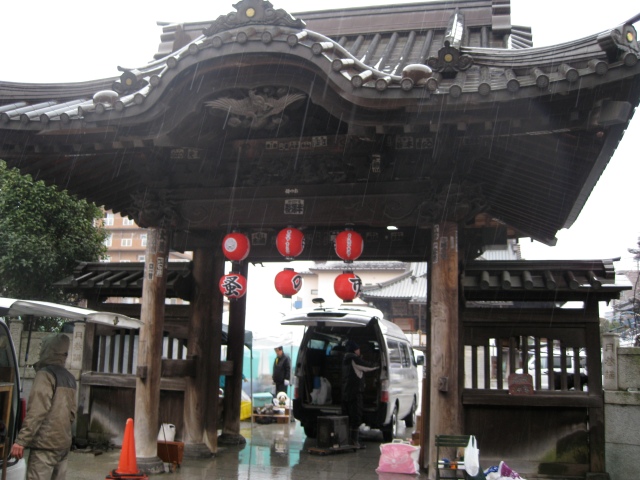 My victims, I mean, trade associates were packing up! This would put me at a disadvantage. I said a quick prayer to: 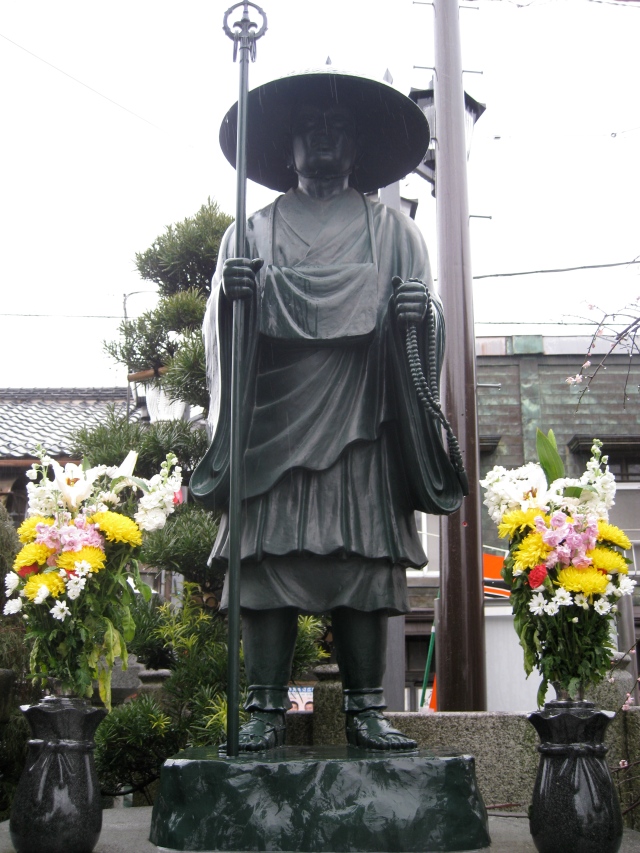 Seeing this, I quickly snapped it up in case Andretti-san and I had a flat tire on the way home:

I now began flying through the Shrine looking for any prizes not yet back in newspaper. I couldn’t dig through the rack of antique kimonos as the man on the right was stashing hand fulls in his van faster than I could push hangers.

The only die hards were selling “Hello Kiddy” inflatable dolls. Too big for the car.

Some interesting things here and there like these Kokeshi dolls- they aren’t supposed to have arms or legs.

A few Japanese Plums tried to peep through the gloom to let us know Spring is on the way and Cherry Blossoms will be next:

So as all good junkers know, some days are good, some days are bad. The good news is, I’m armed and dangerous for the spring days ahead where treasures lay in wait of a new home. And I’ll just be that much more prepared….

24 Responses to Shrine Sale or Bust