According to a high-ranking Japanese authority on cultural issues to whom I have close ties, hurling an insult might include calling someone an “Oni” in Japan- or demon. Spouse might claim that I’ve been inhabited by an Oni the past several days as I haven’t needed a mirror to check the back of my hair and dogs are running from me yelping. Therefore it was serendipitous that today just happens to be the first day of Spring, the Lunar New Year and the day when the Setsubun Festival is celebrated. The day when all the Oni are driven from Japan by catapulting objects in to crowds or out of windows.

Through out Japan, people gather in homes where the family head dawns a mask of the Oni and the rest of the family throws soybeans out the window or at the mask wearer. This purifies the home. People chant “Oni was soto, Fuku was uchi” which means “Demons out- Luck in.” The family then eats the number of soybeans according to one’s age plus one to usher in good luck.

The Tasmanian Bloodhound and I hopped on our Mama Cheri’s in order to throw some beans at an Oni. I thought I could sneak a few rocks in just to vent some frustration. No one would know it was me. The Offspring weren’t home from school so setting a bad example was not a concern.

Yoyogi Hachiman Shrine is the local site of the Annual Setsubun Festival. To get the party started, the ladies started rocking the taiko drums. 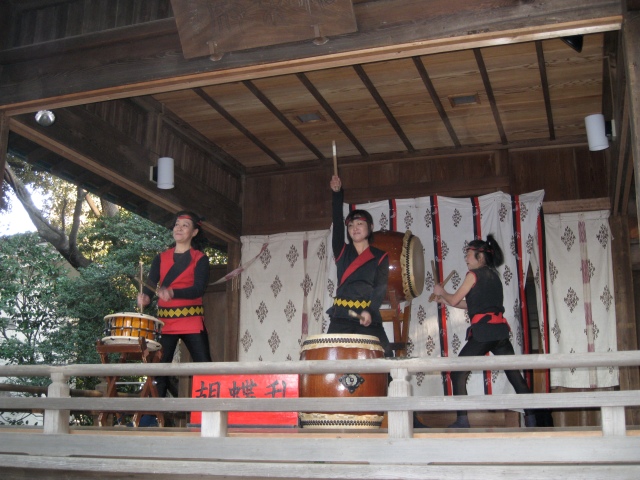 This infused the little kids with as much energy as 3 Red Bulls shot gunned like an experienced college senior. Next the local dignitaries gathered on stage with tangerines (in Japan called mikan) and mochi (pounded rice cakes) in bags to throw at the crowd. I mean toss to the crowd. At other shrines, stars and sumo wrestlers participate in the revelry. 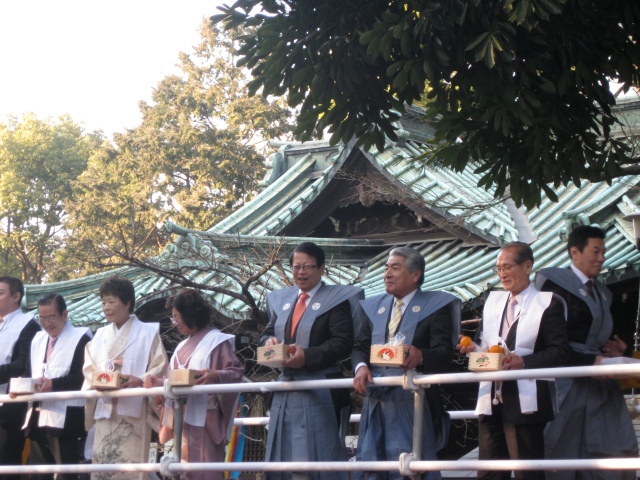 In order to help protect themselves from the flying tangerines and the rock like mochi, and to catch as many as possible, the crowd caught the items with bags and bicycle helmets. 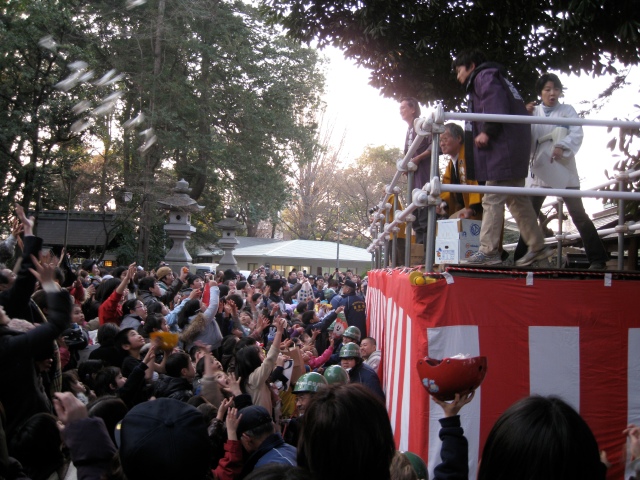 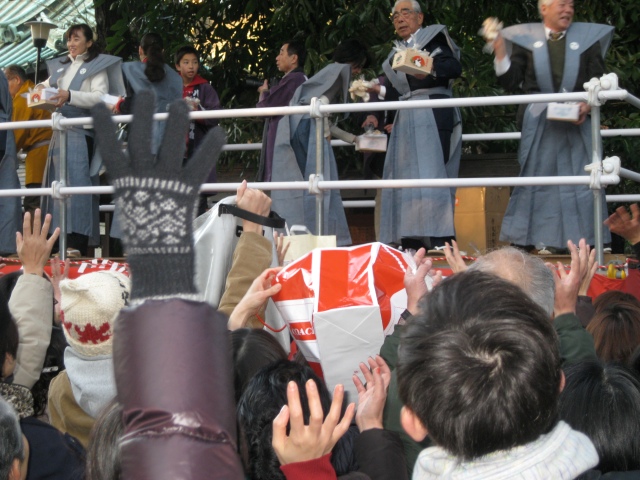 The Tasmanian Bloodhound caught a mochi. 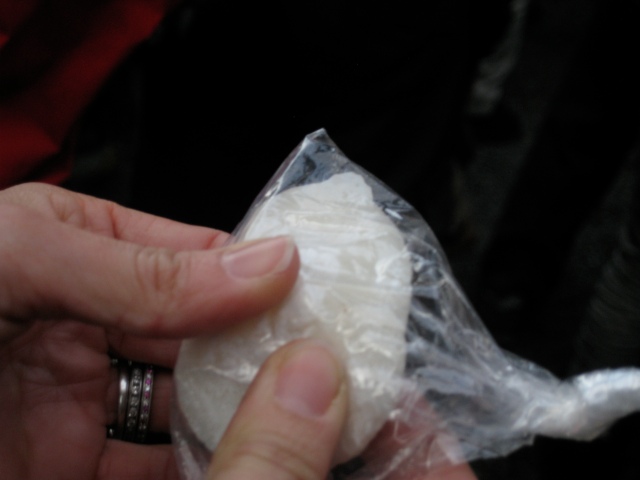 This was not a festival for the weak at heart. A kill or be killed environment, the Tasmanian Bloodhound bowed out after bouncing a compacted mochi missile off the top of her head. Two moms took each other out over a tangerine and fell wrestling to the ground- one on top of the kid she was holding.

Then it was over. No Oni. Where was the famous Demon? I was really looking forward to throwing stuff at a Demon. Dang it. A very over rated trip to the shrine in my mind.

Still the celebration for ushering in good luck continued. I stopped at the grocery store for the remaining supplies. First, Spouse would need the mask for impersonating the Oni.

It wouldn’t be fair to throw rocks at Spouse to release the anxiety since he wasn’t the cause of my frustration and of course he would know it was me so soybeans would have to do. Spouse and I would need to ingest at least two bags to cover our ages.

Finally, uncut maki is eaten for dinner. This is actually the only time I’ve seen maki in Japan.

Fish heads and holly leaves are hung on the doors to drive away any lingering bad spirits. Fish heads on someone’s door would definitely keep me from entering. I didn’t see any of these decorations. I wonder if the Japanese know this is part of Setsubun? I did find some dead sticks with some Holly-ish looking leaves for sale. Maybe an Oni is preferable to these pitiful prunings.

Spouse was at a meeting during the day outside of Tokyo and relayed a conversation held with a Japanese man. Fear gripped the poor man as this was the second year in a row he had missed the Setsubun ritual of playing the Oni for the family and his wife was not happy. He was  much more afraid of his wife than any Oni.