Their nickname- not mine. Apparently everything one could want on a hiking excursion one hour outside of Tokyo- all Japanese. The Social Chairman and I set out armed to the armpits, she with the file folder of maps and information and me with the Japanese skills of a toddler and a phrasebook. We joined the throngs of commuters to test Bento Box hiking. Included in the all-inclusive set menu were claims of stunning views of Mt. Fuji, snow monkeys, cascading waterfalls, shrines, babbling brooks, panoramic look out points, a traditional Japanese village at the base, and a Mt Takao buckwheat noodle. (??) As my mother says, “We were off like a herd of wild turtles.”

The SC and I met at a train station along the way and most commuters within a 3 mile radius heard our joyous reunion. Both from the South, (as in the Southern United States) the site of each other brought on an ear drum crushing “HEY” and a running hug. All the people on the platform jumped with nervous anticipation to see what had caused such an outburst between two grown women. Was someone hurt? Dying? In racking pain? A rapid chain of apoplexy cascaded down the commuter lines of Japanese at the onset of the embrace as this culture has a very strict “NO PUBLIC DISPLAYS OF AFFECTION” rule in place at all times- children included. The peace on the platform- and through out the rest of the day- irrevocably disturbed by the effects of kinship causing our confabulation to balloon in both volume and intensity.

Upon arriving at Takao-san (for some reason mountains are referred to as if they are a person) we elected to ride the ski lift to the first viewing point. As far as I know, the elevation does not support snow therefore the lift transports walkers only. The Social Chairman and I had to hold our legs aloft in order to prevent them from dragging the ground beneath our feet- the mountain dropped steeply on either side of the lift. Given there were no guard bars, getting ripped out of the seat by a dragging foot certainly would have made for a difficult descent- assuming it was made in an upright and not a rolling down the hill fashion.

The first viewing vista provided a stunning view of Tokyo and Yokohama. So stunning we didn’t take a picture of it.

Nagano boasts two famous facts: host of the 1998 Winter Olympics and home of the Snow Monkey. A National Geographic Poster Child, cute, cuddly, usually pictured with fur fluffed up, sitting in a natural hot spring surrounded by snow with a few friends. Mt. Takao houses a merry band of these primates. The SC asked permission to enter the sanctuary. Afraid to hurt her feelings, one of the Japanese keepers brought out one of the babies on a leash. He’s about 6 months old. This is what “Charmed” looks like when he’s happily eating an apple, perched on one’s arm. 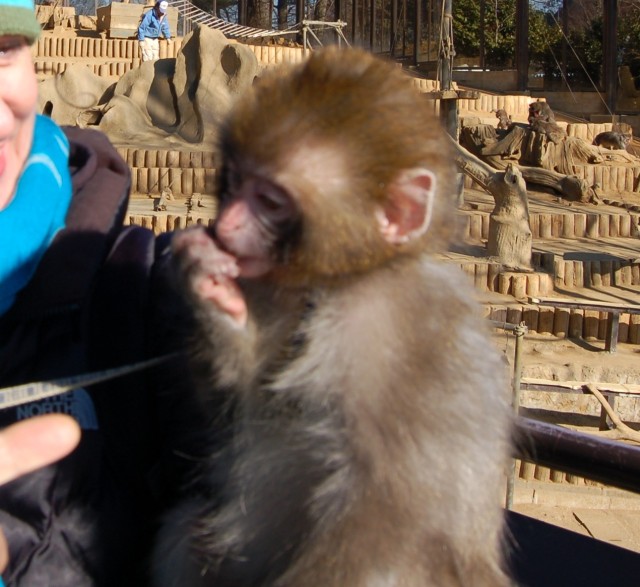 Here’s what he looks like when he’s about to take a big plug out of your finger. 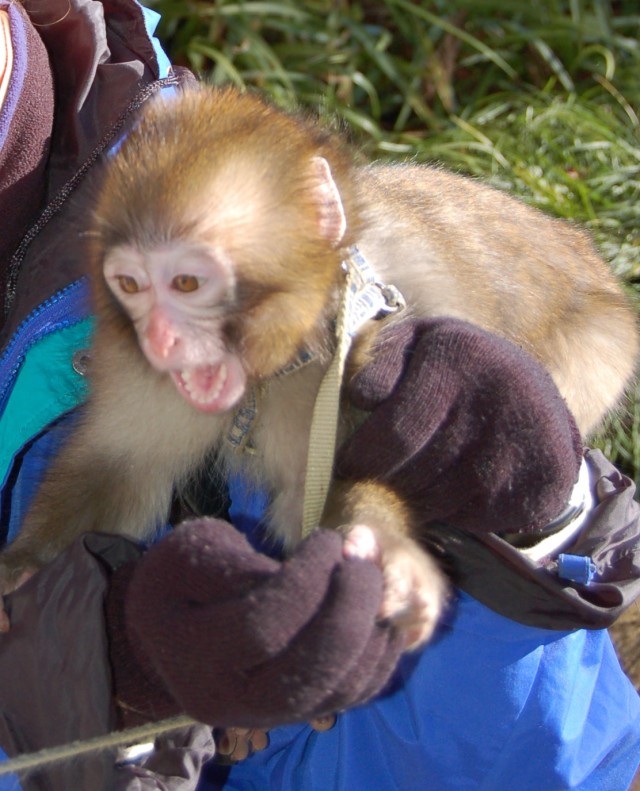 In case you’re wondering, when the Social Chairman screamed, he jumped the five feet from her to me with lightening speed, scuttled over the top of my head and down the other side. He was all climbing hands and feet. I will carry this picture in my wallet at all times to show all of the SC’s friends and family- “Here’s Charmed right before he bit her.”

As difficult as it was to leave the Biting Banshee, we continued up Takao-san toward the shrine. 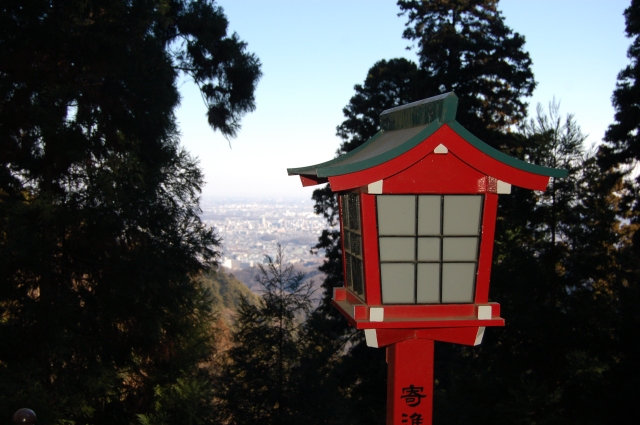 The Buddhist Yakuo-in Temple on Mt. Takao is home to two Tengu- long-nosed demons which dwell in mountains and act as messengers to the deities and buddhas. They protect the good and punish the bad. Usually depicted with uchiwas (Fans) to sweep away misfortune. They also bring in good fortune. The smaller one with the crow beak continues his religious training while the one with the long nose has reached spiritual power through training at Mt. Takao. Here are their formal statues.

And their cartoon versions – the more familiar face to most Japanese: 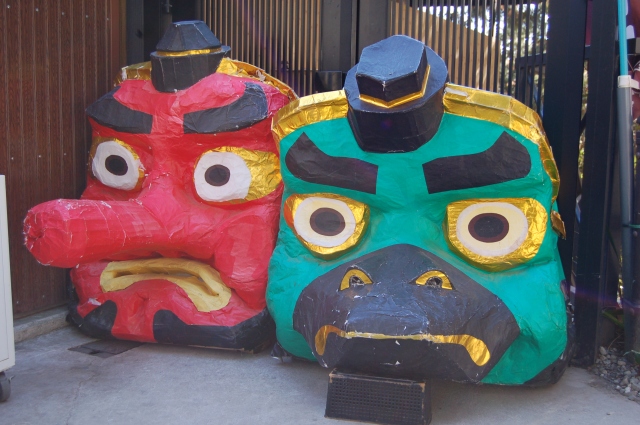 It’s very cold here so everyone was dressed for the winter chill.

Following are pictures of the Temples: 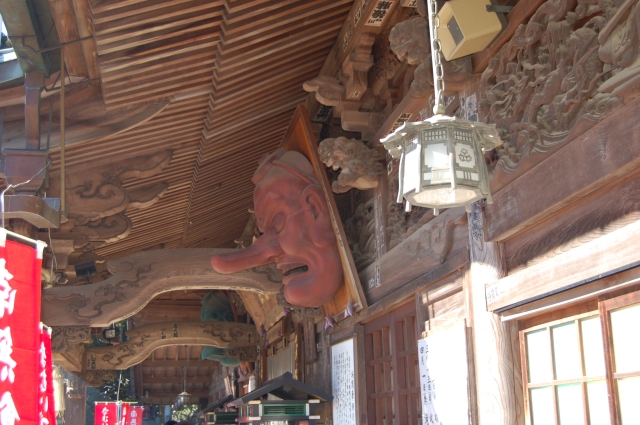 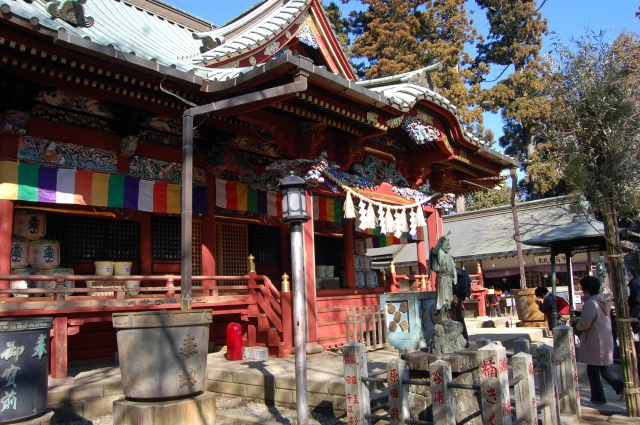 Along the mountain, temples were tucked in to waterfalls and caves.

Bottles of sake offered to Daikoku, one of the 7 Lucky Gods of Japan.

Here a man chants prayers with bells and other instruments. I don’t have a picture of the Social Chairman getting a close up of his face as he prayed. I was busy investigating a lichen outcrop at the time.

After all this picture taking, I mean hiking, we’d worked up a real appetite for those famous buckwheat noodles. The summit hosted the famous fare.

You’ll have to trust me- there is a scenic traditional village at the bottom of the mountain. One shot I missed- three fish being roasted on a spit surrounded by bamboo cups. We stopped to inquire about the cups. Apparently, the fish get put in the cups, sake is then poured in the cups with the fish and drunk, and the bones discarded in another cup. We’ll try that next time. And I’ll take pictures of the Social Chairman as she drinks.

Photos compliments of the Social Chairman