As did thousands of other travelers, the Clampetts took to the skies for the holiday season. Unlike most ExPats who either returned to the US or headed for sun, we headed North to one of the world’s most precious and unknown snow powder Mecca’s of the planet- Niseko, Hokkaido. Reputed to rival the Western US and Canada for quality powder and surpassing all but Mt. Baker in annual snowfall. Offspring #1 had to be bound, gagged, and locked in a closet in order for the rest of us to endure the days leading up to the trip.

The resort lured with natural onsens (Hot Springs), ski in/ski out access, spa, countless restaurants, hours of entertainment for indoor and outdoor lovers alike. Visions danced of warm fires overlooking idyllic mountain views, fresh snow twinkling in the sun, the Offspring careening down the peaceful slopes like banshees grating on every nerve of the unfortunate souls in their path while Spouse and I relaxed with a hot sake blissfully oblivious to the Hell caused outside.

Just one major problem standing between us and the resort- getting there. The intimidation factor of traveling through a country where one is both illiterate and effectively mute can be debilitating. Trial and error has produced a number of strategies used by the Clampetts which allow us to travel unencumbered by our inability to communicate effectively with 99% of the people we meet. One must first be willing to shed all vestiges of pride in order to enact these rudimentary interpretative travel tools.

First, one must accept- and get used to – the idea that for the most part, the signage is unreadable. Once one comes to terms with this inevitability, and the GI distress that accompanies that fact, the journey is more palatable. Learning to depend on departure times, recognize flight or train numbers, and the logo for the airline or carrier becomes the objective when all else is indecipherable. 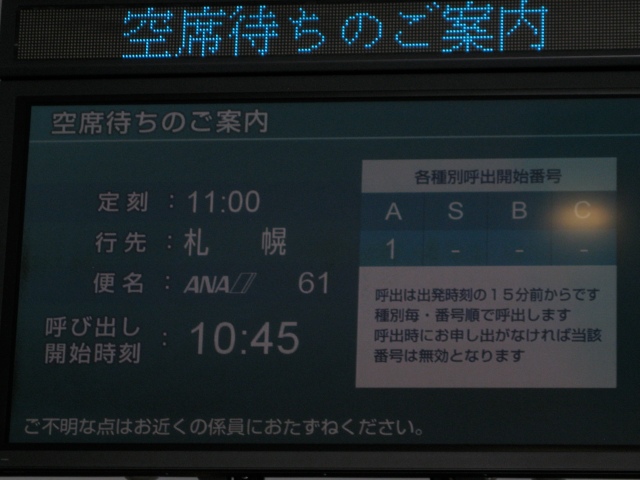 One must also keep your sense of humor. I for one have never seen a true flying Pokemon. 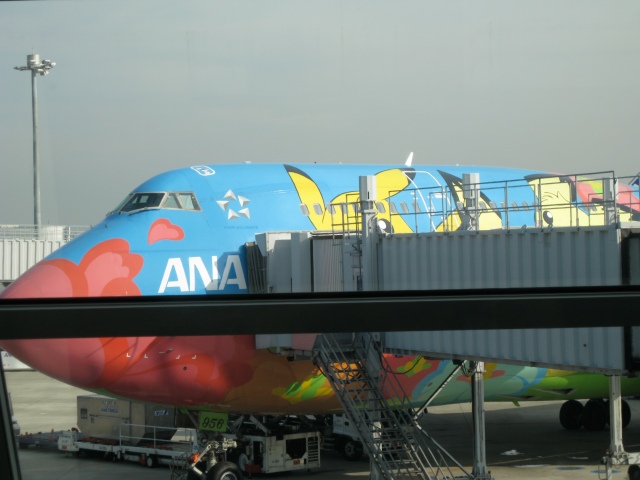 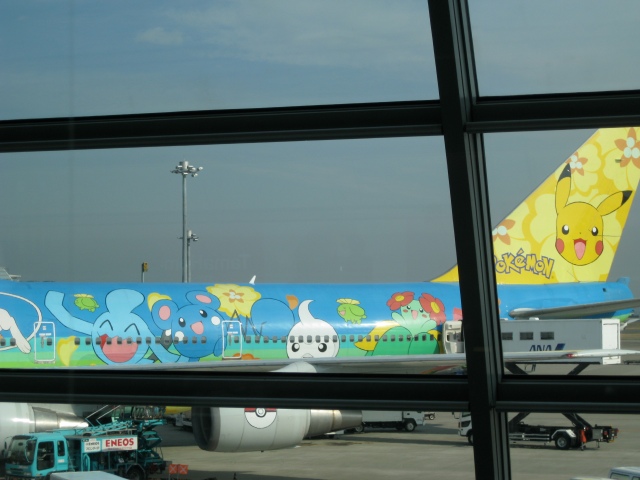 Nor have I seen this new camera attached to the bottom of the plane which allowed me to shoot the landing of the plane as seen from the pilots’ perspective.

It doesn’t matter what level of Frequent Flyer one happens to be when a member of the Clampett family, crew instructions are viewed as guidelines vs rules. Spouse was called out several times for grievous errors involving electronic devices and headphones while Ouiser ignored crew advice regarding seatbelts, seat backs and walking through cabin prior to reaching 10,000 feet. Both Offspring kept track of parental gaffs in dismay given such well-traveled parents could rack up that number of blunders prior to reaching cruising altitude. We adjusted our attitudes for the return trip.

Case in point that even the well-known phrases can cause confusion so I carry two cartoon books which are “Point and Speak.”  At least one of these books are with me all the time. Level 201 requires anticipating the phrases one might use, writing them in advance and potentially memorizing prior to needing. For example, “I have reservations, where is the bus stop, etc…..” however, I prefer to point in a panic, flying by the seat of my pants the rest of the Clampetts in tow. 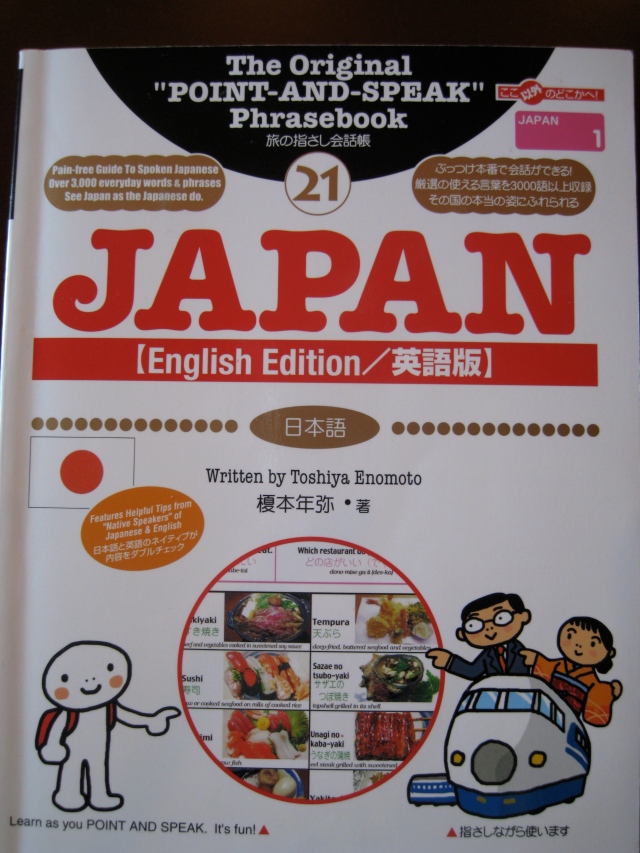 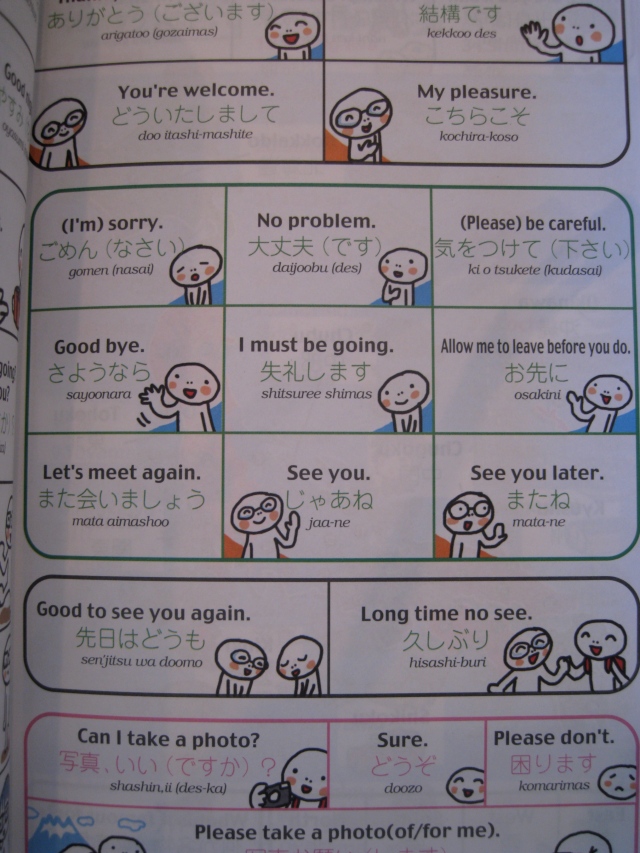 Don’t be afraid to whip out handwritten instructions. My trusty go-to Andretti-san wrote out instructions for the airlines requesting that we be re-seated together. I happily thrust it in the face of the waiting clerk who happily complied. 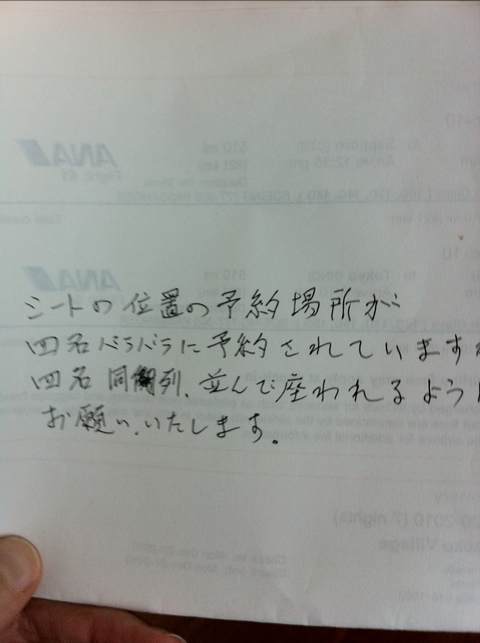 For those with IPhones, a trusty app “Translation” will allow one to type what needs to be translated and it appears in the language of choice. The drawback is one needs a 3G or Internet connection in order for the conversion to work. I’ve found this only works 50% of the time, never when I need it most, thereby rendering it “last resort” only.

“To be Forewarned is to be Forearmed”- Know where you’re going. Map out the entire itinerary as if it’s a military invasion. In our case, we needed to catch a bus at the airport. Bus travel is a primary means of travel in Japan and there are thousands of them. One piece of advice- the hotel will advise one on the bus (or means to transferring to hotel) to book and can do it on your behalf. Additionally, the internet provides pictures of the buses, boats, or transfers which are crucial for recognizing en route.

In order to maximize our chances of getting on the bus, this was orchestrated as if it were a page out of “Catching a bus for Dummies.” Yes-I admit it- a map was printed of the airport with the bus location highlighted.  This is where Spouse and I are a one- two punch. If I read a map- we’re headed for disaster and destined for failure. As soon as we get off the plane, the hand off occurs. Spouse gets the map. All follow in single file behind Spouse in a direct line – the shortest distance between two points- to the mapped out location- in our case – the bus stop.

We recognized our bus among the thousands by the phallic symbol painted on the side. Since it was sporting a crown it must have been unintentional. As the Offspring laughed and frantically grabbed for cell phones I quickly intervened, “That is not an appropriate picture for Facebook,” which was immediately followed by a retort from O#1 “This is not an appropriate picture for your blog,”  Let’s just say our bus was easy to spot amongst the crowd. Trying to set a mature example for the Offspring, I resisted the overwhelming urge to sneak a picture of the logo to post below.

As always, one must be prepared for the same chorus that every parent must endure. “How long until we get there?” To which Spouse and I have adopted a few new ones to go with the old ones…

“Approximately 3 hours to one day”

“Is that Shaun White?” 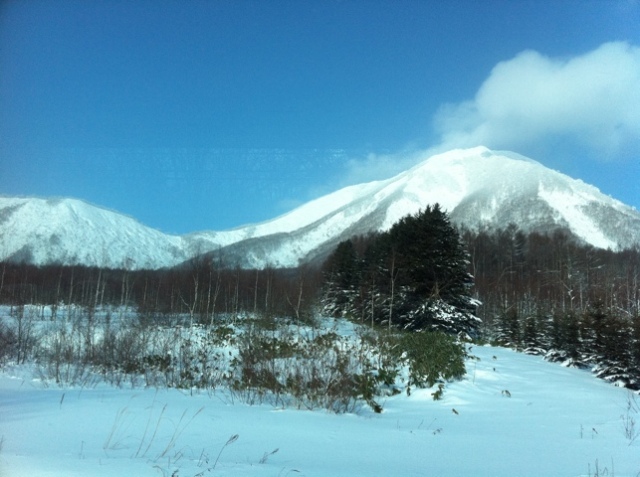 Like Loading...
This entry was posted in Moving to Japan and tagged Culture, Hokkaido, Japan, Moving, Niseko, Travel. Bookmark the permalink.

10 Responses to The Clampetts Hit the Road- Travel Tips