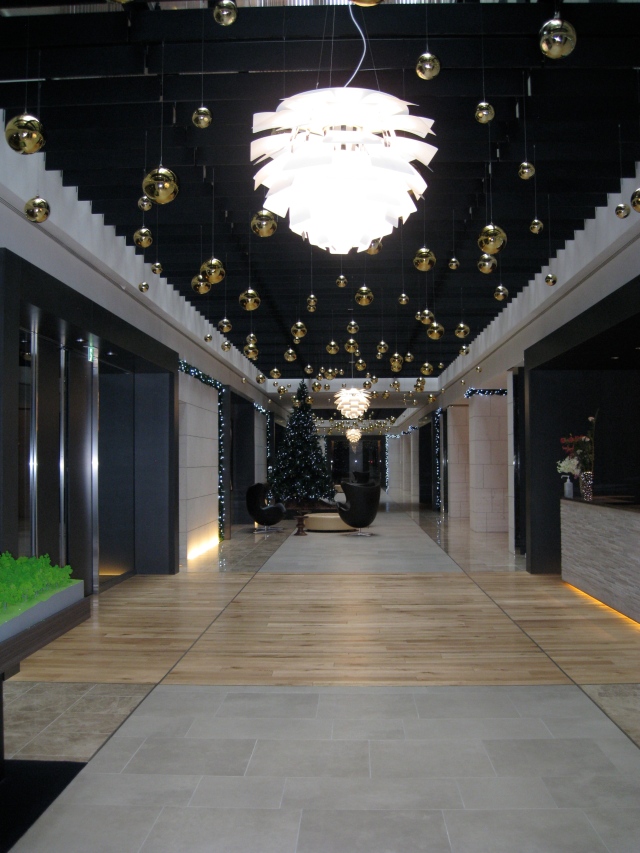 My favorite neighbors are the ones that honk and wave, smiling as they drive by. Without stopping. Preferably there are 8-10 acres, a herd of cattle and a stream between us as well. This keeps idle chit chat to a minimum, forces conversation to be substantial and/or need driven. Neighborhoods that relish the dine around, impromptu Saturday night barbecue or annual Christmas Cookie Swap force me in to the role of neighborhood Scrooge minus the end of story turnaround. Spouse will be hidden during these events not to be seen until long after the last guest has stumbled home.

This basic need to be left in our cave undisturbed presented quite a delimma for the relocation company attempting to find the perfect temporary home away from home. Most Americans stampede for the ExPat neighborhood, comforted by compadres from home, familiar restaurant chains and International grocery stores. I fretted over price gauging and whining Wisconsonites crying about the lack of English-speaking cable channels. “The Tokyo American Club is just around the corner from this one,” forced the quote “Are we moving 7,000 miles from home to move to little America,” or some variation from Spouse.  Visions of  “Howdy Neighbor- where are you from? We’re having a pot luck on Friday! Come on over- great way to meet people,” danced through my head in a garish nightmare as apartments were shown to us in the traditional ExPat areas of Tokyo. Assuming I wanted to meet people, the neighbors would be on us like sticky rice. We  bucked convention and moved outside of the ExPat boundaries of Minato-ku choosing to live in a predominately Japanese neighborhood instead.

We found the perfect apartment. A low-rise, next to the Central Park of Tokyo. Three elevator banks separated the inhabitants from each other. According to my math, one-third of the building’s tenants might be encountered on a routine basis. With that third, we’d  be unable to converse. About as good as apartment co-habitation gets.

It was somewhat disappointing to discover the amount of children that went to Offsprings’ school which was an indicator of the higher prevalence of ExPats than originally estimated but on a positive note the elevator bank still remained a true barrier to verbal exchange.  The Offspring didn’t need my hovering presence at the bus stop which provided a screen from the Moms. I did meet one mom on the first day whom I nicknamed the Tasmanian Bloodhound- she was a whirling dervish of forward motion sniffing out anything and everything of interest in Japan and absolutely nothing could escape her schnozz. I liked her on sight.

A Christmas Party Invitation thrown by the Building arrived. It never got a glance as it went from the mail pile to the garbage pail. The Tasmanian Bloodhound sent a message that she had caught the scent and it was good. I resisted. She persisted- reinforcements (her friends) were being brought in from the outside just in case of an excessive and unexpected lame factor. The Tasmanian Bloodhound never leaves a based uncovered. Something occurred to me, elevator banks designed for privacy, building nestled next to a park, more families going to international schools than originally estimated- others had chosen this building for the same reasons yet I hadn’t seen but three or four including the two families on either side of us. Could it be that we landed with like-minded individuals?

I peeped at the invitation posted at the concierge counter in the lobby. “Ouiser-san, are you partying?” one of the women dressed in black asked politely. “Maybe. I hate parties unless it’s my birthday.”  Undeterred she flashed right back,” Sake, desserts, a raffle, a band.” Grown up party treats – none of interest to me. I knew a famous movie star married to a much younger golf pro lives in the building- according to our driver. He caught sight of Mr. Movie Star once and almost drove the car through the lobby trying to get a better view. Curiosity killed the cat…..but if I had to spot him at a building party cause of death would be”Bored to death.” I decided on a drive by to investigate the neighbors. Spouse claimed a late dinner meeting.

I encountered my Japanese neighbors on the way out the door whose four-year old son is my math tutor. He began to school me on 1-10. Itchi, ni, san down we went on the elevator. The doors opened and Aiki saw the scariest sight known to many children, the CLown. Too late, the clown saw him and started over. Aiki grabbed my hand and started to claw his way up my body. He looked up and realized I wasn’t his mother at the same moment the clown reached for the terrified Aiki. All HELL broke loose. All I heard was the shredding fabric of my dress as Aiki tore his way up my body, the clown clawed for Aiki, Aiki clawed for his mother, and I clawed at the clown. The Grandmother shrieked in Japanese. The party watched. This was how I introduced myself to the building- in a clown fight.

Never let ’em see you sweat. Given my hair is the texture of a brillo pad it survived in fine shape so I adjusted the remainder of my the dress, feigned my finest smile – a dysfunctional childhood allows one to do this- and sprinted for the bar. The Tasmanian Bloodhound had a mallet in one hand and a drink in the other as she raced through the crowd. Hmmm. No one else I knew. A group of French around a cocktail table. Best to bust them up. I launch in to quiz mode. Party goers- this is a best practice. Keep the conversation off of you and on to the other person. When you leave, the conversation has been all about them and not one word has been exchanged about yourself. You don’t have to say a word, divulge any secrets, and the other party usually has warm feelings regarding the conversation after. I learned that while in France, one must stand “Butt to groin” with the person standing in line in front of you or someone will cut in line.

Next table, some Americans.

American- “When are you going to the US?”

American- “That’s IT? You’ll be the only ones in Tokyo- everyone leaves for the summer.”

Ouiser- “I think they’ll be at least one other person in Tokyo. We’ll use the opportunity to travel- see places we wouldn’t otherwise go living in the US”

American-  Snort…” You might be sorry you stayed.” I thought the French were supposed to be the Snotty ones….

Interesting ExPat habit- vacate the premises for the summer to go hang out in the US. Here the Clampett’s differ from the norm- shouldn’t one take advantage of the unique travel opportunities while here? If living in the US would we take 4 days to travel to Eastern Hemisphere countries- no.

Later I decided that the Clampetts wouldn’t be alone in Tokyo, we would have the husbands’ girlfriends to keep us company while the wives and kids went back to the US for the summer.

Time to move tables before I got in to my second fight of the evening.

At this point, a woman introduced an artistic man. The ExPats continued to talk as the man addressed the crowd while the Japanese busily took the man’s picture or video. Naturally, he was a famous artist Eldnac married to- of course- an actress. His beautiful candles lit the entryways and driveways along the building. Watching him inspired me to inflict my floundering Japanese skills on new victims. I hit a new table.

“Haichme maichite- Ouiser des- yoroshiku onigaishimas” I smiled at the Japanese couple. They looked at each other, then at me. “Hi Ouiser- I’m Sandy and this is David. We’re from Chicago.” 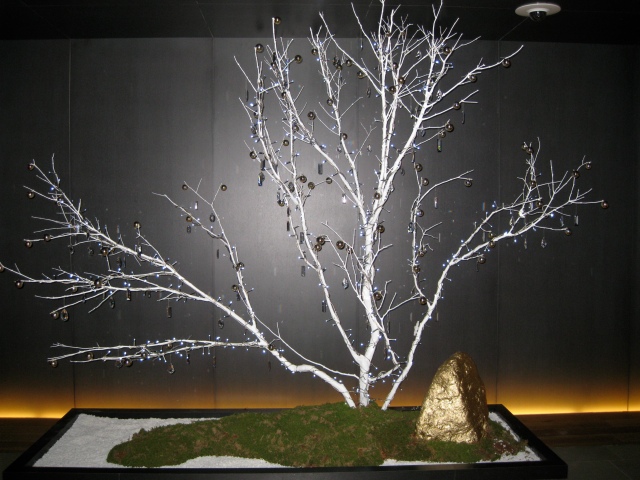 Another announcement and out came the reknowned chef Pierre Herme. I was star struck so I followed him around for a while. We each got two desserts. Finally an American sized portion. The building actually owed us three desserts- we certainly pay an exorbitant amount of rent.

Where was the movie star and the golf pro? They should be easily spotted- he’s in his 50’s, she barely 25. Elusive. Apparently the red headed tall Japanese man in the corner was a baseball player. That explained his presence around the building during the day- unJapanese.

I hadn’t seen Spouse sneak through. Apparently he’d opted, after many viewings of “Man vs Wild,” to enter through the 3rd floor balcony- Bear style. Pitch briefcase over first, catapult over fence, climb tree, rock climb across remainder of building via tiny finger hold crevices in granite facing until balcony destination was within reach. Voila- home- invisible.

Drum Roll. Something big. Tasmanian Bloodhound, the Artist, and two others were on stage with mallets and a sake barrel. On the count of 4- or something akin to that- the four hammered the top off the barrel. Sake was past around in square, lacquered cups. When drinking from a square sake cup- sip out of the corner. Otherwise it pours all over the face. Just saying.

Someone sidled up – Offspring #2.

Ouiser -“Yes- thanks for checking. Do you want some sushi BEFORE YOU GO BACK UPSTAIRS?”

O#2- “No.” She watched the waiter expectantly as if he were supposed to give her a sake. He looked at me with raised eyebrows. My return look was more of a “What the Hell” and he kept walking.

Ouiser- “Interesting- ” I thought I’d told her this wasn’t a kid party. Of course that was before I fought the clown. She apparently thought that statement applied to some other kid that lived with us.

O#2- Big eyes on me now- “But Swissy came by and said there was a clown so I thought I could come down.”

Ouiser- “Actually, I’m ready to go- let me just make one sweep through to see if I can spot the movie star- you take the other side and we can walk back up together. Look for an old man with a young girl- hanging on eachother- they’re newlyweds.”

Ouiser- “That’s what I’m hoping for- find me if you see it.”

I said good-bye to all my new friends while Offspring #2 and I did the final search for the stars. We didn’t find Mr. Movie Star and Mrs. Golf Pro – that guarantees my attendance at the next Building Event.

Like Loading...
This entry was posted in Moving to Japan and tagged Christmas Party, Humor, Japan, Moving, Offspring, Travel. Bookmark the permalink.