It is true, the Japanese are smaller than Westerners. The largest shoe size available for women is an “8” according to a friend of mine who works for Nike Japan. Shoes are also wider than American counterparts- thank goodness for me. According to Offspring #2, the reason I swim “so fast” is due to the uncanny resemblance of my wide, triangular feet to the duck species. Spouse is not so lucky, towering a full foot above the average Japanese male, all clothes must come from home. A nice boon for the family however, as it makes him easy to spot in a crowd.

The Japanese are also smaller around the middle. How could that be with a population that eats rice at every meal- including breakfast? Spouse and I are also starting to shrink. Not by choice. Not that I couldn’t use a nip and tuck here or there. Back fat doesn’t look good no matter tightly squeezed in a Tshirt but here’s my issue- I don’t want to be forced. I like to be in control of my shape- or lack of it.

Example #1 Forced Portion Sizes: This is the biggest serving of ice cream one can buy at the grocery store. What was formerly the family “bite size” has become the family “portion size.” This little gem costs the same as a 1 gallon size back home. I’m shedding tears and pounds as I write.

Bread is in extremely short supply and when you can buy it there isn’t much of it. Here’s a large loaf. At least the butt ends are removed.

Example #2- Increased fruit portions: The fruit is lovingly wrapped and presented in such a “take me home- I’m delicious” sort of way. You have to buy it. No rotten fruit allowed in the grocery store- No flies, no bruises. Through some Japanese trick, we’re all eating more strange fruit. This is a cross between a pear and an apple.

Example #3- Make What is “Bad for You ” inedible: Then there are times when you bite in to what you think is a perfect replica of a New York bagel (ie bad carb) only to find it has been the victim of a favorite Japanese cooking technique- fruit filling. Looks perfect on the outside- disgusting on the inside. 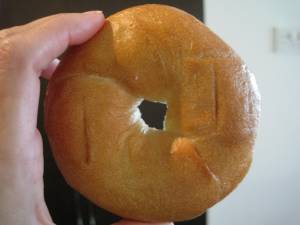 Example #4- The Sweets aren’t Sweet: Following is a picture of a Japanese sweet. These are rice crackers covered with sugar and salt. I don’t know any kid that would dive into this bowl with the same enthusiasm as a bowl of M&Ms.

Example #5 Exercise: I guess some of the unaccounted for slimming can be attributed to the carting of said groceries on my back and on foot. I guess it is actually true that one loses weight when more calories burned exceeds calories ingested. Of course, Tokyo is a walking culture due to the public transportation system however, the Japanese are exercisers.

One of the first Sunday mornings after our arrival, I went for an early morning run. I was engulfed and subsequently passed by several groups of elderly out doing their first loop. Hundreds of people all do Tai Chi at the same time- all perfectly silent. Creepy. I noticed many lovely couples, mixed and same-sex running hand and hand joined with bands. How sweet. Then it dawned on me- they’re blind. All passing me like I was standing still.

I expect some guy with a trench coat, hat, and sunglasses will pop out from behind a tree and say,” Ambler angel, we know you abused your body in the 80’s, you’ve been involuntarily enrolled in a placebo controlled, double-blind, randomized, study involving looking at the impact of a forced Asian diet in the reversal of Western living on longevity. Anything you say or do can and will be used against you in a court of law…”

At the end of the day, it all boils down to this: no food out of a box, more fruit, less sugar, more exercise, fewer calories- I wonder if this healthy living will help spouse and me live to 100. If I make it to 100, I’m going to start smoking again and he’ll fish longer. Now that’s something to look forward to…

Like Loading...
This entry was posted in Moving to Japan and tagged Diet, Japan, Moving. Bookmark the permalink.

6 Responses to The Incredible Shrinking Woman