There is a saying in Japan, “You are born Shinto, married a Christian, and die a Buddhist.” Shinto is one of the religions practiced in Japan. The basic belief is that Kami- spiritual deities are present in everything. These benign deities have no counterparts to other religions as they are not omnipotent or omnipresent. Their sole purpose is to protect. The kami primarily reside in natural objects such as rocks, streams, trees, mountains, etc. Shrines are focal points where the presence of certain kami is stronger. In those places, offerings to kami are made. Shintoism was first recorded in the 5th Century BC and some of the shrines in Japan date to 600 AD.

Since trees house kami, all are treated with reverence. Tokyo was bombed during WWII and rebuilt during the post war era and the new contemporary concrete city of today was born. However, this city of concrete was built around the trees that survived. When my “Top 10 Tokyo List” is final, the fact that it is the greenest city on Earth- literally due to trees and recycling will be at the top.

When exiting the Akasaka train station, I noticed these enormous lamp posts. I thought they were so Japanese, recycled, a juxtaposition of something old with something modern and contemporary, and a renovated home to the kami that inhabited those fallen trees. 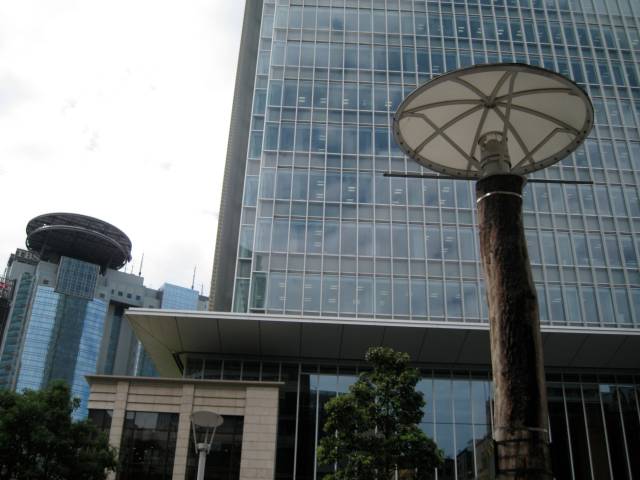