In keeping with my recent theme, I of course had to write about the family outing to see one of Japan’s most important cultural forms of entertainment-Sumo wrestling. Sumo is the national sport of Japan in spite of what you may have heard. I have always been fairly bored watching sumo on tv – unending stops and starts, action lasting only 20 seconds, fat men wearing no clothes. Unappealing. (Apart from the clothing sounds a lot like baseball…) However, my opinion changed once I better understood the energy of sumo.

The Sumo match starts in the morning with the highest ranked Sumo, the Makuuchi, performing last. Prior to the start of their matches, the Sumo parade around the Dohyo (elevated ring made of earth where the match is performed) in traditional attire. A man enters the ring and begins to sing with an open fan held in front of his chest. I have no idea what he is singing about or to whom. His voice carries through out the venue without a mic. (This is a skill unique to the Japanese- an ability to make their voices extremely loud without yelling)This marks the start of each new match. 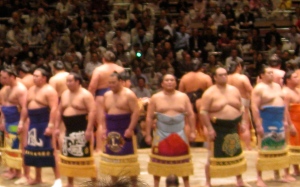 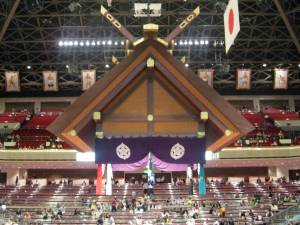 The wrestlers enter the dohyo. Each wrestler starts to perform their shiko exercises. The wrestler lifts each leg high in the air and stomps it hard on the ground. This is followed by beating of the legs. The wrestlers take a hand full of salt and throw it on the ring for purification and strut toward the center of the ring. Now starts the belly pounding. This sounds like the beating of a drum. The referee gets in position.The sumo face eachother. They are about to start. The sumo squat and face off. One gets up. He’s called off the match. The other gets up. The entire ritual starts over. Legs go higher, belly beating gets louder and the Japanese crowd starts to stir.This happens several more times. How does one know when they will actually square off? Spouse and I figured out the key clue. There is a man who sweeps the salt off the side of the dohyo. He has a sixth sense. When the roosters’ feathers are sufficiently fluffed, he stops sweeping and leaves the ring. Then comes the action. Whoever gets knocked down or knocked out of the ring loses. 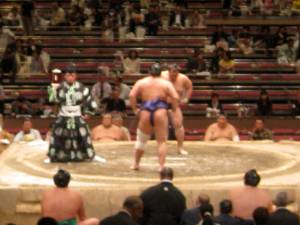 This is really entertaining. I have two favorite moves. In the first, one sumo simply steps aside as the other charges past and loses his balance. Really, how can that happen? Second, one sumo picks up the other by the belt (mawashi) and carries him out of the ring. I like this one because the sumo being carried is usually kicking his legs and looks similar to a huge baby. It truly is the little things in life that must be savored.

During key dramatic points in the action or when famous sumo would be ready to enter the ring, several banner bearers would enter the ring with scrolls. Spouse and I were concerned that we were missing key information regarding statistics on the sumo wrestlers until these scrolls were paraded around the ring: 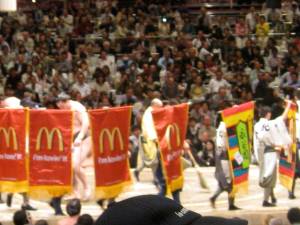 What I found most entertaining about sumo was the environment in which it is played. The seating area is set up on the floor. There are squares with four floor pillows in each square. Each person has a floor pillow within that square. Most westerners sit on the upper levels in the chairs. We sat with the Japanese on the floor which is the reason spouse and I can’t walk straight today. Food is available for pre-order so everyone can settle in for the day. Squeezed in to these small squares are 4 people and enough food and drink to feed 25. 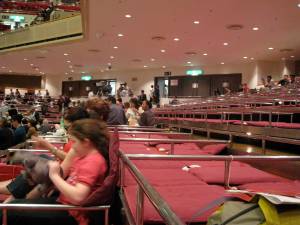 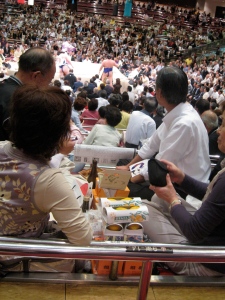 For us, it wouldn’t be a family outing without a faux pas. We all took off our shoes and climbed in our “Pod”. I noticed a Japanese woman below  turned around eying us disdainfully. She nudged the woman sitting in her pod who nodded agreement and clucked her tongue. I turned to spouse,” We’ve done something- what do you think it is?” We look around for spillage, checked our offspring for offensive behavior, nothing. She saw me frantically looking around and pointedly looked at our shoes with eyebrows raised. I turned to spouse- “It’s got to do with our feet!!!” He jumped up and grabbed a shoe from underneath our pod and raised it in the air questioningly. She motioned toward the top of our pod- we’d put our shoes in the wrong spot…

Like Loading...
This entry was posted in Culture Lessons, Uncategorized and tagged Culture, Moving, Sumo, Sumo Wrestling. Bookmark the permalink.