On Language- Why is it Hard to Learn Japanese?

You’ll be happy to know I’ve spent hours analysing why instead of learning how to… This is what I’ve decided on the much discussed issue of the difficulty of learning not only Japanese but an Asian language. I break from the traditional theories in that mine goes beyond the obvious.

Let’s go through the obvious- characters. Characters- or kanji- represent words and there are 2300 of them to learn. It takes the average Japanese native until high school to commit all to memory. In addition, there are Hiragana and Katakana – two systems of symbols representing sounds. Unlike our alphabet which would combine letters to make sounds- say g and a together make the GA sound, there are several characters that represent the various sounds that g and a can make when combined. In summary, lots of katakana 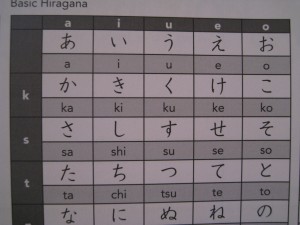 and hiragana representing every phonetic sound known combined with characters that all look the same. Hard. Obvious.

Second- and this is missed by most- syllables. Each word has an astounding number of syllables. I have taken the time to review a few commonly used words as examples.

Think about how that impacts a conversation. It makes a LONG sentence. The movie “Lost in Translation” has a nice example of this. The model scene. The Japanese director is going on and on in Japanese – it takes a good 3 minutes. The question is asked “What did he say?” and the answer is given “He said ‘ do like this’ ” I marvel when I listen to my words translated.

I propose its harder to commit longer words to memory than shorter ones. Who’s with me?

Next- sentence structure. It’s backwards. The subject and predicate are in different spots which makes it difficult to think as you speak. For instance.

Can you speak English? The order in Japanese is “English speak can you?”

This forces more memorization on to an already taxed brain.

Finally- pronunciation. Every Japanese person pronounces these words differently. Take for instance “ohayoo gozaimas.” Every Japanese person has their own spin on the pronunciation of this phrase. At our apartment building, one man just said “mas” to me every morning. Some people draw out the “oh” portion. One woman at a sushi restaurant would sing the gozaimas portion  but say the ohayoo part. When its hard to recognize the word because everyone says it differently I submit it makes learning the language difficult.

If your older than 14, your brain is too hardened to pick up language easily. Of course your children will pick up the nuances of the language immediately and soon adults will no longer talk to you but to your children. There is woman at a Chinese take out restaurant who refuses to talk me now. It’s either because I can’t converse with her and my kids can or because I accused her of cheating me out of 3000 yen when in actuality I can’t get the money counting right. When she sees me she cocks her head to the side as if to convey “YOU AGAIN” and turns her body sideways to block me then speaks directly to my offspring. I’m trying to redeem myself because the food is really good.

Before school started, I arranged three Japanese lessons. One for me and two for each offspring. The teacher thought it would be a good idea for us to be combined. I politely disagreed- mainly because I’d made plans. Not wanting to be rude, I succumbed to her point of view. We started. The teacher showed us pictures of people greeting one another at various times of the day. We were to go around the table and repeat the phrased. Offspring #1 repeated, so does offspring #2, I had difficulty. This took several minutes. Next was an exercise in giving a cab directions. Offspring #1 passed with flying colors, Offspring #2 surpassed sensei’s expectations, I had questions. I couldn’t pronounce “to my left” in Japanese. I repeated what sensei was saying over and over. What I said sounded just like what she said – not to her. The offspring started to laugh. Time marched on. Sensei decided it was best to separate us. Our lessons were individual from then on. Kids learn faster. I will be the first person to take 120 hours of Japanese and not learn any.

Like Loading...
This entry was posted in Culture Lessons and tagged characters, hiragana, Japanese language, katakana, sensei. Bookmark the permalink.

8 Responses to On Language- Why is it Hard to Learn Japanese?